"Too ridiculous": Cyclist reports motorist for driving on the pavement... and is threatened with fine for 'cycling on the footpath'

Police now say they have established that the cyclist "had been using a shared pavement", and won't be prosecuted ...
by Jack Sexty

Updated, 16:47: Avon and Somerset Police has now given a statement to road.cc. The original article appears below the statement.

"We have received video footage of an incident that occurred in near Castle Park, Bristol, on 24 February reportedly showing a motorist contravening regulations by driving a vehicle on the pavement.

"Enforcement action has been taken against the motorist.

"The person who submitted the footage was contacted by the investigator during the course of our enquiries because the clip showed them cycling on the pavement, where there were no markings or signs apparent showing they were permitted to do so.

"Following further correspondence, the investigator was able to establish the cyclist had been using a shared pavement and not contravening any regulations. No enforcement has been taken against the cyclist and no further action is planned.

"We are grateful for all submissions of potential motoring offences that are uploaded through our website. But people should be aware that if it is identified that the person submitting the footage has also committed an alleged offence, they may also be prosecuted. This is made clear on our website before a submission is made.”

A Bristol cyclist who submitted footage of a motorist driving across a pavement was told by a police officer that he himself was breaking the law by cycling on a footpath. The section of path in question occurs after a marked cycle lane off a roundabout in Bristol City Centre that ends abruptly, with most cyclists assuming that the unmarked path is shared use due to the lack of signage.

@BristolCouncil Surely this is a mistake? I have been told by the police that I have committed an offence by cycling here.
Apparently you can cycle to the end of the cycle path and then you cannot cycle any further?Surely this can't be correct? @BristolCycling @CyclistBristol pic.twitter.com/ZHgNcJio2m

That can't be, it's just too ridiculous.

That looks to be both the police and the council at fault really. Not clearly marked/signed that bicycles are allowed but also that they aren't.

The Old Market Roundabout in Bristol has a segregated central route for cyclists and pedestrians, and was described as "a safer, more accessible" route for those travelling to and from the city centre on bike or foot when Bristol City Council announced its completion last year.

The cyclist, Joe, says he was told by a police officer via email that the motorist, who was caught on camera driving across a pavement, would receive either a warning, fixed penalty or a prosecution; however, the officer also said that the footage supplied shown that Joe was in contravention of the Highways Act 1835 by "cycling on the footpath". The officer added that a defence solicitor for the motorist would point this out, therefore both the motoring and the cycling offence would result in a £50 fine.

Joe told road.cc that although it was "unclear" if he would definitely receive a fine, he assumed he would despite "a lot more back and forth as I tried to argue that I was not illegally cycling on the pavement." A number of people jumped to Joe's defence on social media, with locals suggesting that there are a number of features on the roundabout that imply the unmarked sections of path are shared use.

Referring to traffic lights on the other side of the roundabout, one commented: "The traffic lights ha[ve] a pedestrian and cyclist sign on them indicating that people on bikes are allowed there. Seems like they [Bristol City Council] forgot to stick up shared path signs there considering the traffic lights have the shared crossing signs.

"The bike path ahead of you also leads onto that bit of pavement with no "end of cycle lane" sign or markings anywhere. So you would be allowed to ride there. Again another sign that Bristol forgot to put up shared space signs."

Given the nearest pavement has a shared use sign, and there is no sign saying end of cycle path on the island stretch, I'd contest it pic.twitter.com/hj6GEYbsOz

Another pointed out that the 'nearest pavement' on Lower Castle Street has a shared use sign, which implies that the whole crossing is shared space. 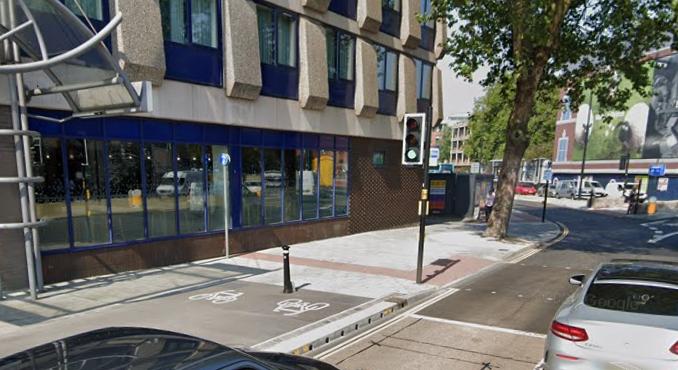 A number of people noted that other cycle lanes in Bristol (such as the one above near Bristol Temple Meads train station) don't 'join up', and this particular incident highlights the confusion among cyclists and the police about whether the cycle routes can be used legally.

Toby Wells, Co-Chair of the Bristol Cycling Campaign, told road.cc: "While we are slowly starting to see more cycling infrastructure delivered in Bristol City Centre, it often arrives in a very piecemeal fashion.

"There are many "missing links", like the one in Joe's images, where there is a clear intention to join up two sections of route but the money ran out. Often, cycle tracks give up at junctions, creating unnecessary conflicts between cyclists and pedestrians just at the point where safe infrastructure is needed the most.

"Our understanding is that the connection from Old Market Roundabout to Castle Park is intended as shared use at the moment, even if the signs aren't there, with a fully segregated path due to connect the two at some point in the future.

"Bristol needs a strong and continuous investment in cycling infrastructure, so that ambiguous "interim" situations like this don't have to occur."