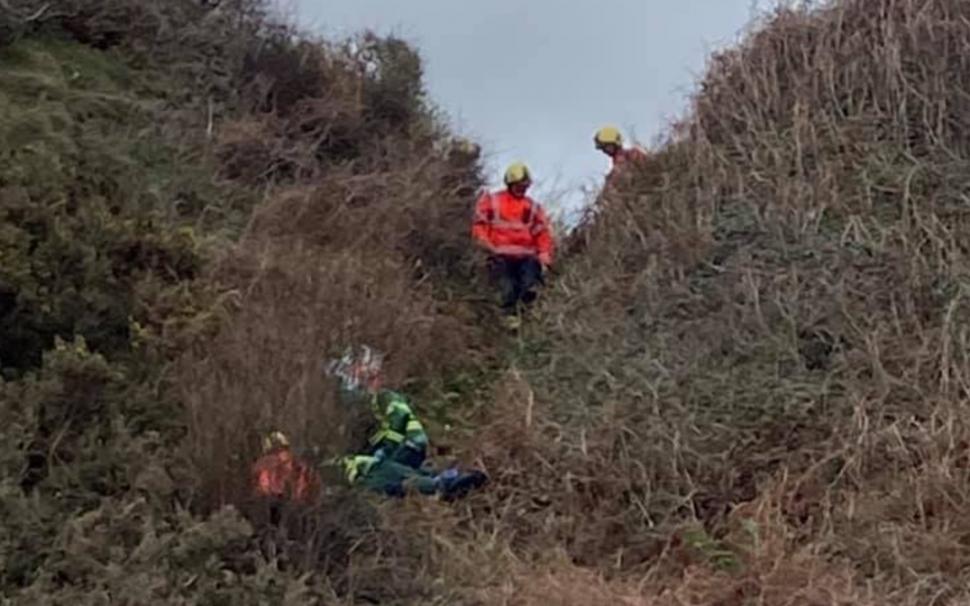 Rider's injuries are not expected to be serious, says Jersey Fire & Rescue...
by Simon_MacMichael

A woman taking part in a charity bike ride on Jersey was rescued by emergency services on Easter Monday after falling six metres down what was described as a “sheer” slope towards a cliff, with bushes breaking her fall ahead of a 20-metre drop to rocks below.

She had been participating in a 50-mile charity ride organised by the Jersey Reds Women rugby team in aid of a women’s shelter.

Only 4 more days until our charity fundraiser for Jersey Women's Refuge!! The women will be wearing our reds shirts for the challenge so keep an eye out for us 🔴 this event is supported by our sponsors @rossboroughins 🙌
Please follow the link to donate:https://t.co/Nejzz1cVDe pic.twitter.com/gRRM6ubJLX

The incident happened at around 11:30 in the morning close to cliffs at Greve de Lecq on the Channel Island, Jersey Fire & Rescue Service said on Facebook.

“A crew from the Western Fire station and a specialist Rescue Unit from HQ were immediately dispatched along with the Fire Duty Officer,” they said.

“On arrival, crews were met by the senior paramedic on scene whose description of the incident and casualties condition meant that we could get to work quickly with the appropriate Height Rescue Equipment.

“After securing the casualty, crews from the States of Jersey Ambulance Service and Jersey Fire and Rescue Service wearing Height Rescue safety systems were able to transport the casualty on to a rescue stretcher, safely to the ambulance.

“The casualty was later transported to hospital for an assessment. Whilst her injuries are not expected to be serious, it is without no doubt that because she was wearing a cycle helmet this really did prevent any serious head injuries occurring.”

“The safety of the casualty and our crews meant that we could work to the best and safest outcome.

“The terrain was difficult and within one metre a sheer drop from the edge to a further 20 metre drop to the rocks on the beach below.

“Thankfully the casualty was wearing a cycle helmet that prevented any serious injuries to her head,” he added.

The amount of protection a cycle helmet may provide in such circumstances is not proven, however.

Under European standard EN1078, which is identical to British Standard BS EN 1078, a cycle helmet must be designed to withstand an impact similar to an average rider travelling at 12mph falling onto a stationary kerb-shaped object from a height of 1 metre.