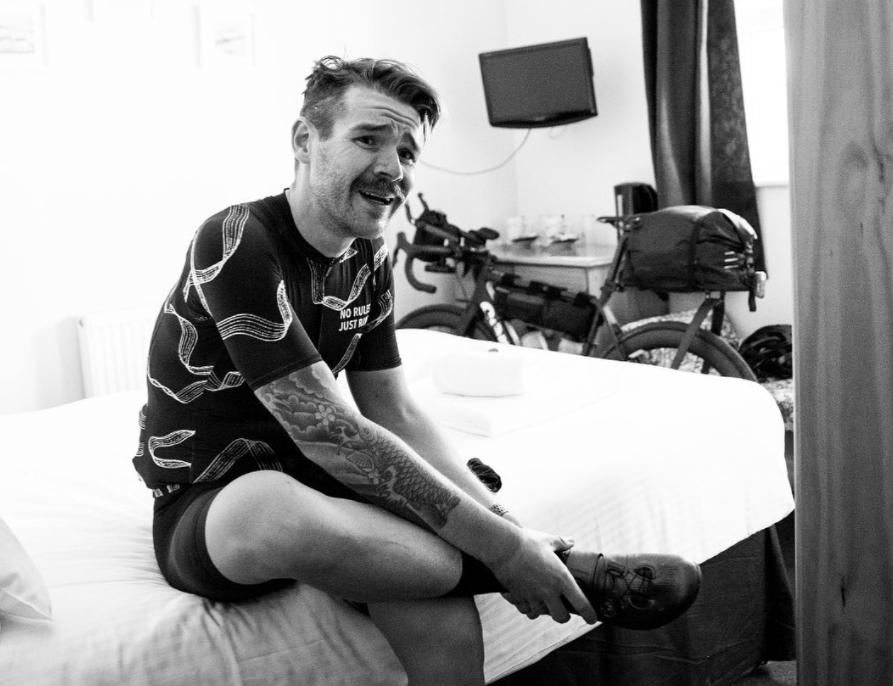 An endurance cyclist undertaking a charity ride between England’s most westerly and easterly points has called off the challenge after he was pushed off his bike in Andover, Hampshire, at the halfway point of his journey, saying that “It’s frustrating to stop but ultimately the safest call.”

Chris Hall, who in the past has competed in the National 24-Hour Time Trial Championship, had planned to ride from Land’s End in Cornwall to Ness Point in Lowestoft, a distance of 687 kilometres with more than 6,500 metres of climbing.

His Nuts & Bolts Ride was timed to coincide with testicular cancer awareness month and “to showcase, fundraise and highlight the incredible work carried out by Movember in changing the face of men’s health.”

However, this morning, after spending the night a few kilometres to the east of Andover in Whitchurch, and following discussions with the film crew following his ride but who were not present when he was attacked, he decided to call off the challenge.

In a post on Instagram, Hall told his followers: “As you may have seen from my stories, unfortunately during the night cycling through Andover I had a bunch of men decide it would be funny to try and push me off my bike. One of the group ran across to push me off, I think in attempt to steal the bike or just to have a laugh at my expense.

“At this point I was probably about 350 kilometres into the challenge with close to 6,000 metres of climbing. I was pretty exhausted and on the limit as it was. When I next saw the guys filming, around 10:30pm I was pretty emotional and we decided to stop and get some sleep for the night and have a think about what to do in the morning.

“After a chat with a few friends and the guys filming we decided to pull the pin on the challenge. The final stats were about 400km with over 6,050 meters of elevation in just over 15 hours. Quite frankly my head was not in it any more and feeling nervous on the bike and already pretty fatigued, silly mistakes can easily happen and it’s not worth the risk.

“Movember are all about men talking honestly about how they are feeling so I’m posting this for just those reasons,” Hall continued. “I was knackered when it happened, so things always feel a lot worse when you’re exhausted but I woke up feeling just as anxious, nervous and more than anything completely violated in my own personal space.

“I’m a big guy, 5ft 11 and covered in tattoos so it’s rare people try to intimidate me but it also means sometimes because of that I am a target when I’m on my own too. I can’t begin to imagine how it would feel for someone smaller, of a different gender or race and it truly saddens me that people can be like that.”

Thanking his followers for their words of support, he added: “It’s hugely appreciated and nice to know that there is good in the world too. It’s frustrating to stop but ultimately the safest call.”

Hall also directed supporters towards the donation page for Movember, which you can find here.

In 2017, Hall raised over £9,000 by riding 107 kilometres for 107 days to raise awareness and money for the 107 children supported by The Pace Centre in Aylesbury, Buckinghamshire, which helps children with cerebral palsy and their families. Last year, during the 107th edition of the Tour de France, Hall rode a minimum of 107 miles (172km) a day during each stage day of the Tour, riding from London, to Land’s End, to John o' Groats and then back to London again. For this challenge, Hall raised more than £12,000 for The Pace Centre.

1
"Check the Highway Code": Police officer claims cyclist shouldn't ride "in the middle of the road"
2
Hit-and-run driver moved unconscious cyclist off road before fleeing scene
3
Road rage van driver who assaulted cyclist, knocking him unconscious, handed suspended sentence
4
Why was Mark Cavendish riding with Lance Armstrong this week?
5
Five-year-old boy killed after van driver knocks him off bike
6
Want the “fastest socks on the planet”? They’re yours for €1,000 + more tech news from Campagnolo, Rapha, Van Nicholas...
7
Near Miss of the Day 827: Bus driver “bullies his way into a gap that was never there”.
8
Cyclist hurt after eggs thrown at her by car passenger