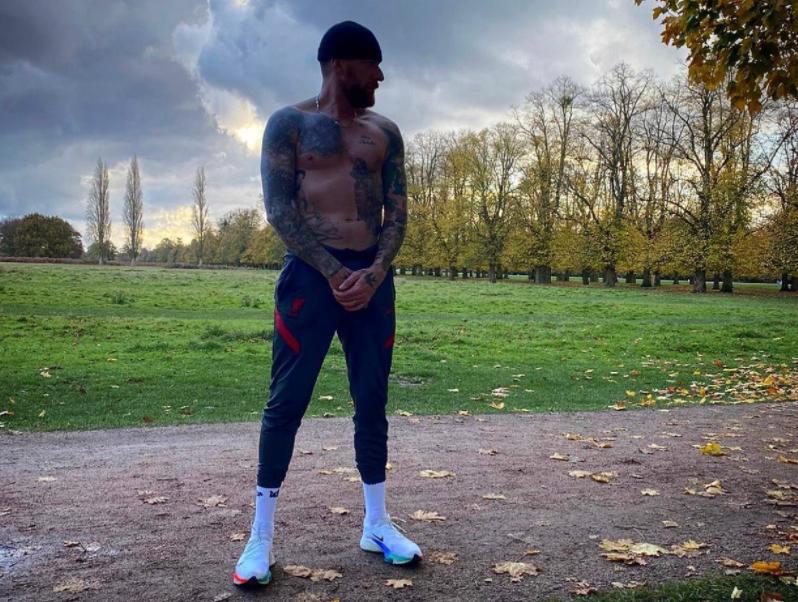 Shea Gribbon was surprised to find out that Sir Bradley Wiggins is a fan of his work. The Irish graduate, who set up his custom designed cycling shoe business while at Coventry University, found out Wiggo had bought a pair of his shoes when he spotted a pair of the socks Shea throws in with every order in a picture Brad posted on Twitter.

"Bradley happened to pull on the pair of socks I sent to his son before going out for a run one morning and shared a picture of himself on social media wearing them. That was pretty cool to see, and proved to be great promotion for my business," Shea explained.

The Shoe Dr. has also made a custom design for Harry Tanfield ahead of La Vuelta a España. Wiggins was in the news today after CyclingWeekly reported he had liquidated a third company with debts of £141,000. In October he liquidated two other companies which had debts of over £1 million. 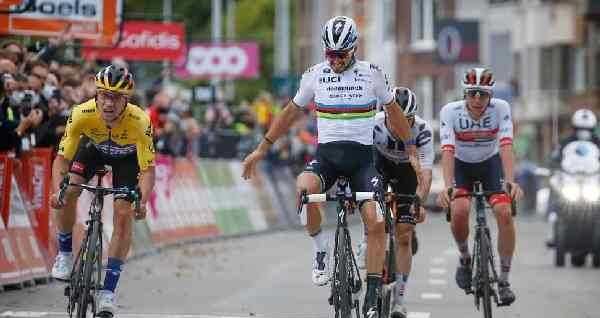 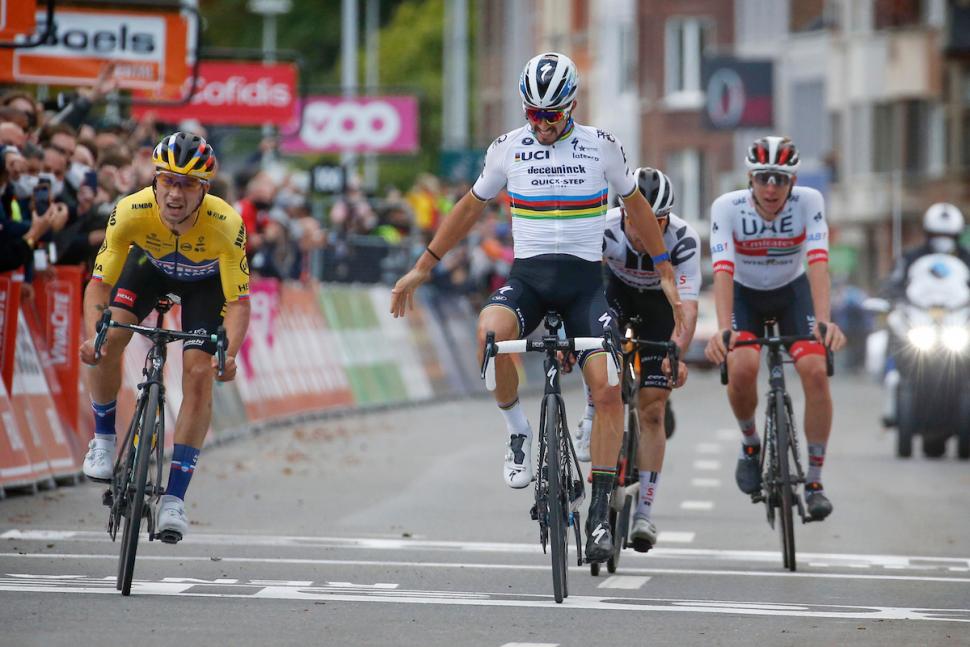 Primoz Roglic has won Vélo magazine's prestigious Vélo d’Or prize for best cyclist of the year. Julian Alaphilippe was awarded the best French rider prize for the second-consecutive year. Roglic won four stages of the Vuelta a España, the race overall, Liège–Bastogne–Liège and was second at the Tour de France this year. Taking the prize from Alaphilippe, Roglic was humbled to win the award: "I went through the list of previous winners and saw it's really an important award," Roglic told L'Equipe.

"I want to take this opportunity to say a big thank you to the people who voted for me. I understood that it was a jury of journalists from all over the world, that's why it really touches me."

Alaphilippe did not come away empty handed, however, as he was awarded the French Vélo d’Or honour after a year that culminated in him becoming world champion in Imola.

"Primoz Roglic amply deserves this trophy. Last year, I had a big, big season to win it. It is in the logic of things that he wins it this year," Alaphilippe conceded.

"Winning the Vélo d’Or Français makes me very happy, it’s nice to see that my results didn’t go unnoticed and I was again named best French rider of the year, thus getting another trophy. This season has been a special and different one, with plenty of challenges, but I managed to achieve many of my goals and I can be satisfied with what I did, the world title I won in Italy being, of course, the cherry on the top.

"The rainbow jersey is the most beautiful in the world and wearing it in a few races before the season ended made me realise what a huge honour it is to have it. This gives me a lot of motivation for next year." The Hertfordshire Mercury reports that Bedfordshire Police are investigating an ambush robbery which saw a cyclist pushed off and their bike stolen by three men in Bedford. At around 6pm last Wednesday, November 25, the man was surrounded while riding on a cycle path on the outskirts of the town. One of the men pushed the cyclist off and the offenders quickly left the scene with the Carrera mountain bike pictured above.

Investigation Officer Alex Purffett said: "We are appealing to anyone who saw this incident or who has any information about these three men to come forward as this could help us with our enquiries.

"If you have been offered or seen a bike matching this description for sale, please get in touch. We do not tolerate this type of behaviour and we will do all we can to find those responsible.” These radically-shaped bars are currently UCI legal... do you think they should be?
20
03 December 2020, 12:59
Former Tour de France leader Rinaldo Nocentini banned for doping offence L'Équipe reports that former Tour de France yellow jersey wearer, Rinaldo Nocentini, has received a four-year ban for a doping offence. The Italian is now retired from the sport but claims to be innocent. Speaking to TuttoBici, he said: "At 41, why should I have resorted to prohibited practices? They are not part of my working method or my values. In my career I have undergone all kinds of checks and nothing has ever turned out.

"In the many years in which I have been a professional there have been inquiries like Operation Puerto and those concerning Dr. Ferrari, I have never been brought up in any case and in no interception, being disqualified now so heavily seems to me something out of this world.”

As a professional, Nocentini spent nine years with AG2R La Mondiale and wore the yellow jersey for eight days at the 2009 Tour de France. He took the jersey from the breakaway on Stage 7 in Andorra and held it through the second week before losing it to eventual race winner Alberto Contador following the Spaniard's famous Stage 15 attack to win the summit finish at Verbier. 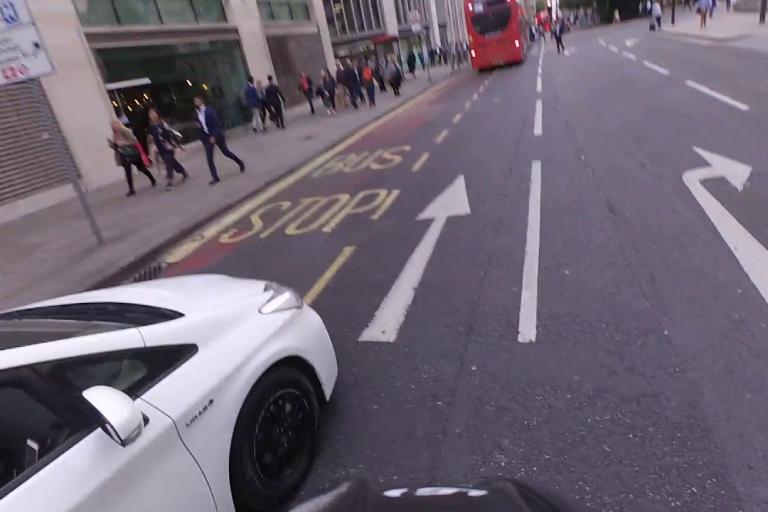 London’s road to recovery cannot be clogged with cars. It has to be one Londoners can walk and cycle down as part of a greener, cleaner, healthier future.

Mayor of London, Sadiq Khan, once again expressed his support for cycling infrastructure and said that "London's road to recovery cannot be clogged with cars." Answering questions on James O'Brien's LBC show, Khan said he was disappointed to see Kensington and Chelsea council approve the removal of the High Street cycle lane after a short trial period because of complaints from businesses and residents.

Khan said that many of the complaints weren't from residents, or even people who live in London. Answering a question about Kensington High Street, he said: "I've started to cycle again over the course of the last few months. I feel far more safe and confident cycling around our city now and what we've got to avoid is a car-led recovery.

"The short answer is that Kensington High Street is the responsibility of the council. We're trying to persuade them to do the right thing for thousands of cyclists. We want to avoid a car-led recovery that leads to more carbon monoxide, nitrogen dioxide and London coming to a gridlock. We want more people walking and cycling, particularly because of our concerns about using public transport at rush hour.

"This council has persistently refused to have cycle lanes in their borough. This cycle lane is working really well, it's used by thousands of cyclists who feel safer using it. The council is ripping it out because a few people have signed a petition, many of them aren't residents and aren't even Londoners.

"We should let the cycle lane be in for some time and see how it works out. After a few months we can review it. We have already tweaked some across the city because there were issues. This seems to be a knee-jerk response which I'm definitely against."

We are thrilled to confirm that former @lavuelta champion @FabioAru1 will join Team Qhubeka ASSOS.

Despite the rumours that Qhubeka Assos will have one of the smallest budgets in the WorldTour next season, Doug Ryder's team have managed to attract a big name for 2021. Fabio Aru joins and will hope to recapture the form that saw him win the Vuelta a España in 2015, twice finish on the podium at the Giro d'Italia and come fifth at the Tour de France. The Italian has struggled in recent times and hasn't finished in the top-10 of a Grand Tour since 2017 but will ride for the team next season alongside other recent signings Simon Clarke and Harry Tanfield.

"I am absolutely delighted to be joining Team Qhubeka Assos next season and very grateful to Douglas Ryder who welcomed me to his team," Aru said.

"When the possibility to sign first came about, and then after speaking with Douglas and other team members, I immediately felt that this was an environment that I wanted to be a part of. In the last few years I haven’t experienced all of the success that I’d hoped for and so I will use this new step to draw from some of the simple factors that saw me achieve those results, as I know that I’m capable again of similar success.

"At this point in my career Team Qhubeka Assos is the perfect place for me to do so and I’m very grateful for the opportunity that they’ve provided me with to contribute to their legacy and to build on that fantastic work that they’ve done in the past."

The BBC reports that bikes could be in short supply this Christmas after a year when sales have rocketed as people sought outdoor exercise during the pandemic. To make matters worse, many manufacturers struggled to keep up when factories were forced to close as part of lockdown restrictions. Consequently some manufacturers now have huge backlogs to deal with during one of their busiest times of the year.

Paul Tomlinson, cycling director of Halfords, said: "There has been huge interest in cycling as the public seek alternatives to public transport and as a way of keeping fit. And as a result we've seen a massive surge in demand, with sales of bikes and cycling products up."

UK brand, Raleigh, were one of the manufacturers that struggled with factory closures. Managing director, Lee Kidger explained the problem saying: "There have been delays in products coming to the market, but the consumer appetite for bikes remains high. As consumers begin ticking off their Christmas shopping lists, there will likely be a shortage of bikes leading up to Christmas."

Illegal destruction by @RBKC of the segregated cycleway halted for one night by stopping works.

Works to remove the bollards on Kensington High Street and reopen both lanes to motor traffic were delayed last night by a protest from Extinction Rebellion and Stop Killing Cyclists. The group blocked the lane and prevented the removal of infrastructure. Council documents show that of the first 1,000 emails they received about the lane, 58 per cent were in favour of it which some have suggested casts doubt on the council's claim that a large number of complaints was the reason for its planned removal.

The protesters then moved to Northcliffe House, the office of the Daily Mail and MailOnline. Yesterday a MailOnline employee called on the council to reverse their decision. Five local schools and Imperial College Union also expressed their support for the cycle lane, while the Kensington Business Forum released a statement saying the council's claim that the Forum asked for the lane to be removed was not true.

BREAKING: The Kensington High Street cycle lane will not be removed tonight 🎉🤸🏽‍♀️