Welcome to our first post-Christmas live blog, with Simon MacMichael 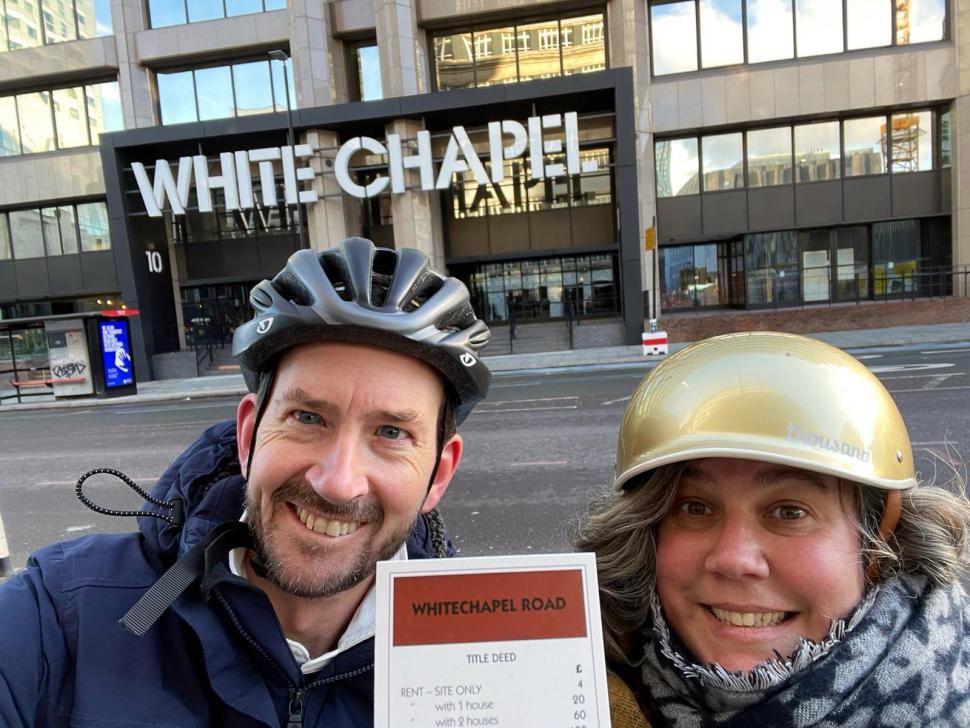 London deputy mayor for transport Heidi Alexander has come under criticism for a bike ride yesterday around the streets that feature on the Monopoly board – although one of the critics, who surprisingly happens to be a black cab driver, seems to be under the impression that cyclists ride at a speed of less than two and a half miles an hour.

Cycled the Monopoly Board today - although we didn’t go to a jail, the waterworks or an electric company ... pic.twitter.com/hyccba5F0b

The former Lewisham East Labour MP, who resigned from that seat when she joined Sadiq Khan’s team at City Hall in 2018, tweeted pictures from her ride, holding up Monopoly title deed cards from some of the locations she visited, such as Euston Road and Pentonville Road

(Fun fact … you can take selfies of street signs of both of those within a few metres of each other by Kings Cross Station, another property on the board).

A bit of a Twitter pile-on ensued, accusing Alexander of breaking Tier 4 rules … although there are no limits on time spent exercising such as riding a bike, and Park Lane, the furthest point west on the board, is within easy reach by bike of her home.

Unless, like this Twitter user, who happens to be a black cab driver, you believe that cyclists average a speed well below that of someone walking round the city.

And as for his comment, “Who is that with Heidi is he a part of her household and or support bubble? I highly doubt it” – we’re pretty sure that’s her husband, Martin Ballantyne.

Who is that with Heidi is he a part of her household and or support bubble? I highly doubt it. Also the guidance is to exercise in your local area ie the nearest green space to where you live. 5 miles is excessive and would take over 2 hours on a bike

From our point of view, kudos to Alexander for adding a bit of fun to a bike ride that, with a member of her household, is permitted under the current rules ... there's no Go To Jail card from us on this one. Two UCI WorldTour pro cyclists got belated and very much unwanted belated Christmas presents when they were injured after being knocked off their bikes in separate incidents that happened within the space of 24 hours, reports Spanish newspaper, AS.

Portuguese rider Ruben Guerreiro of EF Pro Cycling – pictured above winning Stage 9 of this year’s Giro d’Italia – sustained a broken collarbone when a motorist turned across his path.

“I was training with some friends when, in the Vendas Nova-Alentejo region a car coming from the front turned left without respecting the traffic code, making the collision inevitable,” he said.

“I don't know if the driver didn’t see us, or if she thought that everything would be fine, but the truth is that the incident happened and she was at fault.

UAE Team Emirates rider Conti, meanwhile, a past Vuelta a Espana stage winner and wearer of the race leader’s maglia rosa at the Giro d’Italia, was thrown into a wall when he was hit by a motorcyclist near his Monaco home.

Camphin-en-Pévèle, one of the most famous cobbled sectors of Paris-Roubaix, is being ripped up and replaced by a smoothly surfaced cycleway.

Or at least it is, if you believe this post made to Twitter today, saying that "the year couldn't end worse for the Amis du Paris-Roubaix" - the volunteers who restore the paved sectors each year - adding that "the mayor of Camphin-en-Pévèle has decided that half of the famous four-star stretch of Paris-Roubaix will be converted into a cycle lane so children can get to school safely,"

The original language of the tweet gives a strong hint that all is not as it seems - today, 28 December, is Holy Innocents Day, the equivalent of April Fools' Day for the Spanish-speaking world.

Here's the moment a cyclist in Singapore who was rubbernecking as he passed a crashed lorry, turning to take another look at the scene after taking pictures of it on his mobile phone, himself crashed into the back of a parked car.

The video, presumably shot by a rear-facing camera on the bike of one of the riders out with the hapless cyclist, was uploaded to the SG Road Vigilante YouTube channel where, to put it mildly, the bike rider is attracting a fair bit of derision.

The initial crash, involving two lorries happened yesterday morning on Yishun Dam, reports Asiaone.com, with one of the drivers taken to hospital.

The cyclist who hit the car, apparently breaking its rear windscreen according to a police report filed by the vehicle’s owner, reportedly fled the scene.

Since August this year, cyclists in Singapore are banned from holding or using mobile phones while riding, facing a maximum penalty of three months’ imprisonment or a $1,000 fine.

It was a bit of a cold one overnight in southwest London, and it's hardly scorchio weather now, with police closing Sawyer's Hill in Richmond Park due to ice on the road ... wherever you are, take care out there today!

#RoadClosed We have temporarily shut Sawyers Hill in #RichmondPark due to ice on the roads after concerns were raised by park users. pic.twitter.com/lG5bAwlEBM

It's been a big year for Alex Dowsett, with a career-saving solo stage win at the Giro d'Italia securing him a two-year contract extension with Israel Start-Up Nation, and partner Chanel due to give birth to their first child last month ... and now he has revealed his Strava stats for the year, describing them as “insane.”

He's based in Andorra these days, which helps explain much of that climbing stat – with just under a third (8,062km) of his total distance for the year being ridden during races, it’s a safe bet he wouldn’t have got near that amount of climbing back in Essex.

Please note, of those ms climbed, not a single one of them was done in the form of an everesting attempt. The @Strava stat is insane. This year more than any other I’ve noticed just how supported from far and wide Chanel and I are & we appreciate it greatly. Bring on 2021! pic.twitter.com/aGbduf7a5K

“If 2020 was a cyclo-cross race” – that is the caption to this tweet from Belgian broadcaster Sporza following a very muddy Round 3 of the World Cup at Dendermonde yesterday, where as well as a quagmire, the riders also had to cope with high winds.

Victory in the men's race went to Wout Van Aert, who takes over the lead of the competition.

. @WoutvanAert was unstoppable in Dendermonde and takes over the top spot in the #CXWorldCup pic.twitter.com/VqZCmDVEpG

The women's race, meanwhile was won by Lucinda Brand, maintaining her 100 per cent record with her third successive win with just two rounds remaining in this season's shortened competition.