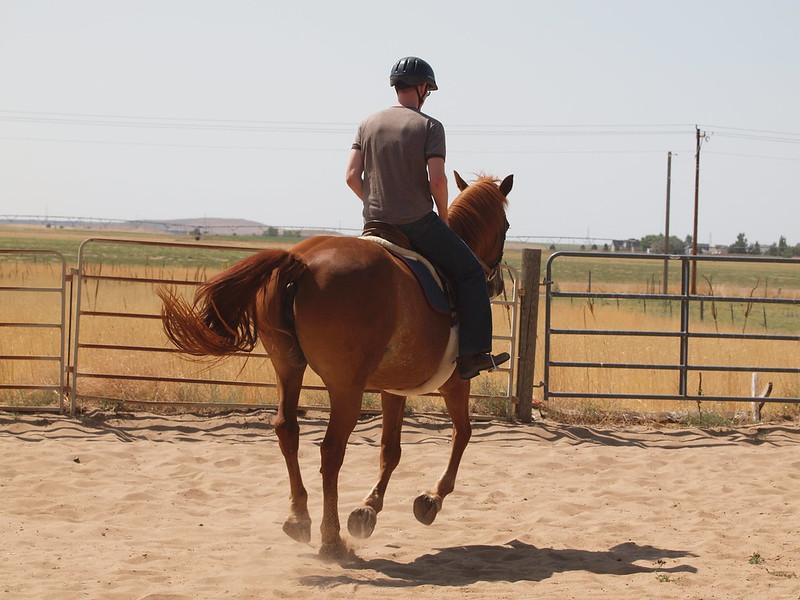 A ​Hertfordshire woman who says she was thrown from her horse when a group of cyclists came round the corner on a gravel track has called for people on bikes to ride responsibly and look out for horse riders.

The Herts Advertiser reports that Carolyn Tuck, aged 62, was riding her horse on a bridleway at Bricket Wood, near St Albans, when six cyclists, in her words, “came around the blind corner at 20mph.”

She said her 20-year-old horse, Chino, was struck by one of the cyclists, causing it to bolt, which resulted in her being thrown out of the saddle.

“They nearly killed me,” she said. “They came around this bend and crashed into me and my horse. My horse chucked me over the hedge and left me for dead.

“They carried on, and one bloke couldn't get past. My friends all bolted off and disappeared on the horizon, and I was staggering down the hill – semi-conscious – and this guy is saying ‘Can I get past you?’.

“They came around the blind corner at 20mph, on gravel and didn't even anticipate that something could be coming around the corner. It could’ve been a post office van, a child ... anything. But they hit me on my horse.”

She said that some cyclists, such as the ones she encountered, “just don’t care,” but acknowledged, “most cyclists are fairly good and kind,” adding, “I don't want to punish good cyclists, I just want them to be aware to not treat horses like they are machines.”

In 2018, the British Horse Society and Cycling UK partnered on a video showing cyclists how to pass horses safely, and published a leaflet containing guidance on the issue.

The collaboration was launched after footage emerged on social media of a competitor descending at speed during the bike leg of the Windsor Triathlon striking a horse as he undertook the animal and its rider.

At the time the video was launched, Duncan Dollimore, head of campaigns at Cycling UK, said: “Every time a cyclist encounters a horse, there are three brains involved: the cyclist’s, the rider’s and the horse’s.

“Many people aren’t familiar with horses, and there can be confusion on what they should do when overtaking on a bike.

“Cyclists may already know to pass wide and slow when it’s safe to do so – but they could still startle the horse unless the horse and rider are made aware of your presence.

“Generally, if a cyclist startles a horse, it is due to simple lack of awareness that a horse needs more time to react, which is why Cycling UK is pleased to be helping the BHS promote the consideration and courtesy message of ’Be nice, say hi’.”

Alan Hiscox, director of safety at the BHS, commented: “We’re thrilled to be collaborating with Cycling UK as both groups are vulnerable road users and will benefit from working together to share the roads.

“We are encouraging riders to respond positively to cyclists who pass with consideration and reciprocate their courtesy.

“Horses are flight animals and may react to anything they are unsure of. By promoting the ‘Be nice, say hi’ message, we hope more cyclists will appreciate the potential risk they pose.”

He added: “If all road users are considerate and mindful of one another we can reduce the number of incidents between horses, cyclists and vehicles.”