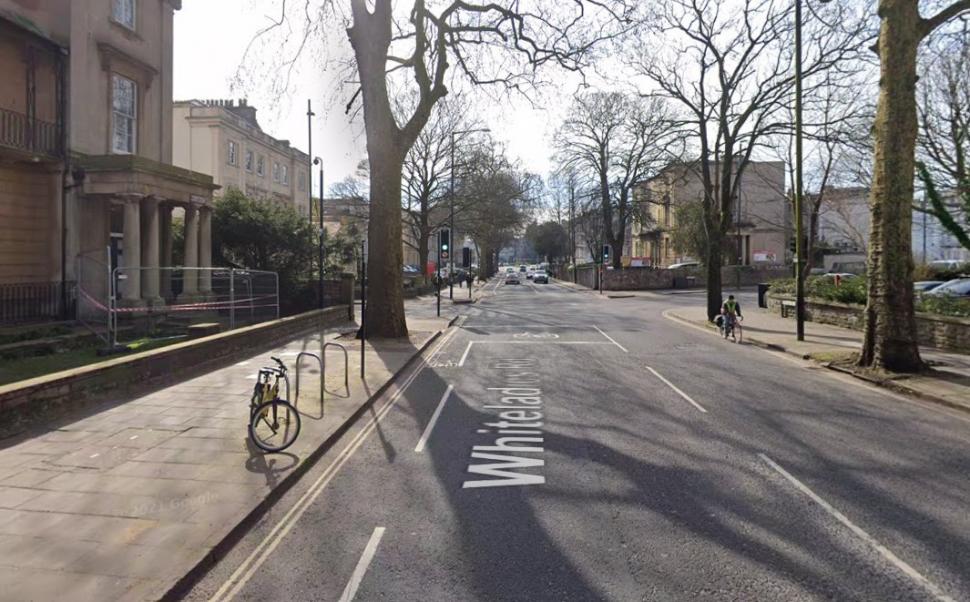 Bristol City Council has devised a new draft plan to alleviate the risk of flooding on Whiteladies Road, caused by drainage issues, while also retaining the bike lanes
by Ryan Mallon

Plans to remove a key cycle lane in Bristol – which the city council claimed would help alleviate the risk of flooding on the road – have been scrapped.

Whiteladies Road, a key approach to Bristol city centre from the north west with a much-used cycle lane, regularly floods when there is rain due to water running downhill from adjacent roads that have blocked drains. Water levels of up to 18 inches caused by the blocked drains have made conditions hazardous for cyclists and motorists, as well as pedestrians.

Earlier this year, we reported that Bristol City Council was consulting on whether to tackle the risk of flash floods by installing grass verges to soak up rainwater, as well as a drainage channel, through widening the footway on either side of the road.

This plan, however, was widely criticised by local cyclists and active travel campaigners, who pointed out that the scheme meant that there would no longer be space for the cycle lanes running in each direction.

Councillor Don Alexander, who holds the transport portfolio at the Labour-controlled council, said at the time that removing the cycle lanes was “a last resort… but the lack of space in this area means we need to consider it.”

Vassili Papastavrou, secretary of the Bristol Tree Forum who raised concerns over the potential scrapping of the cycle lane on Whiteladies Road in a lengthy thread on Twitter, told road.cc that he had “never heard of a cycle lane causing flooding before,” and suggested that “it might be a world first.”

However, following the widespread condemnation of the scheme from cycling campaigners and other councillors – including the Green Party’s Emma Edwards, who first raised the issues with drainage at the end of 2021 – the council has dropped their initials controversial plans to remove the cycle lanes.

Further to public consultation on Whiteladies Rd that included removal of bike lanes. We were delighted to see the latest draft plan shown to us at a meeting today with @BristolDon & @BristolCouncil officers, included retention of dedicated cycle lanes on both sides of road🧵1/3 pic.twitter.com/1iX2DmOIoq

Liberal Democrat councillor Andrew Varney, who said he was “glad” that the bike lanes were being retained, told the BBC: “Whiteladies Road is a key route into the city and needs decent cycling infrastructure if we are to encourage active travel and reduce car dependency.”

The Bristol Cycling Campaign also welcomed the news, writing on Twitter: “We were delighted to see the latest draft plan shown to us at a meeting today with [councillor Don Alexander] and Bristol City council officers, included retention of dedicated cycle lanes on both sides of the road.

“Cllr Alexander explained there was still a lengthy process and many stages to go through to deliver the final plan.

“Our thanks to Cllr Alexander and Bristol City Council for maintaining a constructive dialogue on the Whiteladies Road flood alleviation and footpath scheme, and also to our supporters for their responses to the process.”

> “How can removing cycle lanes ever be justified?” Council blasted for getting rid of bike lane… so motorists can “park on pavement more easily”

In August, we reported on the blog that Bristol City Council was once again under fire for removing a bike lane on the Cheltenham Road towards the junction with Ashley Road.

In an article for the news site Bristol 24/7, editor Martin Booth described the lane as “of poor quality and in desperate need of improvement. But it was still a cycle lane.”

Booth noted that the recent ‘improvements’ to the junction – which the council even admitted might prove “contentious” – have resulted in a wider pavement, which according to the writer has not improved pedestrian safety but simply allowed motorists to park their cars more easily.

Fantastic to see drivers being able to park their cars more easily on the wider pavements on Cheltenham Road, and no cycle lane to get in their way any more either pic.twitter.com/gU2wrv6MC5

According to Booth, the extended works on the Ashley Road “have mostly just moved the crossings by a few metres, widened a few short stretches of pavement and removed a cycle lane: all seemingly for the benefit of car drivers… By widening the footway, all it has done is make it easier for cars to park. And I have yet to see the double-yellow lines ever be enforced.”

Lamenting Bristol’s apparent fall from its status 14 years ago as Britain’s ‘first cycling city’, the news editor also questioned whether “removing cycle lanes can ever be justified” and argued that “safe cycling needs to be prioritised across our city”.

“Even a crap cycle lane is better than no cycle lane at all,” he concluded.