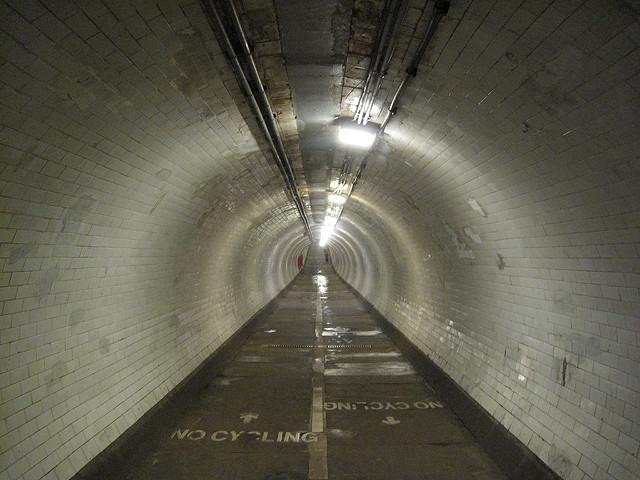 A Tower Hamlets councillor last week claimed that there has been a surge in “illegal” and “increasingly dangerous” cycling through Greenwich foot tunnel, amid calls for any measures which would allow cyclists to ride in the tunnel – which forms part of National Cycle Route 1 – to be subject to a “rigorous” health and safety assessment.

Another member of the council also called for barriers to be installed along the path to stop cyclists “zooming across from one end of the tunnel to the other”.

However, Green Party councillor Nathalie Bienfait argued that the discussion only served to give “unhelpful airtime to the false narrative that cyclists are fundamentally irresponsible and lawless”.

Over the past few decades, with the development of the financial district centred on Canary Wharf, London’s north-south Greenwich tunnel has become a key commuting link for people who work there but live south of the Thames, given the lack of other convenient crossings in the area.

But despite forming part of National Cycle Route 1, linking Dover and the Scottish Highlands, cyclists are currently only allowed to walk their bikes through the tunnel (since 2014, bikes have been permitted on Docklands Light Railway trains, but only at off-peak times).

In 2017, Labour-controlled Greenwich Council, which is responsible for maintaining the tunnel, sanctioned plans to allow cyclists to ride through it at certain times, a proposal which requires approval from its joint owner Tower Hamlets Council, where the Aspire Party, which last year ripped out a school street in the borough, has the majority.

Despite electronic signs being tested in the tunnels, indicating when cyclists can use them, the scheme has faced opposition from Tower Hamlets Council, with Conservative councillor Peter Golds arguing at the time of the initial proposal that the Edwardian tunnel “was never designed for cycling”.

A user group for the tunnel was disbanded two years ago, as members expressed their frustration at the lack of progress in resolving the cycling issue, as well as problems with the tunnel’s lifts, which were installed in 2010 during a much-criticised refurbishment.

The proposals once again came under the microscope in a meeting of Tower Hamlets Council last week, as Tory councillor Golds claimed that there was “huge popular support” in the area for “rigorous” health and safety checks to be implemented before any ban on cycling in Greenwich foot tunnel is lifted, the News Shopper reports.

“The Greenwich Foot Tunnel is a major issue and major problem,” Gold told the council. “The issue here is the growth of illegal cycling in the foot tunnel which is increasingly dangerous.

“We constantly get issues of families going through the foot tunnel and suddenly finding people coming towards them, shooting through at speed on bicycles, frequently blowing whistles to expect people to get out of the way.”

Golds also singled out the “irritating little Deliveroo pop-pop-pop bikes shooting through the tunnel and trying to shoot people out of the way”.

“It’s not acceptable,” he said.

Labour’s Abdal Ullah echoed the Conservative councillor’s point, and claimed that, thanks to cyclists, the tunnel was “difficult and dangerous” for those with children.

Ullah then called for barriers to be put in place inside the tunnel to prevent “dangerous” cycling.

“If we put barriers along our path, hopefully Greenwich will follow suit in putting up barriers that would stop people zooming across from one end of the tunnel to the other,” he said. “So I would really urge that we, as a council, write to the relevant people in Greenwich and say, look, meet us halfway.

“It’s not an attack on cyclists,” said the councillor, whose father sustained fatal injuries when he was hit by a competitor at the London Triathlon in 2009, with organisers IMG Events subsequently fined £300,000 for health and safety breaches.

“Although one killed my father, I have no grudges against cyclists. But it is dangerous, especially now with more and more people wearing headphones that you can’t hear the noise. You can’t hear the bell.”

> Children take to the barricades to save School Street

Another Labour councillor, Mufadeen Bustin, said that while views in her Island Gardens ward were split on allowing cyclists in the tunnel, she believes that the “joy” of using the tunnels is “taken away when a cyclist whizzes past, almost knocking you over”.

However, Green Party councillor Nathalie Bienfait argued that Golds’ motion and the subsequent discussion gave “unhelpful airtime to the false narrative that cyclists are fundamentally irresponsible and lawless”.

She added: ““There is no safe north-south route for cyclists or pedestrians east of Tower Bridge. The Greenwich and Woolwich foot tunnels are used daily by hundreds of commuters who are, for the most part, respectful of the safety of pedestrians.

“The idea that cyclists are fundamentally unsafe for pedestrians is simply untrue and has to be challenged.

“Enforcement of byelaws prohibiting cycling in the tunnel is definitely important, but the protection of a quick and convenient route is something that I would like to support.”

Despite Bienfait’s plea, Kabir Ahmed, a member of Lutfur Rahman’s Aspire party and Tower Hamlets’ cabinet member for regeneration, dismissed the idea that by criticising “dangerous” cyclists in the Greenwich foot tunnel, the council was attacking everyone who rides bikes.

“I think this is a serious issue,” he said. “I’m quite surprised how a motion regarding dangerous cyclists zooming across pedestrianised areas suddenly becomes an attack on all cyclists. That’s not the case.

“If cycles need to be taken, they can walk with the cycles in their hand and carry it along just like all the other pedestrians.

Following the discussion, Tower Hamlets’ councillors voted to pass Golds’ motion calling for health and safety checks in the tunnel.