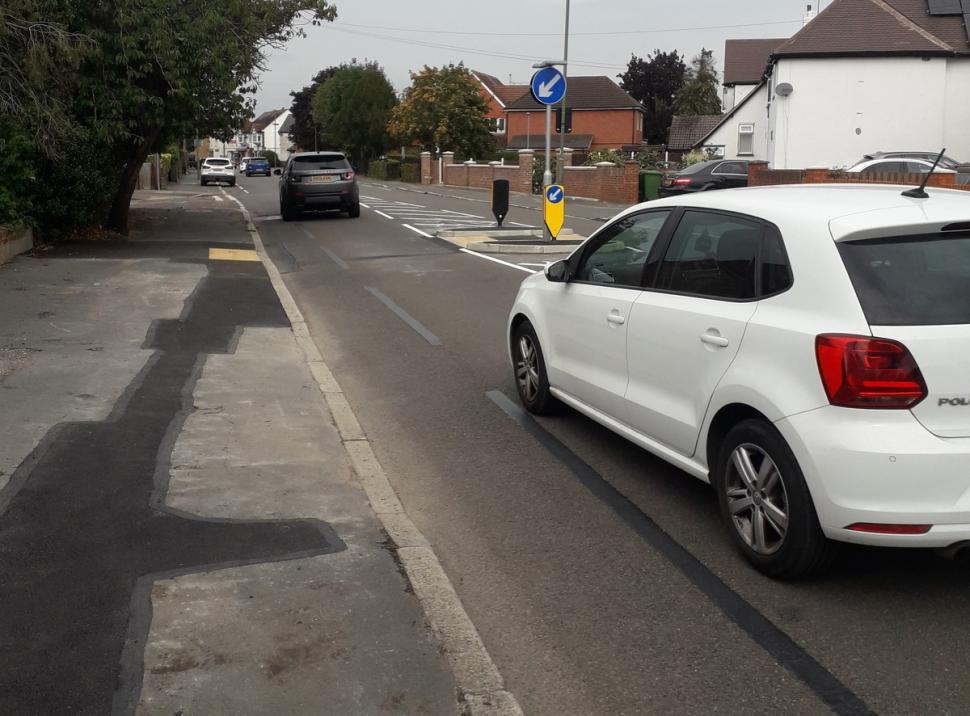 B376 towards Staines (Credit Ken Saunders)

With the installation of a newly-built pedestrian crossing, local cyclists noticed drivers swerving into the painted cycle lane, sometimes hitting the kerb, but it's the council's solution that has confused many...
by Dan Alexander

A new pedestrian refuge being installed on a busy road should have been a victory for active travel in Staines-upon-Thames in Surrey, however the council's subsequent response to reports of drivers swerving into a cycle lane to avoid it, and sometimes hitting the kerb, has been anything but in the eyes of some local riders.

road.cc reader Ken got in touch to share the story, saying the pedestrian refuge "on a very popular route for cycling groups" was only a few weeks old when it was "immediately seen as a hazard, with cars clearly having hit the kerbs".

"The gap between the main footpath each side and the refuge is so narrow that drivers invariably swing left at the 30 mph limit, but often faster, over the broken line on the bike lane," he explained. "Numerous local cyclists were concerned that cars would swing into groups or individual cyclists — an accident waiting to happen! I raised these concerns with my local county councillor who passed these concerns on to the county highways office. Their action? To crudely paint out the broken white lines of the bike lane adjacent to the refuge.

"On the carriageway travelling south-east this results in a break in white lines of about 50m and no other warning."

Ken asked the council if improved signage is to be installed and why "removing a section of cycle lane each side makes this island any safer?"

"If anything it is even less safe for cyclists as car drivers can use the excuse for close passes that there is no cycle lane at that point. I just wish one or more of the county highways officers were cyclists. They'd then understand the hazards cyclists continually experience," his correspondence to the council concluded.

Ken has received no "substantive response other than acknowledgement" after the first message, suggesting it is unlikely the council painted over the lane with the intention of adding signage communicating the Highway Code's advice for cyclists to ride in primary position when approaching such road narrowings.

Ride in the centre of your lane, to make yourself as clearly visible as possible at the approach to junctions or road narrowings where it would be unsafe for drivers to overtake you.

Undoubtedly many would argue cyclists using the route would be safer if the entire painted lane were removed and riders encouraged to ride away from the kerb, however the council's, likely 'easiest option', decision to simply erase the cycle lane for a short stretch has left local riders with questions about if their safety is being prioritised.