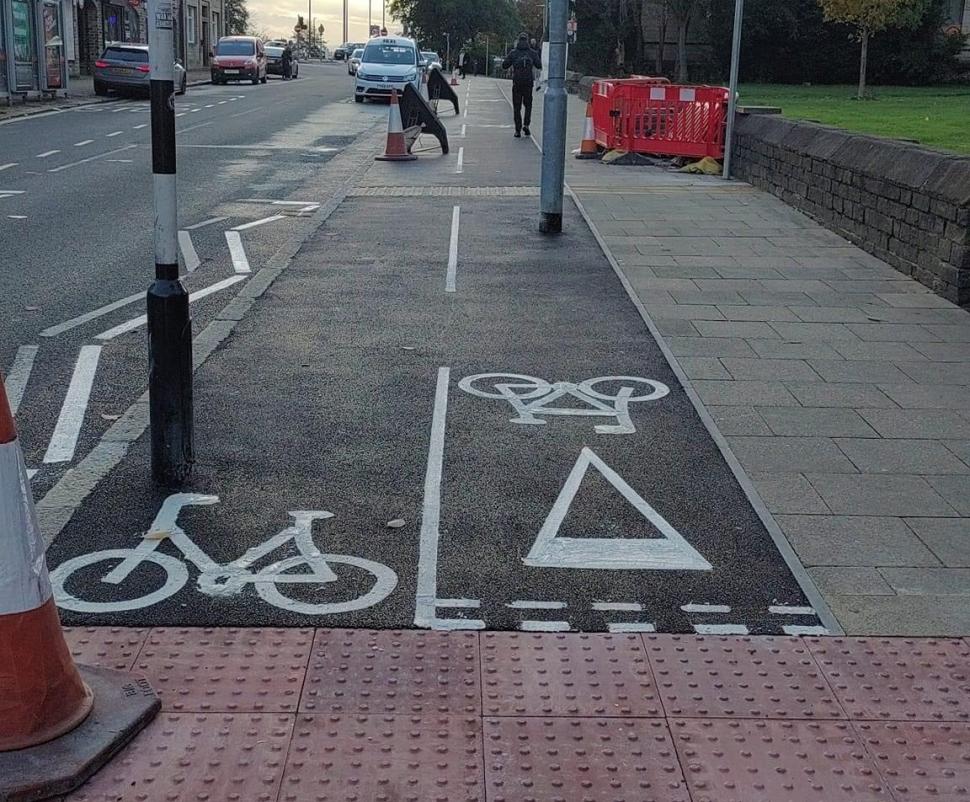 "There are good examples of cycling infrastructure around the country, sadly this isn’t one of them"...
by Dan Alexander

Residents have been left baffled by a new cycle lane that has opened in Halifax, West Yorkshire, and is just 30 metres long, abruptly starts at a pedestrian crossing and is blocked by a lamppost...

The far from innovative infrastructure can be found at King Cross as part of the A58 Corridor Improvement Programme to improve the route between the M62 at Ryburn to Halifax.

However, the lane's grand reveal has prompted ridicule online and bewilderment in the streets, with Calderdale Council, who worked with West Yorkshire Combined Authority’s West Yorkshire Plus Transport Fund on the scheme, admitting problems with design errors.

A council spokesperson told The Yorkshire Post "the cycleway is bi-directional as marked and is designed to national guidance" but did not address the impracticality of the 30m route which would take just seconds to cross, and may see riders wait longer to access the lane at the pedestrian crossing than actually ride across it.

"Unfortunately, errors and omissions on the design drawings which should have been corrected during construction mean there is currently a lamp column located in the cycle lane and the lane itself is marked up to the adjacent zebra crossing. We are currently working with our contractors to relocate the lamp column and remove the incorrect cycle lane markings," a spokesperson said.

"We're aware at the moment the cycleway looks somewhat disjointed, but as work progresses we're confident that this will link with other improvements to provide a positive contribution to travel in the area."

Liberal Democrat councillor James Baker expressed disappoinntment at the safety issues, namely the lamppost and abrupt end at a pedestrian crossing, saying: "There are good examples of cycling infrastructure around the country, sadly this isn't one of them."

"What's frustrating is many councillors will ask for improvements only to be told there is no money, then stuff like this goes ahead. It kind of makes a mockery that there is any real local democracy or say over what happens," he said.

Baker's Lib Dem colleague Cllr Paul Bellenger admitted "even as a councillor for Calderdale I shake my head at this and wonder 'whose idea it was and what their thought process was?'"

Writing to the Halifax Courier, a former Calderdale councillor who also claims to be a cyclist said: "We have got a new 30 metre, yes you read it right 30 metre, cycle lane in King Cross. You can imagine hundreds of people riding up and down this lane getting fit and shedding pounds.

"Seriously what a sad state of affairs for the people of Halifax."