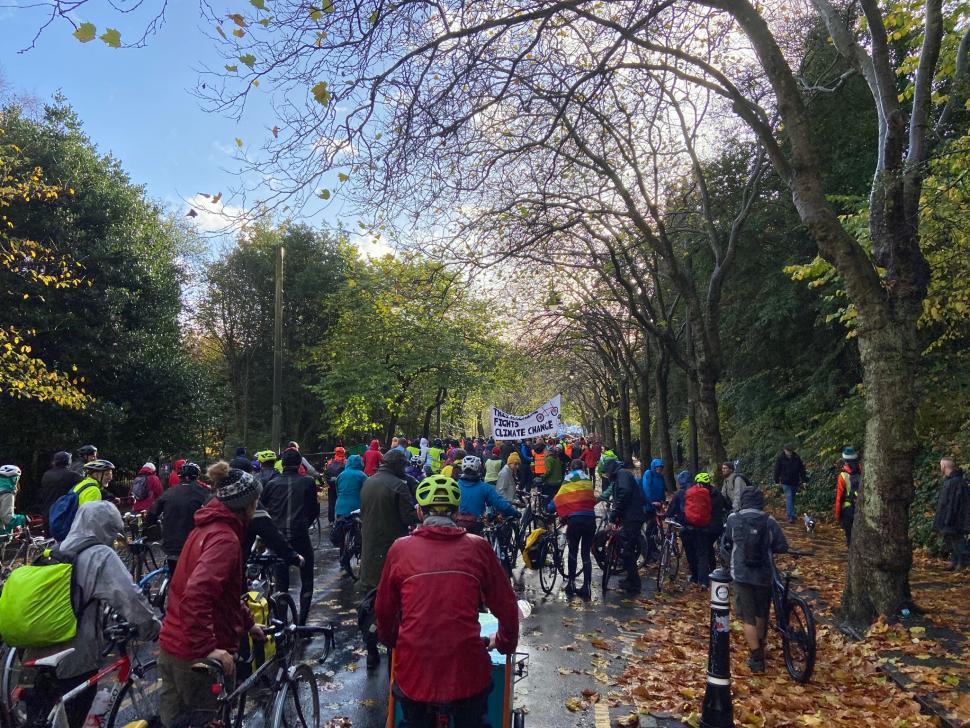 The COP26 summit in Glasgow has at the eleventh hour recognised the role cycling and walking can play in fighting global warming, with “active travel” now added to its electric vehicle declaration.

Encouraging people to get around by bike or on foot has been conspicuous in its absence from the summit, with active travel largely confined to the fringes despite the efforts of campaigners.

However, the COP26 declaration on accelerating the transition to 100% zero emission cars and vans has now been amended thanks to Matthew Baldwin, manager of the EU’s 100 Climate Neutral Cities project and EU coordinator for road safety and sustainable urban mobility, reports Carlton Reid on Forbes.com.

The declaration has been signed by more than 30 countries, including the UK, Ireland, Canada, Mexico, Denmark and the Netherlands, as well as automotive firms such as Ford, Jaguar-Land Rover and Mercedes.

It provides for the phasing out of diesel and petrol-engined cars by 2040, but the governments of countries including France, Germany and the US declined to sign it, as did motor manufacturers including Volkswagen.

It states: “As representatives of governments, businesses, and other organisations with an influence over the future of the automotive industry and road transport, we commit to rapidly accelerating the transition to zero emission vehicles to achieve the goals of the Paris Agreement.

“Together, we will work towards all sales of new cars and vans being zero emission globally by 2040, and by no later than 2035 in leading markets.”

The concluding paragraph has now been amended to include a reference to active travel, and says: “We recognise that alongside the shift to zero emission vehicles, a sustainable future for road transport will require wider system transformation, including support for active travel, public and shared transport, as well as addressing the full value chain impacts from vehicle production, use and disposal.”

Last Saturday, hundreds of cyclists from across Scotland took part in Pedal to COP feeder rides to Glasgow to join local riders and participate in the Global Day of Action for Climate Justice march.

> Pedal on COP – 1,000 cyclists ride to Glasgow to highlight how bikes can help save the planet

And earlier this week, more than 300 organisations – including the EU Cyclists Federation, campaign groups Bike Is Best and Cycling UK, the US advocacy organisation People on Bikes and the UCI – signed an open letter calling on governments to “commit to boosting cycling levels to reduce carbon emissions and reach global climate goals quickly and effectively.”

Over 60 organisations are calling upon governments to commit to significantly increase global cycling levels. We must shift focus away from electric vehicles to #MoreCycling 🚲 #COP26cycling

“Our world is on fire,” they wrote. “We must urgently leverage the solutions that cycling offers by radically scaling up its use. What we need now is for governments to politically and financially commit to more, safer and integrated cycling that is equitable for everyone living in our countries, cities and regions.”