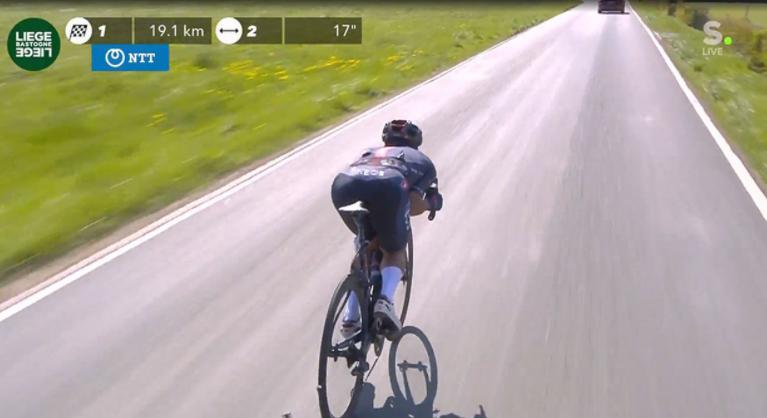 Richard Carapaz has become the most high-profile rider to be disqualified from a race under new UCI rules that ban the ‘supertuck’ riding position, after he used it in yesterday's Liege-Bastogne-Liege.

TV footage showed the Ineos Grenadiers rider descending in the banned position from the day’s penultimate climb, the Côte des Forges, after he had launched a blistering solo attack. To open up a 20-second gap on his rivals.

The position sees riders perch on the top tube while keeping low over the handlebars to try and get as much as an aerodynamic advantage as possible when riding downhill.

It was employed to devastating effect by Chris Froome during his Stage 8 victory at the 2016 Tour de France, his win at Bagneres-de-Luchon putting him into the yellow jersey.

Yesterday, Carapaz would be caught ahead of the Côte de la Roche-aux-Faucons, the last climb of the race, which was won by Tadej Pogacar of UAE Team Emirates.'

The 27-year-old was disqualified after finishing in 21st place, 1 minute 21 seconds behind the winner.

The Ecuadorian isn’t the first rider to have been sanctioned under the rules on riding position, which came into effect on 1 April and are aimed at improving rider safety.

The week before last, the Jumbo-Visma rider Gijs Leemreize was disqualified from Brabaantse Pijl for riding in a banned position.

The same week saw the British rider Alexander Richardson  of Alpecin-Fenix rider thrown out of the Tour of Turkey after he was shown on camera resting his forearms on top of the handlebars and holding his brake levers with just the little fingers of each hand.

Announcing last December that the UCI planned to ban the supertuck position, the governing body’s president David Lappartient said: “The measures announced today enable us to take an important step forward in the reinforcement of safety at road races, which has been one of the major priorities of the UCI for several years.

“All professional road cycling families have shared their concerns and proposed solutions, and it is on this basis that the announced measures were drawn up before being approved by the different competent bodies, including the Professional Cycling Council, which brings together representatives of teams, organisers and riders. Cycling now has a solid plan of action, which we will continue to improve in consultation with all concerned.”