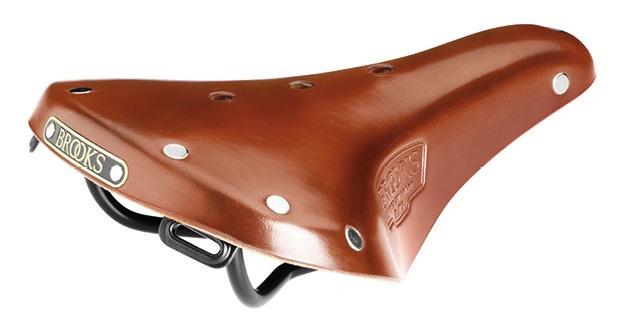 West Midlands company founded in 1866 makes saddles in UK, but sends them to Italian parent for dispatch to customers
by Simon_MacMichael

Brooks England, which has been making bicycle saddles at its factory in Smethwick, West Midlands for almost 140 years, has stopped sales to customers in the UK because of Brexit. The suspension of sales applies to order's made through the brand's website, with the company's UK distributor confirming on Monday that it does not affect products sold through premium dealers here.

In a shipping notice on its website, shared on Twitter yesterday by user @MCRCycleSam, the company, which dates back to 1866, said: “At Brooks England, we continue to produce each leather saddle in our West Midlands factory in more or less the same manner as we have for over 150 years.

“However, upon their completion, since some time these saddles are shipped first to our logistics centre in Italy and from there to Cyclists around the world.
“Due to this, the ongoing changes in the Brexit situation have made it necessary to temporarily suspend all new orders to the UK at this time.”

Brooks England said that orders received before 12.00 CET on 29 December would be processed as usual, adding: “Additionally, we will be extending our return window for purchases made prior to this announcement so as to allow for easy returns despite procedural delays. For information about returns or any other questions, please contact our Customer Service department who will be happy to assist you.
“We appreciate your patience while we analyse this situation and plan the proper administrative steps moving forward.”

Owned since 2002 by Italian bicycle saddles firm Selle Royale, Brooks England’s suspension of orders from UK customers highlights one of the impacts of Brexit on trade between the UK and the EU.

Until the end of the transition period at 11pm on New Year’s Eve, companies with operations in the UK and EU member states would have been able to freely move goods between their various locations – for example, sending products made at one site to another to be boxed up then mailed to customers.

Now, however, such goods would require clearance through customs, entailing additional time and paperwork as well additional costs such as VAT charges.

One would expect that Brooks England will change its procedures so that dispatch of products to UK customers is done directly from the West Midlands, thereby circumventing those barriers.

But the fact that the EU-UK Trade and Cooperation Agreement, which runs to 1,200 pages, was only signed on Christmas Eve has given businesses little time to assess the new rules and adapt their practices and systems to them.

The company’s announcement is the latest sign of the disruption that the end of the transition period is causing for UK shoppers within the bicycle market.

As we reported yesterday, Netherlands-based online bicycle parts retailer Dutch Bike Bits has announced that the UK has become the only country in the world to which it will not ship goods.

The company said that it had taken the decision due to the UK government telling overseas firms that they must apply and collect British taxes when selling to customers here, with the point at which VAT is collected, for example, moved from the point of importation to the point of sale.

As a result, online retailers – wherever they are located – are required to register for UK VAT and to account for the tax to HM Revenues & Customs, and to pay an annual fee.

Dutch Bike Bits said that the new regime, which it described as “ludicrous,” made it impossible to sell to consumers in the UK.

Last month, German bike manufacturer Canyon suspended shipments to customers in Great Britain and said it would stop accepting orders entirely from people in Northern Ireland due to uncertainty caused by Brexit.

It said it would resume deliveries after 11 January, once the situation becomes clearer.