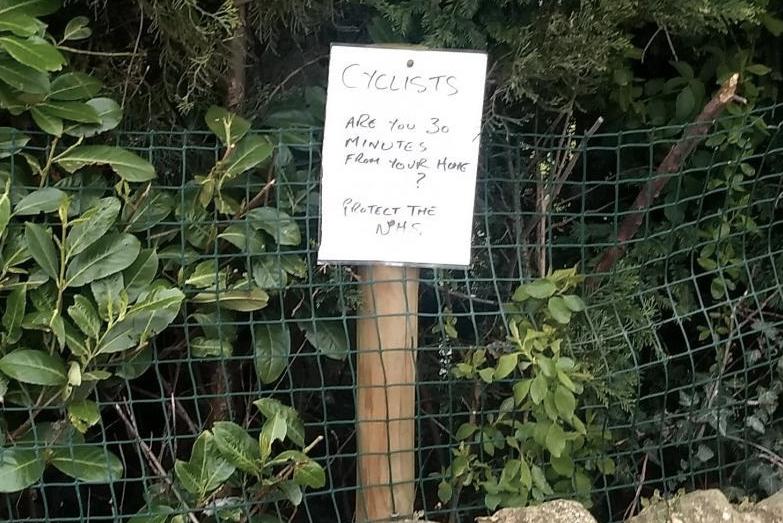 cyclists are you 30 minutes from home - roadcc comments section 14 april.PNG

British Cycling and Cycling UK have jointly appealed for an “end [to] hostility towards cyclists in an open letter written in the wake of a number of incidents during the past few weeks including signs being erected telling riders to stay away from villages, tacks being spread on the road and aggressive driving.

Signed by British Cycling’s chief executive, Julie Harrington, and Cycling UK’s interim chief executive, Pete Fitzboydon, reiterate that government guidance allows people to leave their homes for a bike ride as exercise, and that many cyclists on the road are key workers travelling to their work or delivering supplies.

They wrote: “The government’s guidance since the beginning of the lockdown has continued to encourage cycling for daily exercise, in recognition of the substantial physical and mental health benefits it provides to the many millions of people taking part. There is no trusted evidence to suggest that cyclists are any more likely to spread the disease than runners and walkers, if they follow the social distancing requirements.

“Far from being the villains in this story, we have been inundated with examples of clubs and groups who have gone above and beyond to support their communities during the crisis – whether that’s delivering prescriptions in Banbury, raising money for hospices in Crawley or helping to feed families in Inverness. It is deeply upsetting that these same cyclists are being met with such hostility in the process.”

Incidents we have reported upon here on road.cc in recent weeks include tacks being spread on a road regularly used by cyclists in Beckenham, south east London causing many to puncture, and signs in rural areas telling cyclists to stay away – often unofficial, but including some erected by one parish council in Cheshire which were subsequently taken down after our initial coverage of the issue.

At the same time, despite there being fewer vehicles on the roads, police forces across the country have noted an increase in speeding and other offences that put vulnerable road users in danger.

Both Cycling UK and British Cycling have issued guidance to their members, and to cyclists more widely, urging them to follow government regulations and associated guidance, and reinforcing that they should only ride alone or with household members, and not to undertake group rides with others.

The letter concluded: “While our organisations will continue to stress the need for responsible riding for as long as is required, we also ask the public to show tolerance, warmth and care towards the overwhelming majority who continue to do so.”

The letter’s message was also backed by Jonathan Ball, Professor of Molecular Virology at the University of Nottingham, who said: “Cycling is an excellent form of exercise and there is no compelling scientific evidence that cycling poses any more risk for transmission of the virus provided social distancing measures are sensibly applied.”

Cycling UK’s head of campaigns, Duncan Dollimore, said: “Throughout the Covid-19 crisis, government and public health advice throughout the UK has made it clear that, notwithstanding limitations imposed on movement, people need to get outside for physical activity. That’s why exercise outdoors was excluded from the restrictions, with cycling specifically recommended.

“Tragically, some people seem to have become obsessed with others’ exercise habits, including how long they’re cycling for and where. That’s led to careless language, including by some who are now concerned about threats of vigilante action against cyclists.

“Last month, Julia Mulligan, the Police and Crime Commissioner for North Yorkshire and chair of the National Rural Crime Network, told the BBC that cyclists were ‘a real worry’, saying that local communities were getting anxious about people riding through their villages – even though they had not done anything wrong.

“Having effectively legitimised those irrational concerns, she than had to warn vigilantes this week not to take the law into their own hands, without any appreciation that her previous comments had labelled cyclists as a problem.”

He added: “One way to help reduce the risk of threats against cyclists would be for people and the media to stop framing conversations about cyclists being a problem, and consider instead the benefits of riding a bike.”