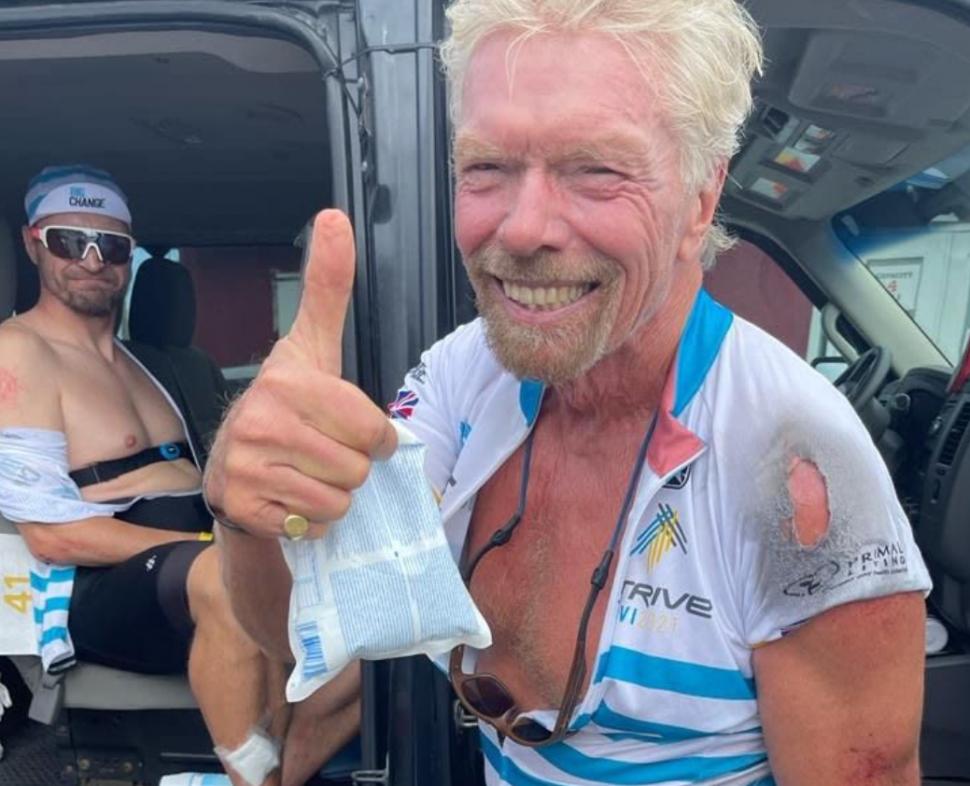 Sir Richard Branson has been treated in hospital after what he described was a “colossal” bike crash while taking part in an event in the British Virgin Islands.

Writing on his blog, the 71-year-old revealed that he thought the brakes on his bike had failed, and said that in his opinion there was “no question” his cycle helmet had saved his life.

The billionaire businessman and adventurer was taking part in the Strive BVI challenge, a fundraising event comprising several disciplines to raise funds for the educational charity Big Change, founded by his children.

On the second day of the challenge, Branson had completed the 60km ride on the island of Tortola when he decided to do an optional additional 15km.

“I was navigating a steep corner, with a massive cliff drop to my left, a car coming up the hill, and my fellow Striver, Felix Stellmaszek, in front of me passing the car,” he said.

“I pulled on both of my brakes, but they didn’t respond. I was going faster and faster, with my options being to drop off the cliff, hit the car, or potentially run into Felix.

“I gripped both brakes as tight as I could (later learning I should have tried taking one hand off the brake and then squeezing it again), but they didn’t work. I cried out to Felix a warning – ‘brakes not working!’ – but he had no chance of getting out of the way. We crashed – hard.

“We both fell off our bikes and our heads and bodies slammed into the concrete road,” Branson continued. “There is no question that wearing helmets saved our lives – not the first time that has been the case.

“We both lay flat out on the road as the rest of the team gathered around us. I stayed still, hoping I hadn’t broken my back or paralysed myself. Slowly, I moved my limbs and was relieved they responded. Thankfully, Felix was ok too,” he added.

Branson was taken to Virgin Gorda hospital to be treated for “some severe cuts and bruises on my elbow, an extraordinarily big bump on my hip and a massive hematoma on my leg.

“But it could have been so much worse,” he added.

It’s the second time that Branson has had a serious bike crash in the British Virgin Islands.

In 2016, he said, “my life flashed before me” when he crashed after hitting a speed bump during a training ride for that year’s edition of the Virgin Strive Challenge, with his bike “completely destroyed” after it was thrown over a cliff.

“I really thought I was going to die,” Branson continued. “I went flying head-first towards the concrete road, but fortunately my shoulder and cheek took the brunt of the impact, and I was wearing a helmet that saved my life (however, perhaps they should build bike helmets that protect the side of the face too - does anyone know of one?).

“My bike went flying off the cliff and disappeared. We’ve since recovered the crumpled bicycle, completely destroyed. My cheek has been badly damaged and my knee, chin, shoulder and body severely cut.

“As I landed, once I realised I was alive, I began testing my movement. I really couldn't believe I was alive, let alone not paralysed,” added Branson, who sustained a fractured cheek and torn ligaments in that crash.