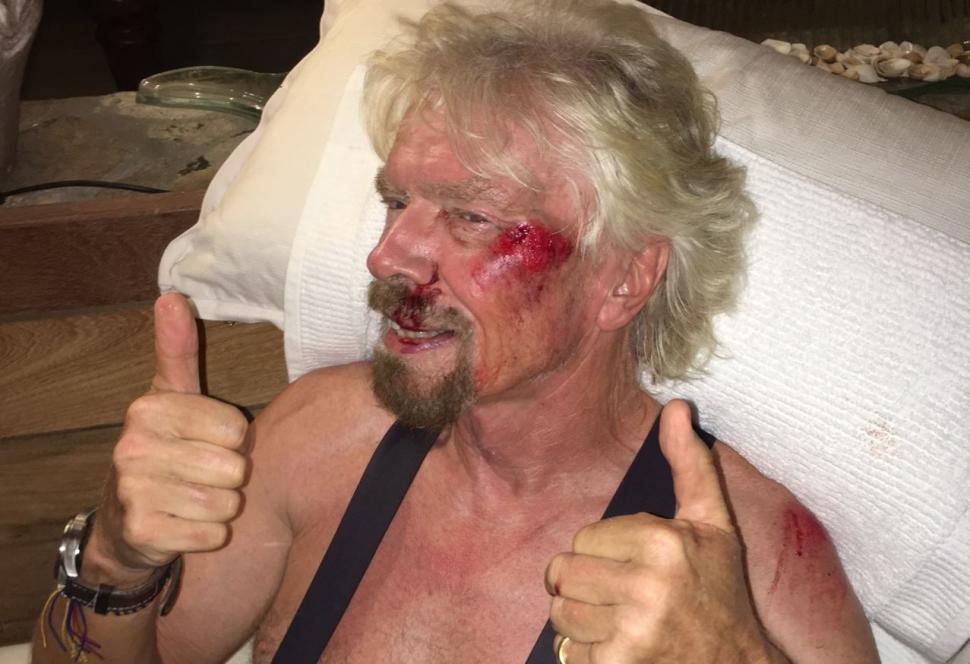 Sir Richard Branson has said "my life flashed before me" after a bike crash earlier this week while cycling in the British Virgin Islands - with his bike being "completely destroyed" after it was thrown over a cliff.

Writing on Virgin.com, the billionaire entrepreneur said: "A couple of nights ago I went cycling on Virgin Gorda with Holly and Sam [his children] as part of my training for the Virgin Strive Challenge," which will see the trio join a group aiming to raise £1.5 million for charity by running, cycling and swimming more than 2,000 kilometres from the Matterhorn to Mount Etna.

"I was heading down a hill towards Leverick Bay when it suddenly got really dark and I managed to hit a ‘sleeping policeman’ hump in the road head on. The next thing I knew, I was being hurled over the handlebars and my life was literally flashing before my eyes.

"I really thought I was going to die," Branson continued. "I went flying head-first towards the concrete road, but fortunately my shoulder and cheek took the brunt of the impact, and I was wearing a helmet that saved my life (however, perhaps they should build bike helmets that protect the side of the face too - does anyone know of one?).

"My bike went flying off the cliff and disappeared. We’ve since recovered the crumpled bicycle, completely destroyed. My cheek has been badly damaged and my knee, chin, shoulder and body severely cut.

"As I landed, once I realised I was alive, I began testing my movement. I really couldn't believe I was alive, let alone not paralysed. Coincidentally, the first person to arrive on the scene was my assistant Helen, who had just returned from holiday. She was wondering who was lying prostrate on the road. I was so glad to be alive that I quickly was able to summon my sense of humour, and said to her: 'I’m alive! At least you’ve still got a job!'

Branson said he went to Miami for x-rays, "but have been extremely fortunate that apart from a cracked cheek and some torn ligaments I hopefully will be able to complete the Virgin Strive Challenge next month.

"My biggest hardship is having to drink tea out of a straw. Oh, and being called elephant man by a six year old!"

He added: "My attitude has always been, if you fall flat on your face, at least you’re moving forward. All you have to do is get back up and try again. At least I’m practising what I preach – though a little too literally!"

The island where the crash happened is the third most populous of the British Virgin Islands and lies close to Necker Island, which Branson owns.

It's not Branson's first brush with death, others including his first-ever parachute jump in 1987 when he managed to unhook his own parachute and was saved in mid-air by his instructor, and several close call during his hot air balloon record attempts.

He noted that in a forthcoming documentary charting those exploits, his co-pilot Per Lindstrand, referring to Branson, repeated Napoleon Bonaparte's famous question when making new military appointments - “I know he's a good general, but is he lucky?”

1
"If you're a competent driver it shouldn't cause any issues": Cyclists react to Highway Code change outrage
2
Egan Bernal in intensive care following successful surgery on training crash injuries
3
Highway Code changes: Daily Mail publishes "error-strewn" Richard Littlejohn column attacking cyclists
4
Here's how to make a DIY VO2 max tester for use with Zwift and Strava for only £130
5
TV surgeon and cyclist killed after collision with motorist in Essex
6
Cyclist accused of punching delivery driver who “cut him up”
7
"Tired of road crime": CyclingMikey on episode 16 of the road.cc Podcast, plus how to make the most of your lunchbreak
8
Near Miss of the Day 701: Speeding bus driver “very lucky” to avoid prosecution for close pass (includes swearing)