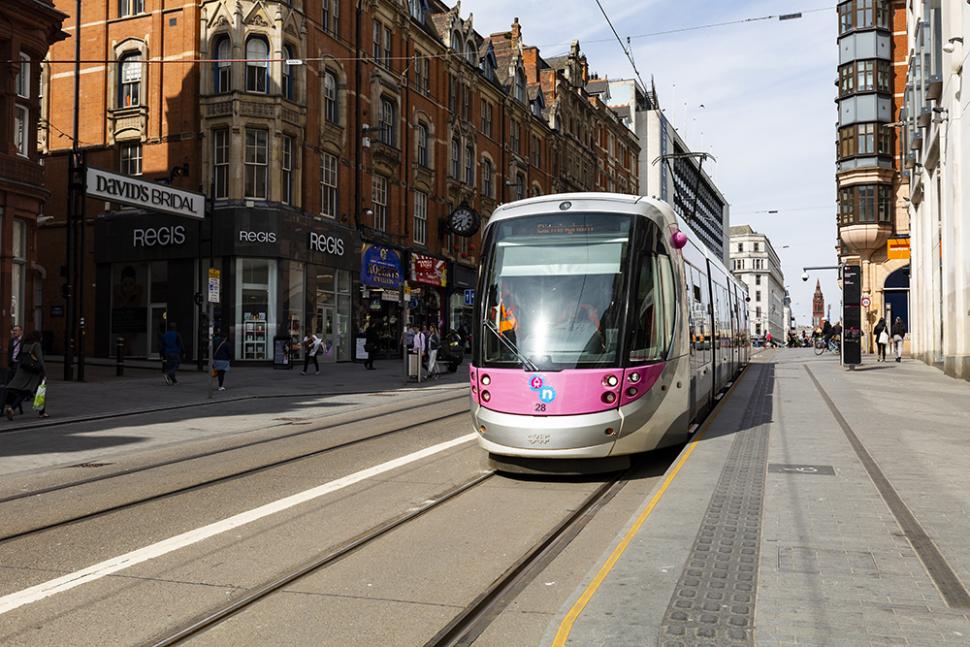 “Off yer bike!” – Birmingham cyclists told to dismount due to tramlines, or take diversion to avoid them

Cyclists in Birmingham will have to dismount when travelling through a main road in the city centre due to tramlines or else take a diversion – leading one local campaigner to describe the city as “way behind Manchester and London” when it comes to provision for people on bikes.

The expansion of the existing line 1 of the West Midlands Metro system will take it through Broad Street, the hub of the city’s nightlife – but Birmingham City Council says there is not enough space there to safely accommodate trams, pedestrians and bicycles, reports Birmingham Live.

The £83 million section of the tram route from Centenary Square to Five Ways is linked to redevelopment of the area, including pavements being widened to more safely accommodate cyclists.

The council insists that cyclists will have to dismount and walk through a section of Broad Street between Ryland Street and Sheepcote Street via Grosvenor Street West, more than doubling the riding distance between the two points and with a roundabout to be negotiated too.

But James Le Grys, who leads rides for CycleBirmingham – the social arm of local cycling campaign group Push Bikes – believes there is sufficient space on that section of Broad Street to accommodate a protected cycle lane.

“I really don't want to be negative because I'm not that kind of person, but Birmingham is way behind Manchester and London,” he told Birmingham Live.

“Manchester has a cycle network, we've got a line that is taking forever to build and will now have no provision for cyclists on Broad Street.

“Birmingham is so hit and miss. The council should have put a blue cycle route right down the middle of Broad Street so that everyone could understand what it was.

“Cyclists are not stupid, they would not ride in front of a tram,” he added.

A spokesperson for Birmingham City Council said: “We cannot provide segregated cycle tracks everywhere, and whilst we have widened the footways on Broad Street there are certain constraints in delivering the public transport improvements, that means it is impractical to fully accommodate cycling along the stretch.

“Notwithstanding the significant environmental enhancements made to the street-scene by the project and improved pedestrian facilities, there are limitations on where cycles, pedestrians and the requisite public transport infrastructure can be safely reconciled in shared use.”

Highlighting that “the tram stops prevent safe cycling between the rail and the kerb,” the spokesperson said that “the final scheme will necessarily prevent cycling between Sheepcote St and Berkley Street, and at the Five Ways underpass.

“Cyclists are still permitted to use the strip between the rail and the kerb along the rest of the track but should proceed with caution when crossing the rails, and consider dismounting to do so.

“For the tram stop near Ryland Street, an alternative route via Ryland St, Grosvenor Street west and Sheepcote Street is available to avoid passing the tram stop,” the spokesperson added.

Mick Stanford, a member of Cannon Hill Cycling Club, pointed out that tramlines can pose a hazard to cyclists, making segregated infrastructure essential.

“There should be provision for cyclists on a road like Broad Street because tramlines are dangerous,” he said.

“It's always the front wheels that get stuck in the rails, no question, and then over the handlebars you go.

“I would ride across tram tracks but would never dream of riding parallel to them, he continued, insisting that “The council should have segregated cyclists from the tram tracks.

“Cycling is now supposed to be part of the plans for roads, so this is shocking and it baffles me sometimes why there isn't more consultation,” he added.

Birmingham Live said it had appoached both the Midland Metro Alliance and Transport for West Midlands for a comment, but each said that the issue was one in whiuch the council is exclusively involved.

Last year, Birmingham City Council heralded an end to “the golden age of cars” as it published plans to ban drivers of private cars from crossing the centre of the UK’s second largest city by using  a Dutch-style approach aimed at encouraging more cycling, walking and use of public.

According to The Birmingham Transport Plan 2031, which aims for 5 per cent of trips to be made by bike by 2023 and double that to 10 per cent over the following decade: “Birmingham’s transport timeline shows a sequence of periods during which one mode of travel has been dominant only to be replaced by the next new best thing.

“Birmingham is now entering a new cycle of change which will be different because no single mode of transport will be dominant,” it added.

“Instead, members of the travelling public will have a choice between a range of modes of transport – each of them accessible, viable and sustainable – which together will form a go-anywhere, anytime integrated transport system.”

Although not if you’re travelling on a bike and want to continue through the length of Broad Street, it seems.