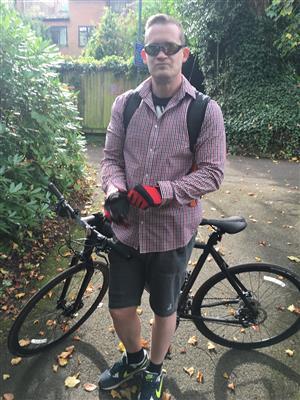 Adam Wright with his bike

Police officers in Bournemouth have returned a bike to a victim of theft – before he even knew it had been stolen.

The Cannondale bike, belonging to Adam Wright, had been taken from where it was locked to a bike stand at the Bournemouth University Talbot Campus, say Dorset Police.

At around 9.30am on the morning of 18 November, two police officers noticed a man acting suspiciously as he attempted to ride the bike away from the campus.

When they approached him, he tried to make off from the officers who managed to stop him nearby on Gillett Road.

Police traced Mr Wright due to his having logged his bike’s details with the Bike Register scheme and officers returned the bike to him,

He said: “I could not be more grateful to Dorset Police and the officers involved with the recovery of my stolen bike from my place of work.

“Without the diligence and the police officers’ instinct I doubt I would have seen my bike again, thankfully the bike was registered with the police and was returned to me before I had even realised it had been stolen.

”I use my bike every day to travel to and from work as well as for exercise so I would have been very upset if I had lost it.”

“Thanks to their swift response we were able to return the much-valued bike to the grateful owner,” he added.