Shimano have launched STEPS (Shimano Total Electric Power System), a dedicated e-bike groupset that they first showed back in 2010. The new groupset is an integated power and transmission solution that is everything you need, bar a frame and wheels, to build an e-bike. Shimano claims a 3.1kg weight for the drive unit, battery, chainset, cycle computer and chain, which makes it one of the lighter systems on the market. Reducing weight is a key design criteria with e-bikes, which has as much to do with increasing efficiency and range, as it does handling and performance. Maximum range is a claimed 120km when in eco mode, with normal mode offering 100km and high mode 80km. The motor tops out at 25km/h. The 11.6Ah Li-Ion battery battery has a 418Wh capacity and takes 4-hours to charge, and is good for 1,000 charge cycles, after that point is reached it still charges to 250Wh says Shimano. The battery can be mounted to the downtube or on a rear carrier. The handlebar mounted cycling computer provides feedback such as the selected mode, remaining juice in the battery, speed and distance. The modes can be easily selected from the three button controller that sits next to the handlebar grip.

The STEPS groupset will also integrate with a Di2 internal hub gear opening up interesting build options. Shimano reckons such a setup will “maintain shifting performance under high chain tension by reducing motor power while shifting”. Despite gaining little traction so far in the UK, e-bikes are booming across mainland Europe. The annual Eurobike show in Germany is always packed full e-bikes, where they really are big news. The reason e-bikes are such big news is that it is cycling as transport, for getting from home to work or college. There are several barriers they face though, the high price of most e-bikes is one, though prices are gradually coming down, and the other is packaging of the battery and motor into the bike. Here though manufacturers are producing ever smarter designs that look more like regular bikes and less like something out of a futuristic sci-fi movie. 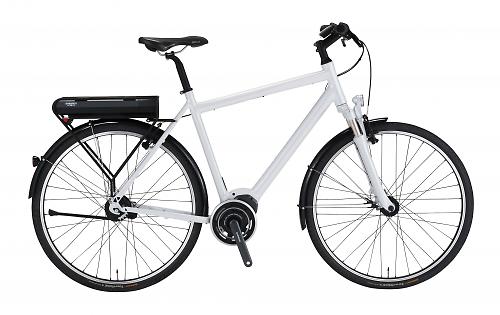 With big players like Bosch making a significant impact in the market, it’s clear Shimano doesn’t want to miss out on this growth and it surely hopes its new groupset will be adopted by the main manufacturers. More choice is undoubtedly a good thing and we should see some interesting new bikes this time next year. The new groupset is expected to appear on 2015 bikes as it won’t be available until August 2014.