Two recently filed patents for drag reducing clothing and an aero ducted helmet by UK Sport give us a glimpse at the latest technologies being pioneered for the British Cycling squad.

British Cycling and UK Cycle Sport are well known for pushing the boundaries of bicycle design and clothing, with its ‘Secret Squirrel Club’ instrumental in giving the athletes cutting-edge equipment such as the bespoke carbon fibre frames, aero handlebars and helmets and skinsuits that have played no small part in the haul of gold medals the Beijing and London Olympics. 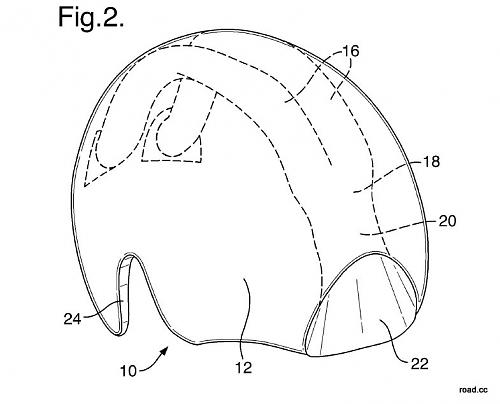 The helmet is a serious step forward from the helmets worn by the British Cycling athletes at London 2012. The design uses a pair of front inlets that channel air through internal ducts, and combine into a single rear outlet. This is intended to avoid the laminar flow from separating from the surface, because when that happens drag is increased. It’s similar technology to that being utilised by Boeing in the development of tiny holes in the tail of its new 777X aircraft to smooth airflow with the aim of improving fuel efficiency.

Along with the potential for improved aerodynamics, this helmet design leaves the athletes ears uncovered. The helmet is listed as being invented jointly by Mark Teaucher, Director at Bristol-based Crux Product Design, Alex Bertram and James Anthony.

The conventional approach to aero helmets, both for time trials and road helmets, is to streamline the helmet to smooth the airflow around the helmet. The rear outlet seems counterintuitive, but the patent makes it clear that this helmet is still in development and the mechanism by which drag is reduced isn’t yet fully understood. It does say that when a rider's torso is at a 30 degree angle relative to the ground, the “flow of air from the rear of the helmet significant improves the airflow patterns down the back of the rider, thus reducing drag.”

How far could this duct technology be taken? The last sentence in the patent sets out the possible direction the helmet could be taken, and is sure to have the UCI raising their eyebrows. “Optionally, an impeller may be included in duct 20 to assist the air flow through ducts 16 and 20. The impeller may be driven from an electric motor powered by a battery incorporated beneath the hard shell.” 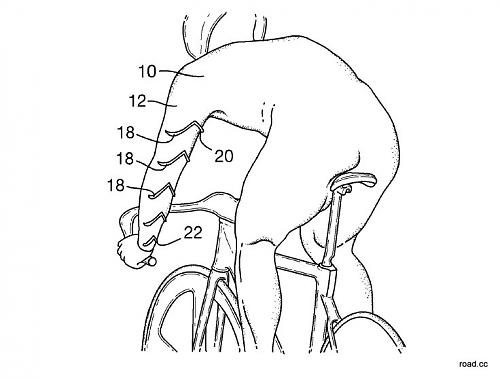 The second weapon in the British Cycling team's arsenal is drag reducing clothing. British Cycling was famously said to have burned the skinsuits it had developed after Beijing, and they caused more controversy recently with skinsuits worn in time trials on the road at the Tour de France by Bradley Wiggins last year, which looked to have aero arm wires to manage airflow.

The inventor of the drag reducing clothing, Robert William Lewis, has developed ‘kicks’, 3mm raised chevrons made from moulded plastic placed 50mm apart on the rear of the arms and legs, pointing upwards. 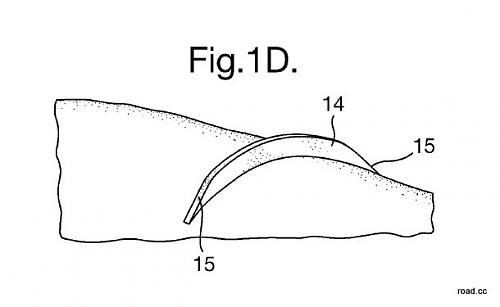 The patent claims that air flows up the arm and legs, which contributes to a large percentage of the overall drag (with the body about 80% of the drag you face as a cyclist) and by disrupting this airflow with raised dams the aerodynamic performance is improved.

According to the patent, “Overall best results were obtained with nine reversed chevron kicks having an angle of 90[deg.] between the arms of the chevron”. In their testing, they found that, “As air speed increases the drag saving on the arms with this invention also increases with ten chevrons each 3mm high from 1.33 Newtons total at 14m/s to a total of 2.94 Newtons at 20m/s. However, the greatest overall drag reduction occurred at 17m/s, with the total body drag saving declining somewhat with air speeds above that (but still significant).”

Those figures relate to the arms, but similar improvements were found on the legs, although the patent says the results were more variable as a result of the various positions the legs go through when pedalling. The arms offer a limited range of moment so it’s a more controlled area to work with compared to the legs.

Interesting stuff. But there’s no guarantee either of these two developments will ever see the light of day. The UCI will obviously want to have a very close look. While we can see the helmet most likely being sanctioned, it’s difficult to see the clothing being allowed. On clothing the UCI's rules states: "It is forbidden to wear items designed to influence the performances of a rider such as reducing air resistance or modifying the body of the rider (compression, stretching, support)."