Sir Chris Hoy yesterday became the most successful British Olympian of all time when he won the keirin in the velodrome. Hoy owes his success to his talent, incredible determination, dedication and desire to win, that much is clear - but having the right bike helps too.

Much has been talked about of British Cycling's now legendary attention to detail, "the aggregation of marginal gains" as Dave Brailsford likes to call it, that covers everything from training, preparation and equipment.

The UCI sets out very strict rules for the design of track bikes. That's why they nearly all look very similar. But look closer and you'll realise they're not all exactly the same. It's the job of designers and engineers to “butt up against the rules,” says Chris Boardman, who heads up a group known affectionately as the Secret Squirrel Club.

Boardman, who won a gold medal in 1992 aboard his futuristic Lotus track bike, was known for his obsessive attention to detail, leaving no stone unturned. If it could be measured, he would measure it.

Even within these tight constraints, there is still room for finding marginal gains. Under the scrutinising eye of Chris Boardman, British Cycling developed their own track bikes that have become the object of every competing nation's desire.

This programme really kicked in back in 2002. The research and development has been largely driven by ex-track racer  Dimitris Katsanis. He's become an expert in composites and his company, Metron Advanced Equipment Ltd based in Derbyshire, is the place where Chris Hoy's bike and equipment were developed. The frames are listed on the UCI's approved equipment list as Metron. 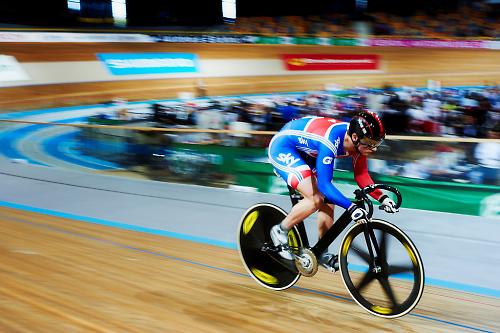 Marginal gains is about “finding 1,000 things and improving them all by a fraction of a per cent,” says Chris Boardman. When medals can be won and lost by fractions of a second, you begin to see why Team GB have become so obsessed with finding tiny improvements at every level. Even down to the nuts that hold the bike together. Put them all together and they make a difference: that's the aggregation of marginal gains.

This attention to detail has clearly paid off, with the bikes and equipment the envy of the world - and, of course, we're not for a second downplaying the role of the athlete. You could, if you want and had the money, buy a Team GB track bike for yourself. As part of the UCI's rules, all equipment used in the Olympics must be available to buy. A look at the website of UK Sport, the body that has funded the development of the bikes, reveals the frames are listed. There are no prices though, but we're making enquires as to the realistic likelihood of you or I being actually able to buy one.

Chris Hoy rode the Track frame at London 2012. The weight is in the region of 1.4kg and built up meets the UCI's 6.8kg minimum weight limit. It's easy to make bikes, especially track bikes with their lack of brakes and drive train, under that limit. This gives plenty of scope for making them unbelievably stiff, which they need to be when Chris Hoy is channelling anything up to 2,000 watts into the back wheel. Slotting into the skinny head tube is the Sprint fork. It uses a 1in steerer tube. At the speeds Hoy is hitting, in excess of 70kph, aerodynamics play a big part. And where aerodynamics are concerned, narrower for a smaller frontal area is king. According to UK Sport the length and rake of the fork are specific to each athlete. Interestingly, the fork used at the Olympics differs from the one we have photos of on this page. The fork blades  are more widely spaced creating a large space between the fork and the wheel. It's a move we presume is to benefit the aerodynamics of the bike as a whole.

The Sprint Bars are perhaps the most extraordinary looking component. An integrated design, the stem and bars are made from one-piece of carbon fibre, the length of the stem and width of the bars tailored to each athlete. As with the frame, they're not only designed to be stiff, but super aero, too. 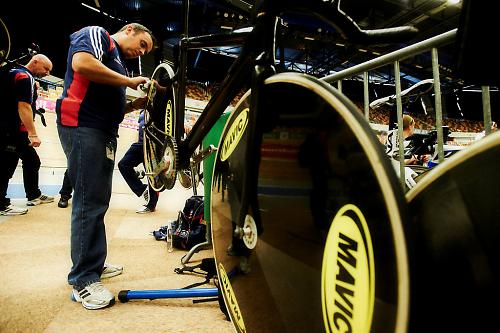 Wheels are Mavic - not to be confused with 'magic', as has been accused by some. We have no evidence to suggest they're anything but the readily available Comete Track disc and iO five-spoke wheels available from the French wheel manufacturer. Unlike the pursuit riders who use a disc on the front, Chris uses the five-spoke wheel as it's stiffer and better suited to the sudden and violent changes of direction common in the keirin.

The cranks used are UK Sport's own carbon fibre Track chainset. It's said to offer twice the stiffness of a Shimano Dura-Ace crank yet is 200g lighter. Other Team GB riders will use an SRM Training System Edition Track chainset, which not only allows easy measurement of power output but is designed to be incredibly stiff.

The helmet, a compact aero helmet with a stubby tail and incorporated visor, is listed on the UK Sport website as the Sprint helmet. However in the keirin it appears that Hoy uses the Aero helmet.