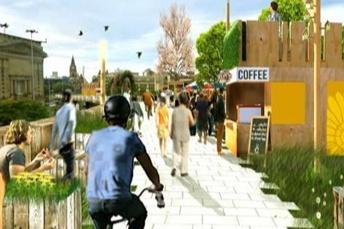 Bike-friendly "promenade in the sky" proposed for Liverpool flyover

Campaigners are fighting to save a pair of flyovers in the centre of Liverpool – and replace them with a “promenade in the sky” similar to ones in New York City and Paris – although unlike those, cycling would be allowed.

Mark Bennett of Michael Cunningham Architects has teamed up with the design agency studioF, whose Kate Stewart also set up retail business made-here have teamed up for plans to transform the flyovers into a pedestrian and cycle-friendly public space. According to the conceptual project’s page on the studioF website:

With the addition of planting, kiosks, cafes, lighting and power infrastructure, this route of hustle, bustle and speed is transformed into a thriving oasis and green lung in the centre of the city, an iconic attraction for residents and visitors.

As visitors meander along the park, they will come across cafes, raised beds with planting and allotments tended by the local community including residents and education establishments, independent retail kiosks and market stalls. Pedestrian routes, coupled with trim-trail equipment, offer a welcome space for residents and city workers to run and keep fit.

Just imagine yourself in this elevated park, having visited a farmers’ market, accessing the wifi cloud and being served with freshly-made coffee and toast, with a generous serving of honey produced by bees from hives within the park! All of this would come with a wonderful vista across the city! 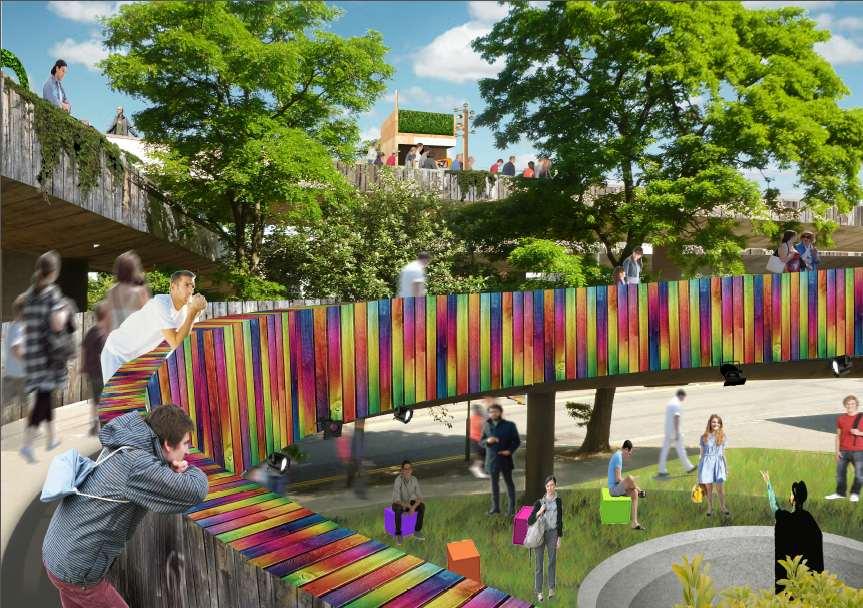 The proposals also include a 'theatre in the round' and the firm adds: “The Flyover has the potential to become a thriving promenade and meeting space within an important part of the city centre which is central to the vision.”

Elevated transport infrastructure no longer used for its original purpose has already been transformed into public space in cities including New York and Paris.

The High Line on the west side of Manhattan is a former elevated railway line that has been converted into a public park, with the first section opening in 2009.

It was itself inspired by the Promenade Plantée in Paris, which runs east from near Place de la Bastille and is located on a disused railway viaduct, with arts and crafts shops and studios occupying the arches beneath.

Bicycles are banned from both The High Line and the Promenade Plantée, though each has cycle parking as well as docking stations for their cities’ respective cycle share schemes nearby.