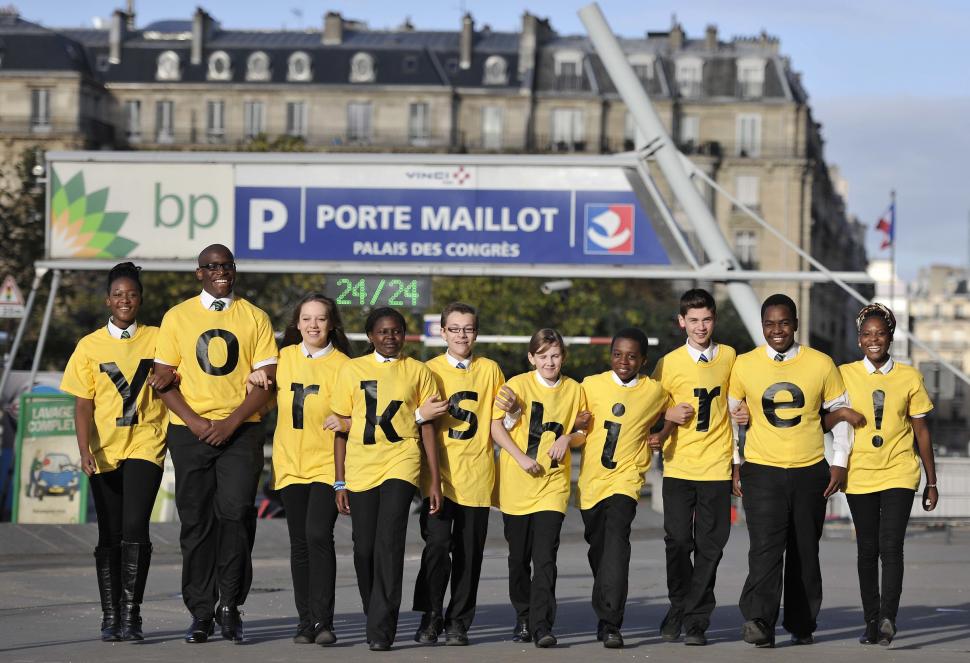 Whether encouraging kids to take to two wheels or making a multimillion pound investment in improving infrastructure for commuters, “legacy” is a buzzword as Yorkshire prepares to host the Grand Départ of the 101st edition of the Tour de France in less than nine months’ time.

A fully segregated "cycle superhighway" from Leeds to Bradford is the flagship project and will account for a big part of the £29 million Cycle City Ambition grant (including match funding) awarded to Leeds earlier this year, but a host of other initiatives are also under way.

At the presentation of the route of the 2014 race in Paris last Wednesday, we spoke to some of those who had travelled to the French capital about their impressions of the Tour, their anticipation as the countdown continues, and their hopes for what hosting the event would leave behind.

Among those at the Palais des Congrès to watch the parcours of the race get unveiled was the leader of Leeds City Council, Keith Wakefield, who told road.cc that the commitment to providing a legacy was “precisely how we got the Grand Départ." 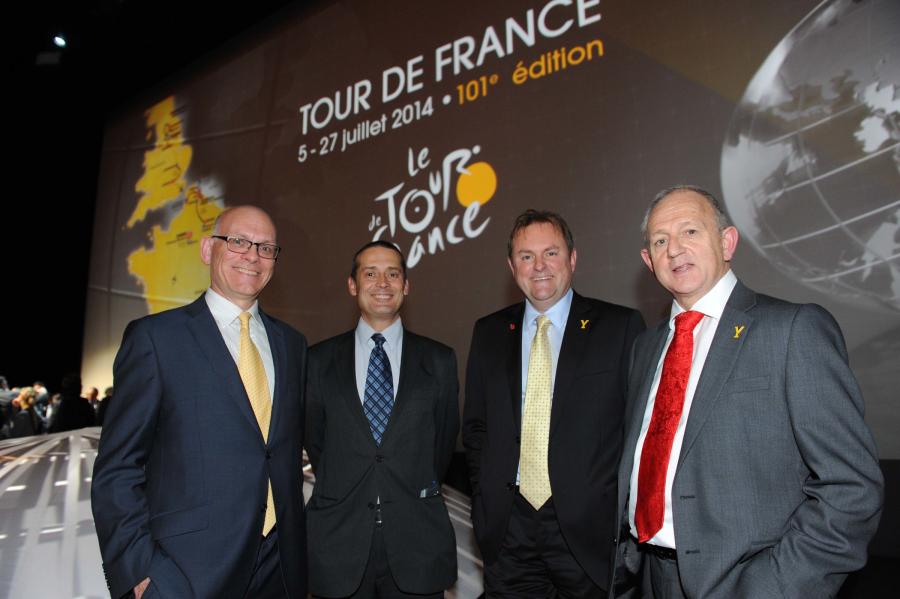 He said: “We’re very passionate and committed to ensuring this isn’t just a sporting event – the world’s biggest annual sporting event – but actually trying to make sure we leave a legacy for our schoolchildren.

“We’ve had visits from [five-time Tour winner] Bernard Hinault to our schools, we’ve had [race director] Christian Prudhomme come round to our schools, Roger [Harrington, Leeds City Council's cycling champion] is leading the co-ordination between young children and cycling.

“That for us is as important as the event itself, so in 10 or 20 years’ time we’ll see our future generations being really involved like we are in cycling.”

Indicating fellow Leeds City Councillor Harrington, a member of CTC – Wakefield himself used to belong to the national cyclists’ organisation – he continued: “Both of us are cyclists.

“We can’t actually qualify for being young any more," he joked, "but it’s really important that we leave something so the children can say, ‘I remember when the greatest sporting event took place in my city and I was involved’.”

Ten children will have more memories than most of Yorkshire hosting the Tour – students from specialist sports college Carr Manor Community School in Leeds, who joined stars of the sport such as Mark Cavendish and Chris Froome in Paris this week for the launch of the 2014 race. 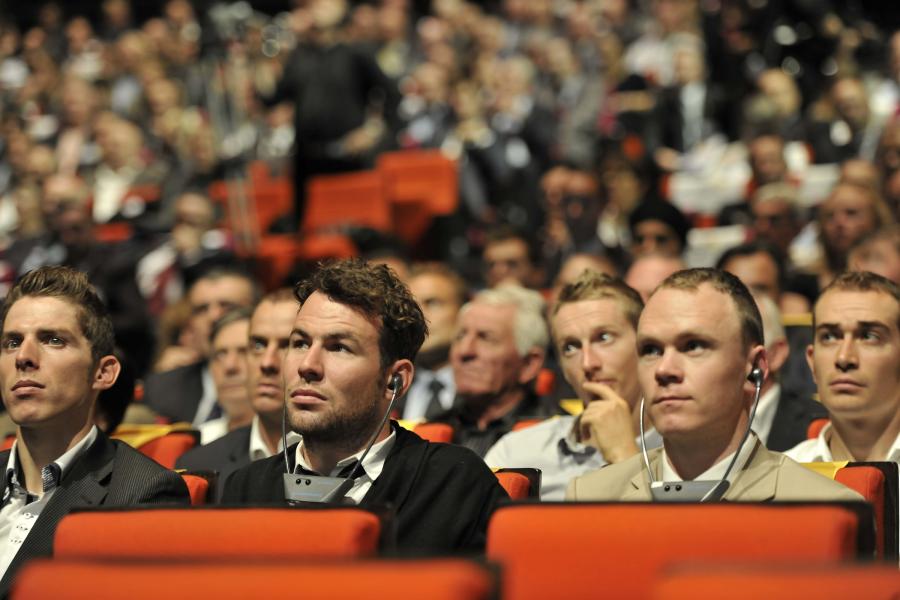 Five-time champion Hinault, who nowadays works on the Tour for owners ASO, visited the school earlier this year, and its operations manager, Harry Rayat told us: “We did a recce of what it [the route] would look like and from there onwards we’ve been selected to represent our community and our school, as well as Yorkshire, and to be part and parcel of the start of the Tour de France in 2014 – what an honour!”

The school’s selection to play a role in the build-up to the Grand Départ has led to greater enthusiasm about bikes among its students: “Children [at the school] are becoming increasingly more interested in cycling,” Mr Rayat explained.

“We have quite a cohort of children coming to school on bikes. This will now intensify all of that.

“We do promote cycling to school through various opportunities. We do residentials where they can do cycling, and we have an activity on a Friday, which is cycling on normal terrain and going off normal terrain as well.

“So we are promoting it and it will increase every single opportunity that arises.

“We have Bikeability and we also do bike maintenance at school.

“There’s a programme starting in November where children and even parents can come and do a bike maintenance course at school, get them involved, look after their own bikes, and progress from there onwards.”

Two Yorkshiremen encouraged into cycling early on in their lives – Rotherham-born brothers, Dean and Russ Downing, who ride respectively for Madison Genesis and NetApp Endura and have acted as bid ambassadors – were also in Paris, and they shared their thoughts with us on the impact of the Tour’s visit.

The brothers are involved in encourgaing youth cycling themselves through their Out of the Saddle Cycling Club, which has raised more than £30,000 for charity to date. This year's fundraiser takes place in Rotherham on 2 November.

Former Team Sky rider Russ said: “It’s going to be exciting times, I’m sure the kids will be there on Monday morning starting to do pictures of the Tour, it will all go yellow and it will be great for the kids to get involved, definitely.

“If it’s not on the bike it will be in the classroom, although lessons will turn French now for the next six months.”

Dean continued: “I went to Leeds one day in the summer and spoke quite in depth with Keith Wakefield. There were so many kids there, they’d got 100 kids, because it was the 100th Tour this year, all on bikes, outside the Town Hall. It was great to see and they were so excited to be there. 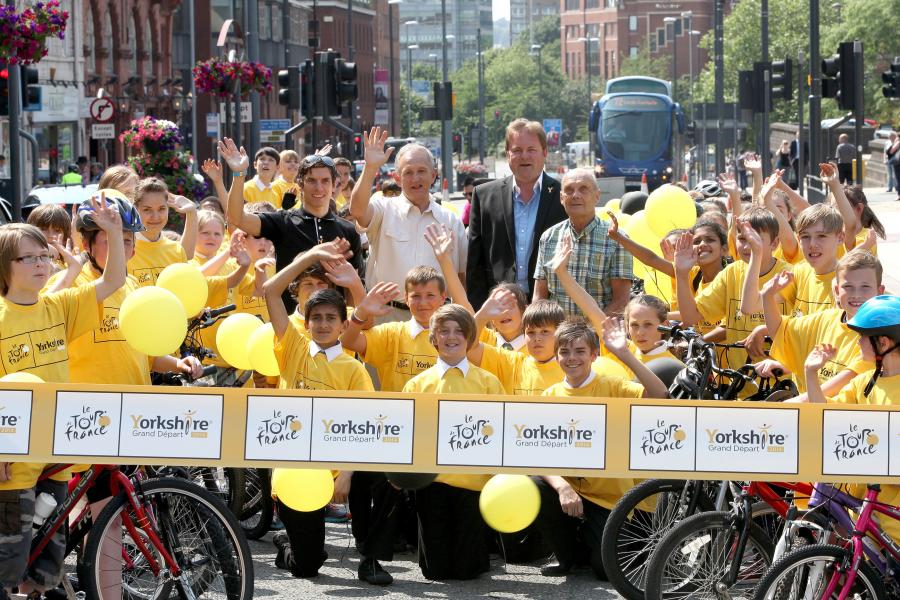 “And I think the kids that have come over from Yorkshire [to Paris], even yesterday they were a bit, ‘oh yeah, bike racing…’ and we spoke to their teacher again this morning and did a few photos.

“We asked the kids if they were excited and they said, ‘yeah, yeah, we didn’t realise how big it was!’ And I said to them, this is about as big as it gets in cycling, barring the actual event itself, this launch.

“They were all excited to be here. It’s a great time for us to be involved as well, we watched it as kids, at their age, watching it on bikes with our dad. Just to get invited here as ambassadors, we’re quite proud of that.”

In August, Leeds was awarded £18.1 million in Cycle City Ambition cash, with match funding taking the total to £29.2 million.

Among other things, the cash will be spent on secure cycle parking and upgrades to the Leeds Liverpool Canal Tow Path with the overall aim of trebling cycling levels in West Yorkshire to reach 12 per cent of all journeys in the relevant areas. The flagship project, however, is a 14-mile, fully segregated ‘cycle superhighway.’

Councillor Harrington, Leeds City Council’s cycling champion, explained to us: “The key reason people have for not cycling is they don’t feel safe. Here’s an opportunity like we’ll never have again in order to make people feel that the city is safe to cycle.”

Outlining other initiatives such as Sky Rides, he continued: “Within that we’ll have enough money also to make a place which is entirely free of traffic so people can cycle there, and there’s very active cycle campaigners who are very much involved in the design of the route.

“So there’s a lot of people pushing together to make sure we get the right design so people can feel that Leeds is a cycle-friendly city.

Councillor Wakefield added: “There’s a recent opinion survey done and 55 per cent of our citizens said they’d be willing to cycle to work – that’s a hell of a transformation from 20 years ago. It was never above 10 per cent.”

The conversation with the councillors, who are accompanied by Nicky Roche, chief executive of the company responsible for delivering the Grand Départ – she also advised the government ahead of last year’s Olympic Games – is taking place across the road from the Palais des Congrès.

Following a week in which a coroner’s inquest was told that a Barclays Cycle Superhighway in London was “just a piece of blue paint,” the fully kerbed, two way cycle path running down the middle of the road in Paris is striking. Councillor Harrington confirmed that the Leeds-Bradford path too would be fully segregated from motor vehicles, with Councillor Wakefield adding: “It’s the only way.”

The former added: “We won’t be able to do that everywhere but it’s a question of trying to do it in as many places as possible.”

Kids in awe of Tour's scale

Legacy plans aside, the arrival in Yorkshire of the Tour de France itself is a source of huge excitement.

We asked Carr Manor Community School’s Mr Rayat if, having seen the presentation, he and the children with him now realised just how big an event it is.

“It’s absolutely phenomenal,” he agreed. “The children are actually in awe with all of this going on. It’s fantastic, it really is.

“We travelled down yesterday and we hadn’t got the feel of everything but today as we came up to the auditorium, it’s absolutely massive.”

Dean Downing agreed that it was a huge day for Yorkshire. “It is very exciting,” he told us.

“Me and Russ have been involved since August 2012, just after the Olympics, when we got a phone call from [Welcome to Yorkshire chief executive] Gary Verity asking if we’d be interested in looking at the routes they were proposing to include in their bid.

“So we got involved with that, me and Russ rode the routes. Route 2’s not actually changed that much since then, just some little tweaks. Route 1’s changed quite a bit, running into Harrogate, so it is exciting to be here as ambassadors for the bid, now it’s actually happening.” 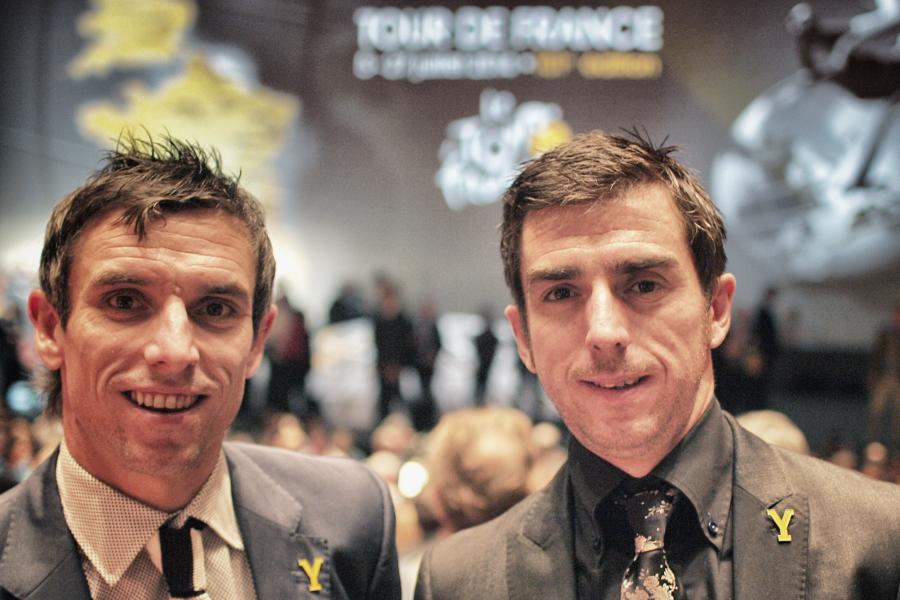 “Now it’s all official, this is just going to go crazy back home, Yorkshire’s a great county and really supportive in sport, obviously,” added Russ.

“I think they joked that in the table for the Olympics, 12 of the medals came from Yorkshire,” which would have placed the region 12th had it been a country participating in its own right.

Councillor Wakefield revealed that with Wednesday’s presentation, the countdown to the Grand Départ – Leeds also hosts the build-up to the race – had begun in earnest.

“It felt a bit real last year, but this is the final confirmation that it’s real and here’s the opportunity to showcase Yorkshire and get involved in a fantastic sporting event,” he commented.

“There’s a lot of activity going on well before then, from 100 days to go there will be cultural activities, everyone wants to be involved in the city, all across businesses, the voluntary sector, particularly the arts sector, they’re all interested in contributing to this best Grand Départ in the history of the Tour de France.

“I think it’s time the north and Yorkshire in particular were recognised, he went on. “It’s the home of great cyclists… we’ve had here today people like [Tour stage winners] Brian Robinson, Barry Hoban and others who’ve come along to contribute to our bid.

“So what better place than Yorkshire to showcase the talents as well as the scene?”