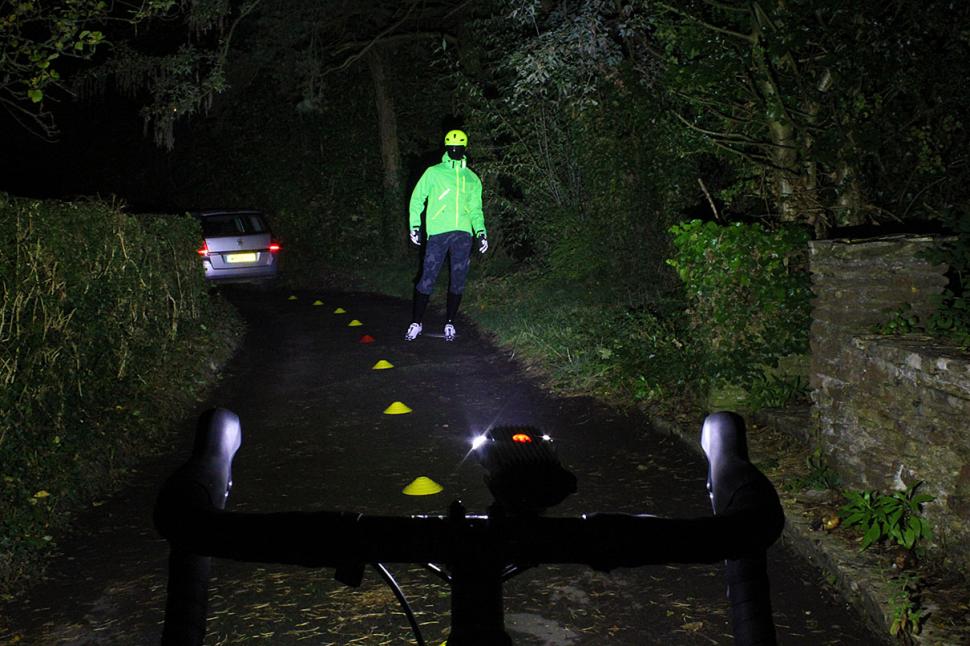 Another year, another big box of lights... rear lights feature for the first time this year too
by dave atkinson

Time for the clocks to go back, so time for us to go to a dark place and fumble about losing screws and tripping over soccer cones to bring you beam tests of this year's crop of lights - and this year's beam test is also available in a wide screen version for maximum beam comparing fun.

The full reviews will be going up through the winter. In the meantime, however, we thought we'd share our beam testing data with you. We took all the lights that came into the office before the Big Test deadline – about 60 of them, front and rear – and put them through their paces.

The great thing about lights is that testing isn't just subjective: you can measure the beam and take directly comparable photos of what it looks like. The results are available in the big road.cc light comparator at the bottom of the page. We've kept the data from last year, too, where we haven't been sent an updated version of a light.

What did you do?

We've collected lots of beam data so you can compare and contrast the different lights. Light manufacturers use a number of different metrics to describe light output. We've used lux here, but measured at a number of points across the width of the beam. That gives an indication of the brightness of the beam at the centre, the amount of peripheral light and the throw of the beam. We think that's the most useful measurement to directly compare. Specifically, we measured the lux value of the beam at two metres distance, in 10cm increments from the centre of the beam to 1m from the centre, giving eleven readings.

We've also included data on the shape of the beam. Putting the brightest part of the beam at the centre, we measured the output at thirty-degree increments around the beam, at a distance of 15cm from the centre. That gives you a good idea of the pattern of the beam. We used a smaller diameter this year for this reading because a lot of lights' beams don't really reach 50cm. So this data isn't directly comparable to the 2012 lights.

Disappointingly, nearly every light we've been sent so far this year has a round beam, more or less.  For riding on the road a squared-off beam has advantages. You're not wasting your battery lighting up the tree canopy, and you're less likely to dazzle oncoming traffic. Such beams are widely used in Europe, and in Germany they're the only lights legal for use on the road.

Here in the UK, however, we still seem to be stuck in a bit of an arms race, with manufacturers concentrating on increasing output, rather than tailoring lights for their intended use. Which is a shame. Maybe next year we'll see some of the manufacturers getting a bit more creative...

To get a good idea of what each beam looks like, we set up a bike on a rig so that we could photograph the beams of all the different lights in a comparable way. Last year we used a tunnel but this time we went outside, for a more realistic picture of what the beam looks like in a road setting. Each of the beam shots you can see above was taken using the same settings on the camera: 28mm (effective 45mm), shooting for 2s at f22 on ISO3200. If you fancy doing some of your own. So as much as they can be, they're directly comparable to one another. If one looks brighter than another, that's because it was. Melvin the mountain biker (thanks to Avon Valley Cyclery for the loan) is at 10m (the cones are 2m apart) and the car is 20m away.

This year we beam tested and shot the rear lghts too. The beam data follows the same format as the front lights, for the beam shots we picked the brightest flashing mode the light had, and shot the video at 1/60s, f4, ISO6400. The car is at 10m, Melvin at 5m.

There's more that you need to know about a rear light than just how bright it is from the rear: side visibility is more important than with a front light. So make sure you read the full reviews for more info on how the lights performed in the real world.

Is that it, then?

No, of course not. You can look through out Buyer's Guide for more information on what kind of lights will suit your riding. A super-bright beam isn't much use if the light ends up in a hedge after the first pothole, or fizzles out when it starts raining. We'll be subjecting all the lights to the rigours of the road.cc testing process and when we're happy that we've thrashed them they'll each get a full review. We'll include the comparison tool in each review too. In the meantime, we thought you'd like to see how they fared.

Firstly, light beams follow an inverse square law regarding the strength of the light at increasing distance, because they're illuminating a two-dimensional plane. So at twice the distance, the light beam is spread over four times the area. Consequently, a light that is measured as twice as bright at its centre won't let you see twice as far. The logarithmic scale produces a more realistic comparison because of this.

The comparator is below. Have fun!