Charge Bikes have launched their 2014 range and we visited them yesterday (Charge HQ is one of very few hollowed-out volcanoes in the whole of Somerset) to check out the highlights.

The headline news is that Charge have simplified their bike range with everything now falling into one of three model categories: Plug road bikes, Grater urban bikes, and Cooker all-terrain bikes (call them ‘mountain bikes’ if you prefer, but Charge go with ‘all terrain’).

So, for example, the Juicer and Filter of previous years get incorporated into the Plug range, and Charge have reduced the total number of models from around 25 to 18. 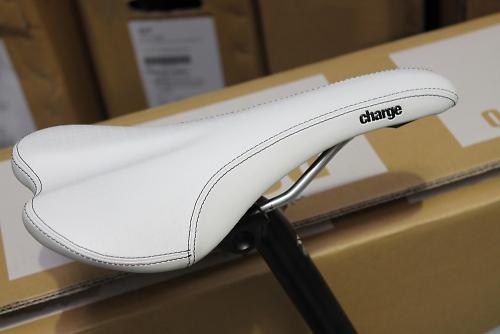 Within each category, the models are numbered, with the Plug 1 being a similar level of bike to the Grater 1 and the Cooker 1, and so on – so it’s all very stratified. They’ve even coloured coded the range. The 1 bikes are black, the 2s are white, 3s are red… you get the idea.

Why have Charge rearranged everything in this way? To make it simpler for everyone to understand the range, essentially, allowing the consumer to home in on the most suitable bike for them. Well, that’s what Charge told us, anyway. We suspect the decision was partly down to the fact that they’ve been running out of kitchen-based names for new models. You can’t call a new bike the Waste Disposal Unit. Actually, you probably could.

Charge will probably add another entry-level layer next year – so the straight Plug, or the Plug 0. And they’ll add an eBike to the range too, although they’re not yet giving any more details on that. Oh, and one other piece of admin before we start: Charge are shifting to a two-year product cycle now, so the new line-up will get a refresh towards the end of 2015 (you could have worked that out for yourself, right?). If parts manufacturers alter their products in 2014, Charge will obviously have to reflect that, but the plan is for the bikes to remain pretty much unchanged for two years.

Anyway, enough of that. Show us the goods… So, in the Plug category – the road bikes, remember – we’ll show you the entry-level model, the middle and the top: the 1, 3 and 5.

The main picture (above) is the Plug 1, priced at £449.99. The cromo steel frame has more of a sloping top tube than previously. You still get a flip-flop hub, a half link chain and rear-facing dropouts, so you can run it as a fixie if you like, but Charge have found that most people want to use it as a singlespeed (with a freewheel, 42-tooth chainset with 16T sprocket). For that reason, rather than fitting low-end brakes, they’re now using better ProMax RC482 callipers. If you don’t want that Slice handlebar, the Plug 2 (£469.99) is very similar but with a drop bar – and different brake levers, obviously. The Plug 3 (£849.99), which was the Filter, has a Tange Infinity double-butted cromo frame and fork and now has a 135mm rather than 130mm rear hub spacing. It runs on strong, medium-deep section rims from Alex. Those are puncture-resistant Kenda Kwik Roller Tendril tyres on there, and you get a load of clearance for fitting wide tyres and/or mudguards. 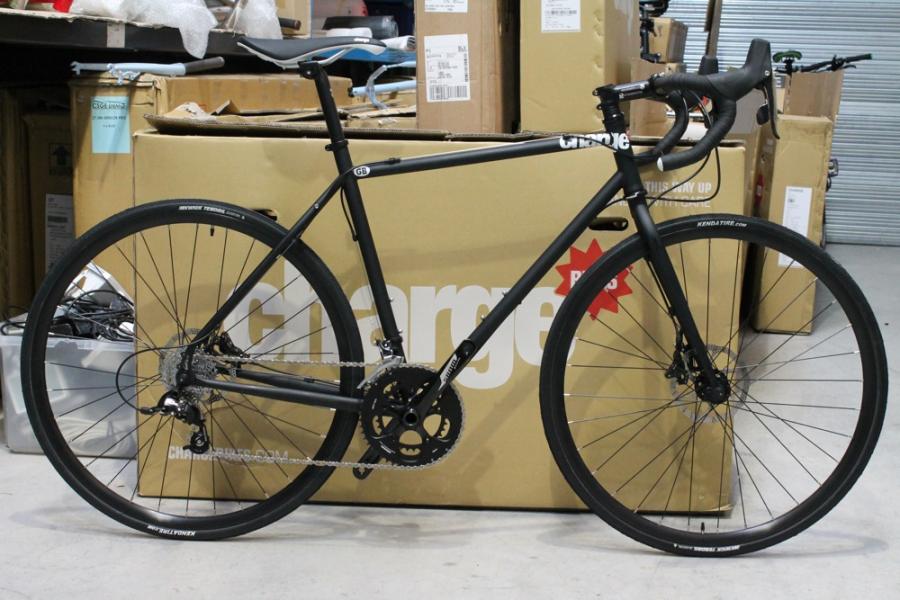 The top-of-the-line Plug 5 has a Tange Prestige cromoly frame, but the real talking point here is the use of SRAM’s new Hydro R hydraulic disc brakes that we’ve covered loads before, the idea being to provide reliable stopping power in all conditions. The mechs are SRAM Rival. You get a very good Charge Scoop saddle on the Plug 4 and 5 too. One final thing to note is that although now designated as road bikes, the Plug 3, 4, and 5 all retain the CX-style top tube cable routing of their predecessor models. 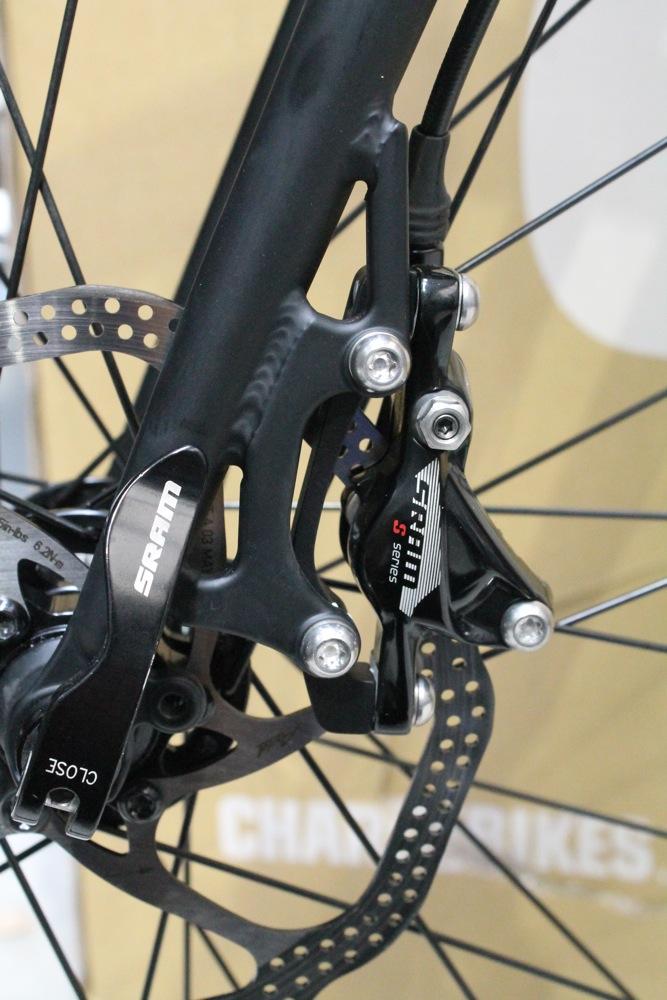 The aluminium Grater line-up comprises a Grater 1, 3 and 5 along with a Mixte versions of the 1 and 3. The Mixte options are officially unisex. 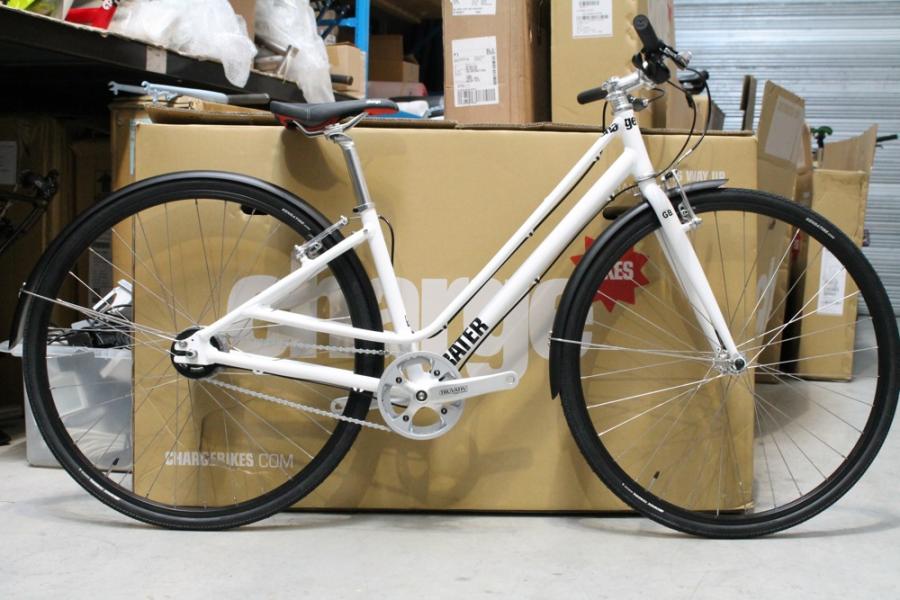 This is the 3 Mixte (£649.99) that’s built around an all-new frame that has the same geometry as the men’s frame, but in a step-through design. Charge have ditched the rattly metal mudguards of old and now fit plastic options instead. The 3 Mixte comes with a Shimano Nexus internal 8-speed gear system and an anti-rust chain and, again, puncture-resistant tyres. The Grater 3 (the men’s version rather than the Mixte version, £849.99) has a frame made from double-butted 6061 aluminium with an eccentric bottom bracket, and a lightweight aluminium fork. Rather than a Nexus hub gear, this one is upgraded to an 8-spd Alfine, and instead of V-brakes it comes with Shimano BR-M445 hydraulic discs. The grips are Charge’s lock-on Griddles and that’s a Charge Spoon saddle on there. Charge reckon they’re going to take on the world when it comes to grips and saddles, and they have work in progress there. They’ve got some new super-grippy bar tape too that we’re going to get in for review.

We won’t tell you about the Cooker mountain bikes – sorry, all-terrain bikes – because they don’t fall into the road.cc sphere. If you want to check them out, they’re up on www.chargebikes.com along with the rest of the 2014 range.