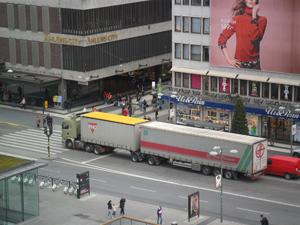 A current trial of longer HGVs should be restricted in urban centres on safety grounds, according to transport experts.

Both the Campaign for Better Transport and the Technical Advisers’ Group have appealed to Patrick McLoughlin, the Transport Secretary, for local authorities to designate specific routes that can be used by the new lorries, protecting vulnerable road users and protect road surfaces and properties on the routes.

The lorries, which can be up to 18.55m long, have also been found to damage street furniture and other parked vehicles on urban roads, due to a greater tail swing and more pronounced driver blind spots.

As well as proving dangerous for those around them, the lorries also force local authorities to spend more money on repairing the damage they cause.

As part of its initiative, the Campaign for Better Transport has released the following video, and it says:

This video demonstrates the very live threat of even longer (25 metre) HGVs coming from Europe as the legislation on HGV dimensions is currently being revised in Brussels.

The two different HGV lengths are linked however, because the UK Government has allowed these trials of 18.55m trucks, even though this configuration is not currenlty allowed permanently across the EU.

So because the UK Government wants these 18.55m trucks allowed permanently in the UK it risks opening up the whole debate about lengths of HGVs and thus allowing mega trucks of 25 metre mega trucks at the same time.

The UK Government buckled to road haulage industry pressure when it allowed these 18.55m HGVs so there is a real threat that it will not resist the lobbying from the big logistics operators next time.

The reality is that bigger trucks might save the industry money but society pays through more fatal collisions, more road congestion and more more pollution.

Philippa Edmunds, Campaign for Better Transport, commented: “The freight industry needs access to their depots on urban roads within towns and cities to be able to function efficiently, however many urban junctions would simply not be able to accommodate these vehicles, forcing them to mount kerbs, traffic islands or enter adjacent lanes when turning.

Martin Sachs, secretary of TAG National Transport Committee, said: “We are looking to work with the Department for Transport to find a way to minimise the impact of the introduction of longer trailers particularly off strategic roads.

"We need to ensure that there are no increased risks to the safety of other road users, and that roadside property and highway infrastructure are protected.

"We need to ensure the costs of these measures are borne by the industry, which will benefit from the introduction of longer trailers, as highway authorities have no slack in their budgets."

The letter to Mr McLoughlin reads:

Many urban roads in the UK are not about to accommodate such large vehicles, forcing them to perform movements that put other, more vulnerable road users at risk, such as:

As well as the risk to cyclists and pedestrians, lorries often damage parked cars, street furniture or buildings when travelling on unsuitable roads.

Government figures show that existing HGVs are four times more likely than cars to be involved in fatal collisions on local roads, but the Department for Transport has permitted a ten year trial of 17.60m and 18.55m (60ft) lorries, which started in January 2012. The current limit is 16.5m (54ft).

A demonstration of the new longer vehicle at the Department for Transport’s testing facility in Millbrook Bedfordshire showed the rear tail-swing when turning corners was significantly greater than normal HGVs, up to 1.3 m greater under normal road conditions, and would occur within the driver’s blind spot, posing a significant threat to other road users, especially cyclists and pedestrians.