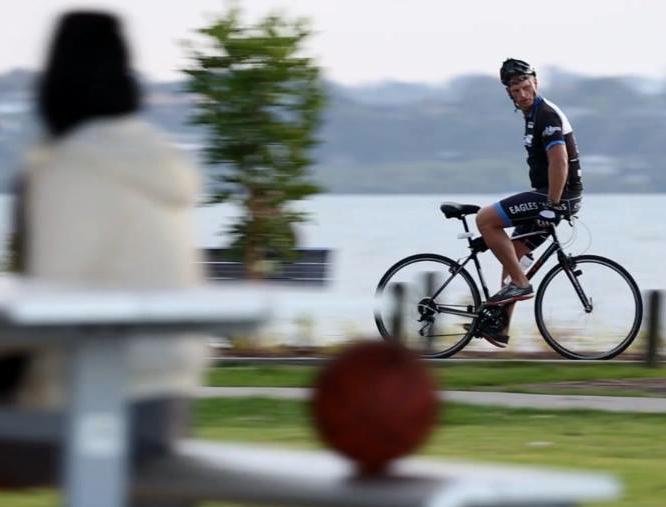 Andrew Hellinga has cycled backward further than anyone else over a 24-hour period, awaiting official ratification
by Elliot Johnston

Hellinga’s riding style, sat atop the handlebars and facing backwards, was efficient enough to allow him to break the original 24-hour record of 180km in a short 10 hours and 15 minutes.

Following a short break to take in his supporters’ congratulations, the Aussie continued his journey to achieve his target of 333km.

Going on to beat that target by 4km, Hellinga described how his body responded to 24 hours on the handlebars: “My bottom was screaming out “Ouch”! And my legs just groaned when I moved them.”

The soon-to-be Guiness World Record holder started the journey to this achievement many years ago; he told goldcoast.com.au: "I first started riding backwards when I was a teenager to impress the girls.”

It is yet to be confirmed whether the 46-year-old’s wife and mother of his children was wooed by the now famous backward riding technique, but she was there among other friends and family to support the record breaking endeavour.

Also supporting Hellinga in his challenge was his friend, and fellow cycling world record holder Reid Anderton, who broke the Guinness World Record for the fastest assisted ride around Australia, managing it in 37 days one hour and 18 minutes.

Anderton’s record was also achieved in association with the Challenge 4 Change charity that Hellinga was riding for. The charity focuses on addressing "issues of extreme poverty and its effect on children," particularly in Southern Africa.

The documentation, video footage and witness testimonies have been sent off to Guiness World Records Ltd. and confirmation of Hellinga’s record is expected to be received in six to eight weeks.

After battling against the elements for 24 hours, Hellinga announced in a wrap-up blog posted on the Challenge 4 Change website that his feelings following the event were of “relief, joy and a quiet sense of pride that I had completed something pretty cool.”

Hellinga’s decision to relive his youth and undertake the challenge of breaking this record centred around a desire to raise money for the Eagle Wings project which will help impoverished children in Zambia.

Describing the pain that he went through during the 24-hour ride, Hellinga wrote: “For 24 hours I suffered, my suffering has now stopped.

"The children in Zambia continue to suffer. The attention I’m getting from this event is nice, but my priority (passion) came from hopefully raising funds and awareness for the Eagle Wings.”

If you too wish to support the record-breaking Aussie, donations are still being accepted by Hellinga and Challenge 4 Change who hope to raise $10,000.