Pick up an updated G3 hub for £700, and a look at the bestselling and updated Fluid2 turbo trainer
by David Arthur @davearthur

A couple of new products from Saris and Powertap, as winter continues to make its presence felt and for some, thoughts turn to serious training or taking shelter in the garage on the turbo.

Powertap’s G3 hub has been significantly updated and is now available for just £700, down from £975. It’s available with Shimano or Campagnolo compatible freehubs and a choice of 20, 24, 28 and 32 spoke holes. Powertap has for many years been one of the most affordable and accessible power meters for those looking to inject a little science into their training. The company hasn’t rested on its laurels, giving the hub a major update. Essentially, they’ve repackaged the electronics so that they are now contained in the endcap, which reduces the necessary size of the hub shell and therefore the weight, which is less than previous versions, a claimed 325g. This also has the effect of making servicing much easier, and doesn’t require sending the whole hub back if any problems occur 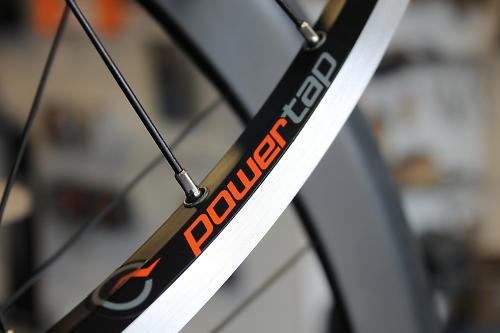 Critically, the G3 hub is now used throughout the range (the Pro has been dropped), and the lower price means you can pick up a wheelset, built with alloy clincher rims and including a front hub, for £900. Shimano and Campagnolo version are both available. That’s a £225 saving over the previous wheelset. The power meter market is starting to get a bit more lively, after years of the choice being mainly between a Powertap or SRM. The lower price of the Powertap G3 brings it inline with the recently launched Stages Power system, and is half the price of the much anticipated Vector pedal-based system from Garmin. You can read our review of the Garmin Vector here . The Powertap system is still an appealing one, being easy to swap between bicycles with no need to dive into the toolbox.

Turbo trainer season is nearly upon us. So Saris has updated its £285 Fluid2 trainer, which UK distributor Paligap tell us is one of the most popular trainers in the range. It still uses the same 2.75 lb flywheel which offers a very realistic road feel, but they’ve adjusted the fluid levels to offer better resistance. There’s a few other updates as well, including changing the position of the sealed cartridge bearings to make it even quieter. Ergonomics have been improved, with a new easier to use adjuster dial for pushing the roller onto the tyre. The rear feet are adjustable to level it out on uneven surfaces, and the bolt action lever that clamps the wheel into the frame has been redesigned to be easier to operate.