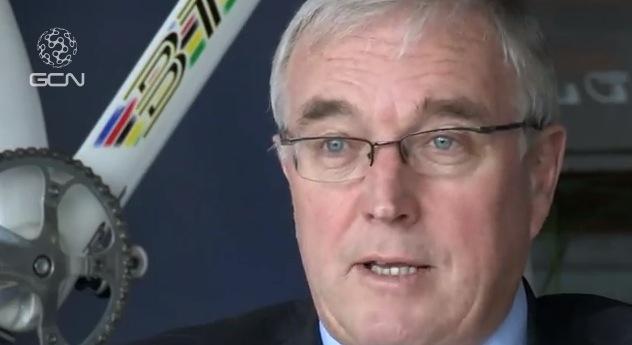 “Gangster politics” – that’s the phrase UCI president Pat McQuaid used in a letter to the heads of cycling’s national governing bodies to describe what he terms “a libellous ‘dossier’,” the summary of which was leaked yesterday evening, which details alleged corruption at the heart of the UCI during his presidency.

In his letter, the full text of which appears below, McQuaid, seeking a third term in office, accused his opponents of having “employed lies, bribery, attempted extortion, attempted vote-buying… and legal chicaneries to try to prevent you from even being given the chance to vote for or against me.

“This is not democracy. This is gangster politics.”

It’s a more expansive response to the one McQuaid gave last night when the website Velonews published the summary of the dossier, initially presented at the UCI Management Committee meeting in Bergen, Norway in June.

The dossier was reportedly compiled on behalf of two UCI Management Committee members, Mike Plant of USA Cycling, and Igor Makarov, president of the Russian Federation and the billionaire backer of the Katusha team.

Unlike the letter sent last week by McQuaid to the heads of the national federations that constitute the UCI, today’s was also sent to media organisations including road.cc, with the UCI president no doubt taking account of the fact that it would have been leaked to the press in any event.

Today’s missive calls on British Cycling president Brian Cookson – McQuaid’s sole opponent at the election, which takes place a fortnight on Friday at the UCI Congress in Florence – to “condemn these tactics utterly.”

McQuaid adding that if Cookson did not do so, “we can only assume that he supports them – and we will all have a graphic preview of how the UCI will be run for the coming four years under his leadership and with his henchmen.”

Cookson, who following that UCI Management Committee meeting in June described the contents of the dossier as “disturbing,” has already given his response to news of the leaked summary, however.

In a press release issued this morning, he said: “These allegations, which appear to be similar to those made to the UCI Management Committee in June, are clearly very serious. For the good of the UCI and cycling, they should be immediately and thoroughly investigated by the relevant authorities. I hope that this matter can be fully resolved before the UCI congress on 27 September.

“For my part, I remain totally committed to a democratic election under the Constitution of the UCI and will continue to talk and listen to national federations and voting delegates on how, together, we can grow cycling globally and restore faith and trust in our sport."

McQuaid’s letter to the heads of national federations represents the latest jockeying for position ahead of that crucial vote in Florence to determine who will run world cycling’s governing body for the next few years.

Already, the existing president’s candidacy is mired in controversy.

With his original nomination by Cycling Ireland rejected by its members in May, McQuaid then saw a second nomination from Swiss Cycling’s board withdrawn last month.

In late July, the UCI revealed that the Malaysian Federation and Asian Continental Confederation had proposed a change to the UCI Constitution – controversially, one that would be applied retroactively – that would allow a candidate to be nominated by any two national federations.

At the same time, it revealed that McQuaid had been nominated by the Thai and Moroccan federations, which would make his candidacy valid if that rule change were adopted in full.

It requires a two thirds majority of the 42 voting delegates at the UCI Congress to be passed, and the way the battle lines appear to be drawn at the moment, while the election itself, which takes place via secret ballot, appears to be too close to call, it’s likely that there is enough support for Cookson – or anti-McQuaid sentiment – for that to be blocked.

But McQuaid may not even need that rule change in order to stand for re-election; he insists that he is a member of both federations, and that he was nominated by each before the 29 June deadline, even though their backing of him was not made public until four weeks later.

A legal opinion secured by the UCI from law firm Baker & McKenzie insists that those nominations do comply with the UCI Constitution.

That has led to allegations from Cookson and others that he is trying to manipulate the election, and USA Cycling as well as the Russian cycling federation, among others, have asked the UCI to request the Court of Arbitration for Sport to rule on the issue.

The UCI refused to do so, but should McQuaid secure the majority vote of those 42 candidates in Florence and be re-elected for a third term, it is likely that the conduct of the election will be appealed to CAS by parties opposed to McQuaid – which is where Makarov’s billions could prove decisive.

TO THE PRESIDENTS OF ALL NATIONAL CYCLING FEDERATIONS

Yesterday evening, a libellous “dossier”, alleging corruption at the UCI, was anonymously leaked to the media. The media organisation presented the document to me. The claims in this so-called dossier are a complete fabrication. They are totally untrue and are not supported by a scintilla of evidence.

This is a scurrilous and libellous attack on my character, with a political agenda that is both nakedly transparent and totally contemptible – and unfortunately one that is completely in character with the tactics of my opponents.

Given that Mr Makarov and Mr Plant are the only two people to have this document, it is clear that this ”anonymous” leak can only have come from one of them. Both of them have trumpeted their support for Brian Cookson in this Presidential election. That is entirely their prerogative, but this sort of despicable behaviour is not.

So far in this presidential election campaign, my opponents have employed lies, bribery, attempted extortion, attempted vote-buying, attempts at entrapment with hidden cameras and microphones, commercial interests threatening to bankrupt national federations if they didn’t withdraw my nomination and legal chicaneries to try to prevent you from even being given the chance to vote for or against me. This is not democracy. This is gangster politics.

If Brian Cookson does not now condemn these tactics utterly, then we can only assume that he supports them – and we will all have a graphic preview of how the UCI will be run for the coming four years under his leadership and with his henchmen.

This behaviour on the part of three Management Committee members – as well as this libellous dossier – is doing untold damage to the reputation of the UCI, something that Brian Cookson has claimed he apparently wants to restore.

I am proud to stand before you as a candidate in this election. I am proud to present you with a clear choice of leadership for the coming four years. I will be prouder still if you choose me as your next President at Congress this month. But if you do not, I will accept your choice with good grace and I will leave Florence with my head held high. I will know that I have given my all to the UCI over the past eight years and that I have done everything possible to protect our democratic process.

I challenge Brian Cookson to say the same thing.