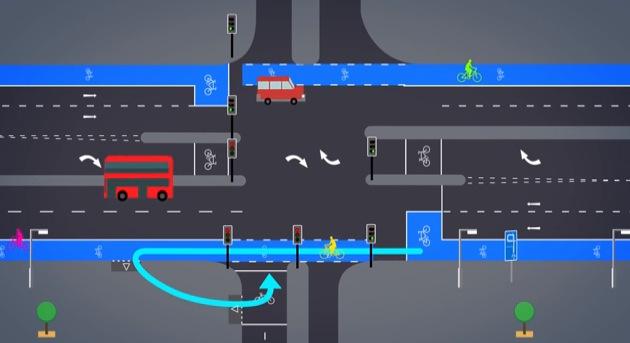 Transport for London (TfL) has produced three animated videos showcasing cycle safety features it is introducing along Barclays Cycle Superhighway 2, which originally ran from Aldgate to Bow but is now being extended further to Stratford.

Being animations, they are over-simplified - the bus stop videos, for instance, don't show what is likely to happen when you have someone rushing to catch their bus with a cyclist coming the other way who isn't looking properly, while the traffic moving off at the lights behind the cyclists who have benefited from that early start seem to moving much more sedately than would be the case in real life.

As for that two-stage right turn, while it does give cyclists priority, the looping manouevre they have to do first, which takes them past the junction before effectively doubling back, doesn't seem to reflect the way that people on bikes - or foot, for that matter - tend to move in reality, when the shortest course is typically the preferred one.

Look at lanscaped lawn areas in a 1970s council estate that require people on foot to take the long way round, and you'll see the tell-tale 'paths of desire' across the grass that show that generally, they want to tak the most direct route.

In this case, we imagine that even assuming cyclists are aware of the route to turn right set out for them by TfL's planners - something that is by no means guaranteed - many will simply look at executing a right turn as normal from the main carriageway, perhaps waiting until the lights to their left change to give cyclists approaching from across the junction priority.

Have a look at the videos, and let us know what you think in the comments below - are these a step forward for cycle safety and something that should be adopted beyond the capital, or could the designs, and the way they are likely to work in practice, be improved upon?