Some of the standout bikes from Eurobike
by David Arthur @davearthur

Eurobike 2013 has flung open its doors and we've had a quick sprint around the halls to bring you some of the highlights from Pinarello, Colnago, Specialized, Scott, Storck, Orbea and De Rosa. There's more black out there than at a Victorian funeral, and more fluoro highlights than Ibiza 87 - quite often on the same bike. As you'd expect there are plenty of disc brakes, new aero road bikes, and there are plenty of surprises too.

Most eye catching of the disc bikes we've seen so far are the much anticipated Orbea Avant and the Pinarello Dogma Disc, biggest no-show is the Specialized Tarmac SL4 disc, oh well maybe next year.

One anticipated star of the show might not be here but De Rosa have undoubtedly supplied another. 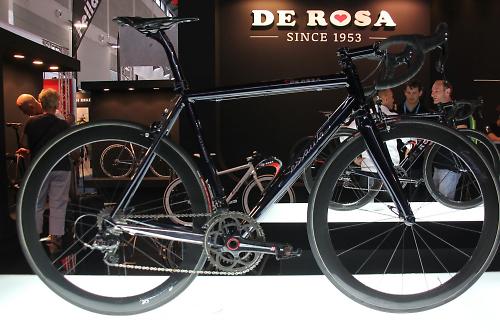 De Rosa always have something both beautiful and interesting to show, this year it's their Sessanta range of super top end bikes, created to mark the company's sixtieth anniversary.

There are four Sessanta bikes - 'sessanta' being Italian for 60, the brand was founded in 1953 - one in each of the main frame building materials, carbon, steel, titanium and aluminium. Now you might expect us to go all misty eyed about the steel or titanium versions or go on about the jaw dropping proportions of the Carbonio's down tube, but no - it was the Allumino that grabbed out attention. A super high end aluminium Italian road bike.

Details on this are sketchy at the mo, but we will be returning to the De Rosa stand to find out more and we'll update this when we do. Aluminium has been making a comeback in recent years as a performance material and a proper high end bike was the logical next step. Top marks to De Rosa for taking it.

None more black, Back to Black, Paint it Black, Back in Black
[That's enough 'black' music references - Ed] 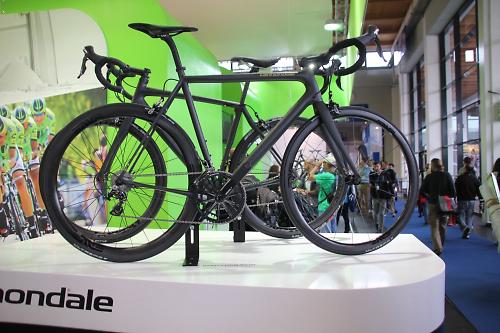 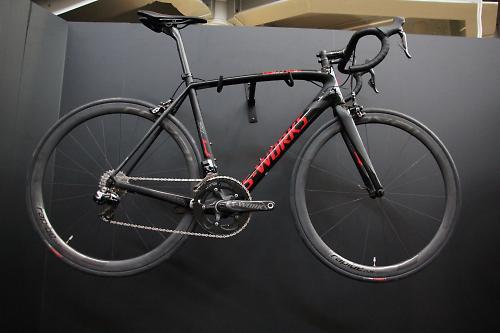 Black is the theme at this year's Eurobike, and if it isn't black it's fluoro, or black with fluoro. On a first day sprint round the halls the battle to be blackest comes down to a straight fight between Specialized with their wall (black, natch) full of black S-Works road bikes and the Cannondale SuperSix Evo Inc - that'll be black ink.

Black has long been the staple of Cannondale's urban range, now it's broken out. At a Eurobike long, long ago the road manager for a major brand musing on the subject of the importance of colour and the trickiness of getting it right said: "Of course for the British we just stick a few black bikes in the range." We're all British now. 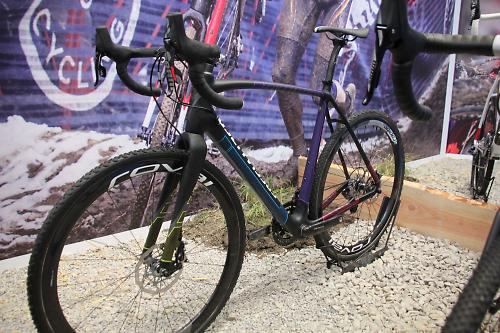 It wasn't all black on the Specialized stand, though. The latest version of their Crux cyclocross bike has a very striking colour scheme black, purple, and blue - oh, and more importantly it comes with SRAM's new Red hydraulic disc brakes.

Don't get too excited yet though UK cross fans. Rumour at Eurobike is that the Crux won't be coming to the UK, we''ll try and verify that though.

Away from black the latest Venge comes in a selection of colours that hark back to Specialized colour schemes of yore - lots of red and white. The full on blackness being kept for the S-Works bikes. Scott announced the return of their lightweight race machine, the Addict a few weeks back. No sooner was it announced than Orica Greenedge's Simon Gerrans was riding in to yellow on it at the Tour de France. Timing is everything.

According to Scott the top end Addict SL boasts a sub kilo frame and fork weight, and its less high modulus siblings don't come with much of a weight penalty either. Along with the light weight, the new Addict gets some  aero improvements courtesy of its Foil stablemate. 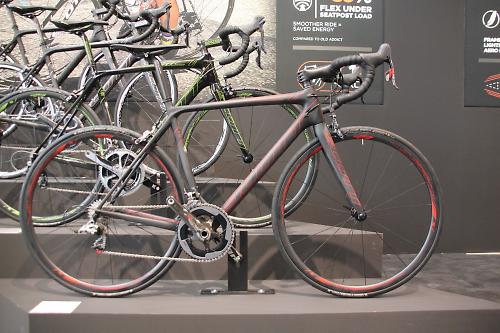 Scott are offering the stock bike in a number of builds. Top of the pile is the Addict SL with SRAM Red 22 group. There's also the Addict Team Issue which is the one Orica GreenEdge ride and which comes with a Shimano Dura Ace build; the Addict 10 with a different carbon lay-up and (confusingly) Shimano Ultegra 11-speed; and finally the Addict 20, which according to the Scott website differs from the 10 only in having Shimano WH RS11 wheels rather than Syncros RP 1.5s and Ultegra 10-speed. All of them come with their own combination of black and fluoro paint jobs. 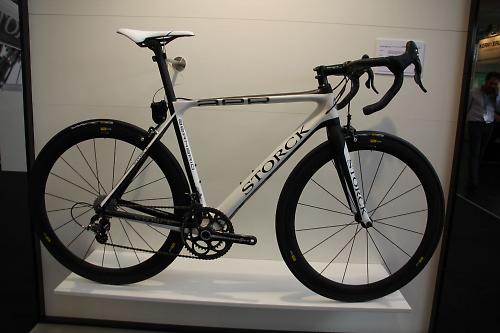 Storkc are showing a very striking aero road bike, the Aeranario, in two flavours the G1 and the Platinum. Like the Lightweight Urgestalt we've already featured there's a lot of squared-off tube profiling going on there and also a very minimalist seat clamp with an under top tube clamping mechanism. 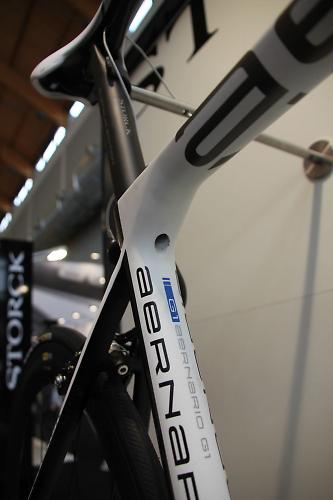 It may be aero optimised, but it certainly isn't heavy, Storck are claiming a frame weight of 890g which built up to a feathery 5.4kg for the complete G1 version on show. Interestingly the Platinium version boasts an even lighter claimed frame weight - a mere 790g but built up in to a heavier (the term is relative here) bike at 5.9kg. 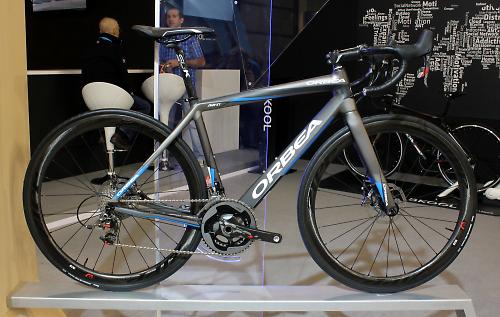 We first heard about Orbea's new Avant, which they describe as the 'the most adaptable bike ever seen', back in June, and today we had a first look at one in the carbon. The frame sports disc brakes with the SRAM Red 22 hydraulic hoses very neatly routed internally. 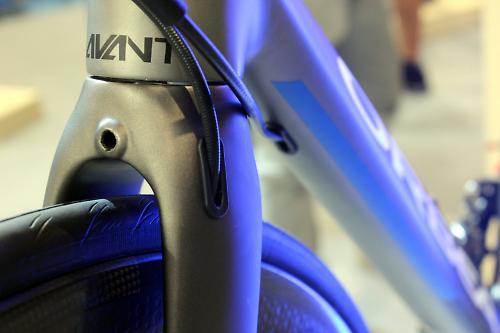 The fork is new and flares towards the dropout, and there's similar flaring at the rear axle. There's space for 28mm tyres, and there are mounts for mudguards and rack. Looks very nice, this is one bike the roadcc team is keen to ride. Here is the latest Orbea Orca, the bike we first saw the day before the Tour de France. The Orca has been with us for ten years, but changed much in that time, and has changed further for 2014. The frame is lighter and more aero, with a dramatically low profile front end and skinny fork. 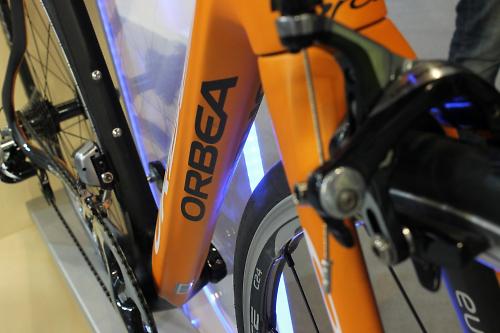 It's a shame we won't be seeing the Euskaltel-Euskad in the pro peloton next year, 'cos their signature orange is an awfully nice colour and looks great on the latest Orbea Orca. 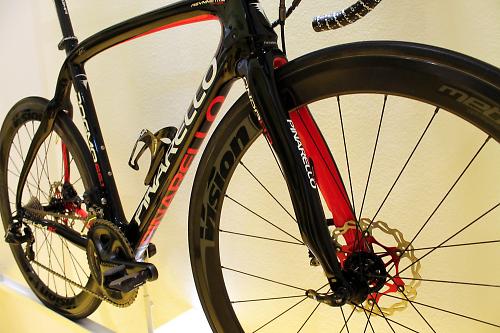 This is the new Pinarello DogmaK Hydro Disc. On looks alone the bike looks almost identical to the regular Dogma, but the new Onda HD fork is noticeably straighter. Underneath the paint there's no doubt a revised layup, and the rear disc hose for the SRAM Red 22 Hydro discs fitted to this bike is routed internally. Another stand-out bike is this one, belonging to some chap called Chris Froome... Nope, never heard of him... 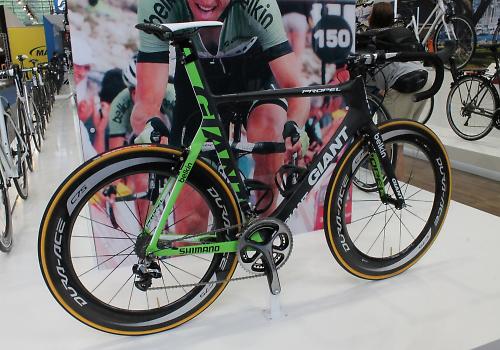 You spot a lot of bikes belonging to professional cyclists here at Eurobike, they've usually been whisked straight from the Tour de France. This is Bauke Mollema's Giant Propel in the Belkin colourway.

The most noticeable aspect of his bike is the very standard build, aside from the non-standard brakes (they're Giant branded v-brakes on the production models) there's pretty much no one-off or special kit. Here's the Giant Propel, the company's first ever aero road bike and launched at the beginning of the year, in a production colour scheme and fitted with Shimano Ultegra 11-speed.

Colnago - more disc-braked bikes but no change to C59 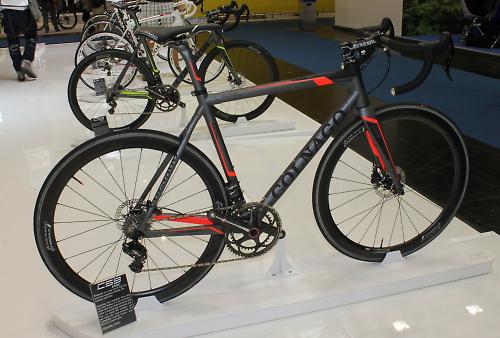 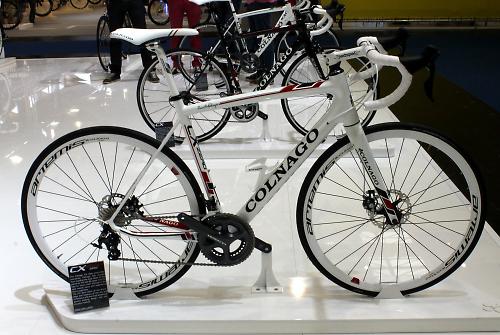 New from Colnago however is the CX Zero, a new carbon frame aimed at the growing 'endurance' segment, and it's available with or without disc brakes. It uses their Classic geometry which aims to minimise the saddle to bar drop with a higher front end, promoting a comfortable position. Aggressive race bikes are all well and good, but not ideal if you can’t comfortably reach the drops. They're using Shimano mechanical disc brakes however, not hydraulic, so clearly they're pushing it as a more affordable (relative to the C59) offering, with complete bike prices starting £3,499.95 with a Shimano Ultegra build. 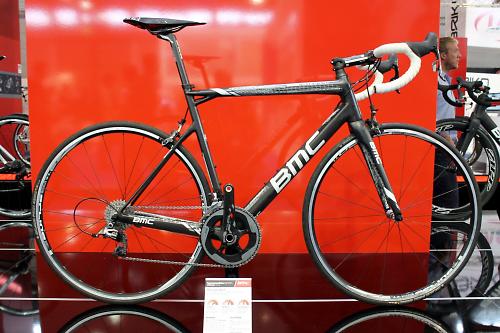 BMC TeamMachine SLR01. It's visually very similar, but the similarity is only skin deep, underneath there's a revised carbon layup and internal cable routing that has resulting in a decent weight saving. They claim 790g for a size 56c, that's a reduction from about 950g of the previous frame. 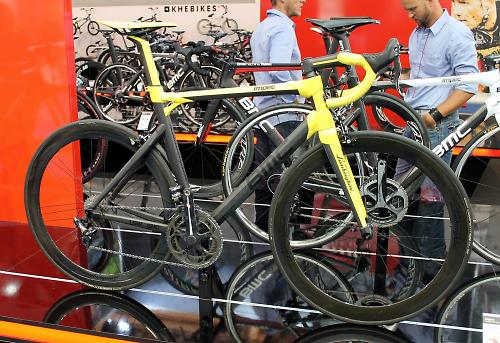 Rich enough to own a Lamborghini? Then you might be interested in this special version of the BMC Impec. The most special thing about is is the insane $20,000 price tag that exclusive badge adds. We'll have two.