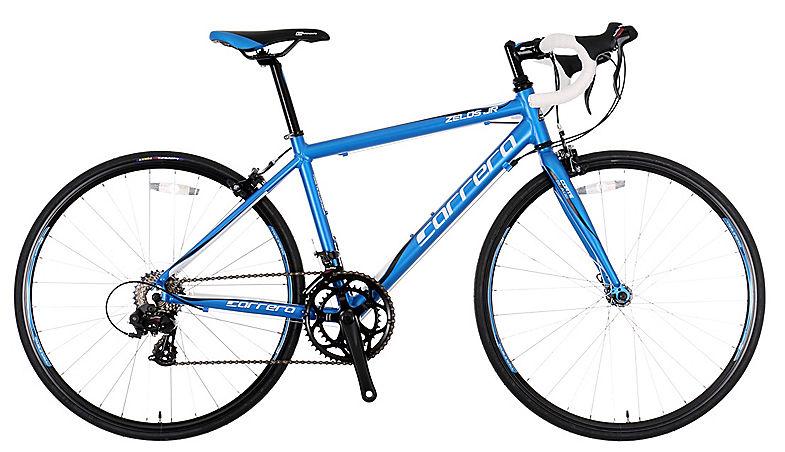 Halfords have launched a new road bike called the Carrera Zelos Junior, aimed at 11-14 year olds and priced at £249.99. It features a host of genuine road bike features and weighs a reasonable 10.9kg (24lb). If you want a future Wiggo or Cav in the family to support you in your retirement, this bike looks like a decent one to keep your kids interested in cycling.

This comes at a time when British Cycling say that their under-18 membership is soaring, with an increase of 42% in the past year. Go-Ride cycling clubs across the UK are also hosting an increasing number of entry-level youth cycling races. There were 249 Go-Ride Racing events in 2012, compared to 386 already planned since January 2013.

The Carrera Zeols is built around a 7005 alloy frame – available in just a 41cm size – fitted with a high-tensile steel fork. It comes with a junior-specific 48/34-tooth double chainset and a Shimano Tourney 7-speed gear system with STI levers.

The alloy handlebar is junior-specific too – 385mm wide – and it’s fitted with a quill stem so you should be able to adjust the height quite easily as your child grows.

The caliper brakes are a dual pivot design from Tektro, which is pretty unusual on a kids’ bike. The 650c wheels have double-walled alloy rims that should prove pretty sturdy, and they’re fitted with low-rolling resistance 23c tyres from Kenda.

The Zelos Junior is aimed at kids of both sexes and it weighs a claimed 10.9kg (24lb). Okay, that might sound a lot against many adults’ bikes we show you on road.cc, but components on kids’ bikes aren’t any lighter than adult equivalents. For comparison, an Islabikes Luath 700, priced at £499.99, is a little lighter according to the manufacturers’ figures: 10.2-10.4kg (22.4-22.9lb), depending on size. Weight isn’t everything, of course, but the Zelos Junior is half the price.

We’ve not had this bike in at road.cc but, on paper at least, it looks worth investigating. At the very least, it says something about the ‘good bikes for kids’ market if Halfords are launching into it. For more info, go to the Halfords website.

If you’d like to find out about Go-Ride opportunities for your children in your area, visit www.britishcyling.org.uk/go-ride.