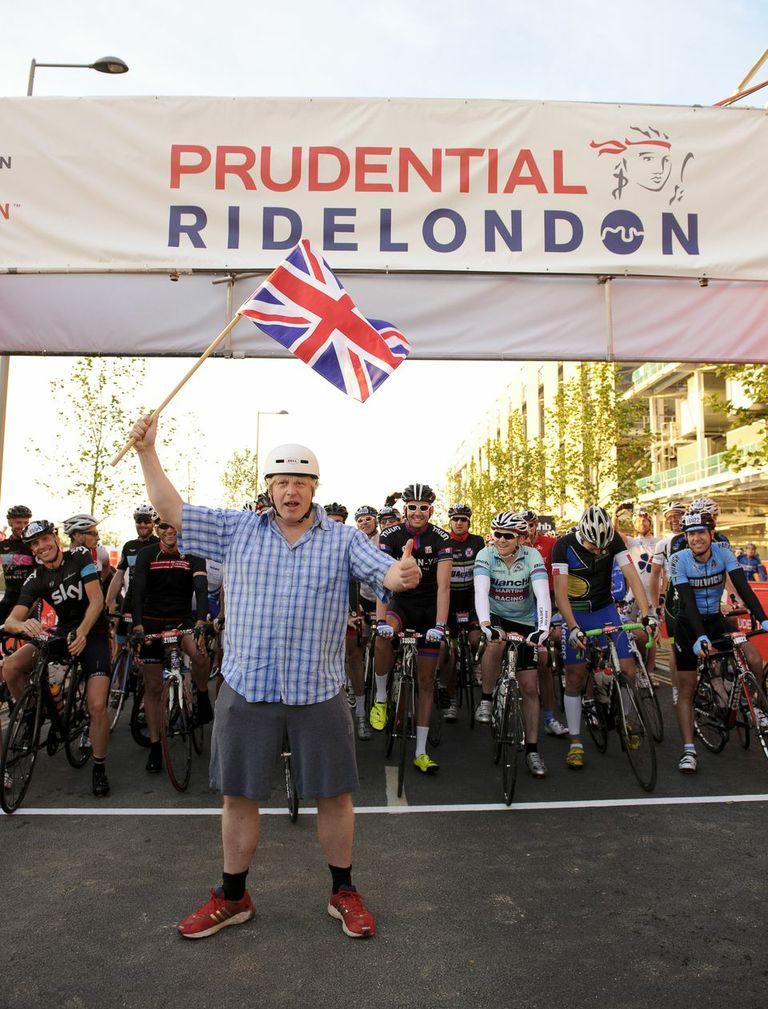 It's not every morning you set the alarm for a quarter to five to go and stand in an industrial wasteland with 20,000 people dressed in highly flammable materials, and it's even rarer that you do and it's actually fun. 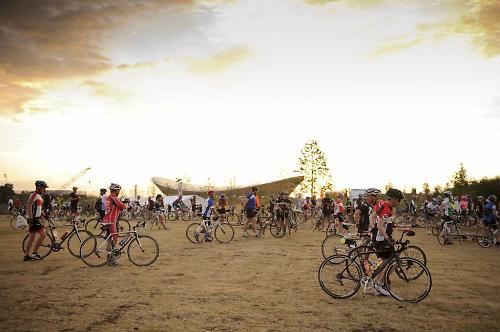 It's oddly beautiful as the sun rises, and the chirpy stewards and baggage handlers make it all the more palatable, as well as the compere happily dissing the more colourful outfits as they pass over the start line at the Queen Elizabeth Olympic Park in Stratford.

It's a mixed bag of riders queuing, with a prevalence of cheerful charity groups rather than your chiselled team kit types. Good start. 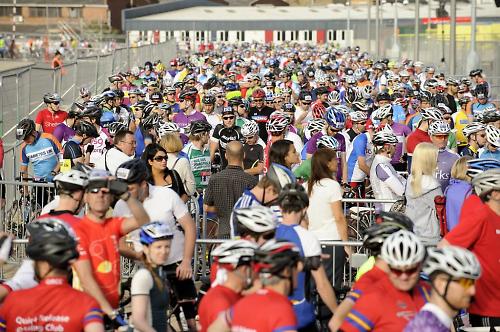 Lining up in start waves is remarkably efficient, given the sheer numbers in attendance, and there's plenty of nervous chatter - inevitable given this is the inaugural RideLondon-Surrey event, and no-one knows quite what to expect. 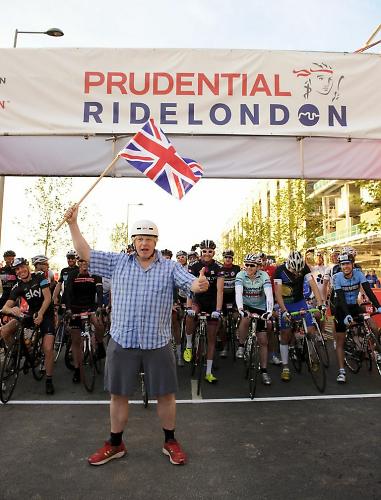 There's some sort of starting ceremony headed up by a suitably oddly-attired Boris Johnson and the first wave is off on a two-mile lead in, meeting the equivalent wave from the other side of the park on the A12. Charging down a deserted dual carriageway surrounded by the bleaker parts of east London at the crack of dawn has a surprising charm in itself, and anyone who felt the need for armwarmers or the like is pulling them off straight away.

It's a sharp left at the bottom onto the A13, just to be sure of catching the sunrise hitting the glass towers of the Wharf, and then a dip into the Limehouse Tunnel, usually forbidden to cyclists. It's airless and rather sweaty, and there's an audible sigh of relief as the group hits fresh daylight again. 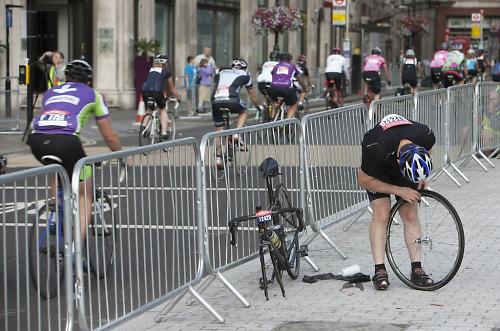 Down the Embankment, along Pall Mall, Cromwell Road... the route just rolls and rolls past London's landmarks, and barely a lump in the road makes it a relaxing sightseeing tour. Suddenly it's round a corner and into Richmond Park, taking in a pleasing amount of scrubby greenery as far as the eye can see. A couple of longish shallow hills around the 15 mile mark get the legs ticking over for the first time, and widens the field out (though it's never for a moment even approaching crowded).

Out the other side at Hampton Court there's the first of 3 'hubs' serving water, various energy concoctions, bananas, crisps - again manned by faultlessly friendly and encouraging staff who're only too pleased to chat as they fill your bottles. The hubs are supplemented by more regular water stops, which would have been invaluable had the heatwave continued; luckily a more temperate breezy, sunny 24 degrees prevailed.

The route now diverts into full-on suburbia, taking in Molesey, Walton on Thames and Weybridge - but the friendly locals are out in force to shout encouragement - which is an improvement on the friendly drunks in central London. 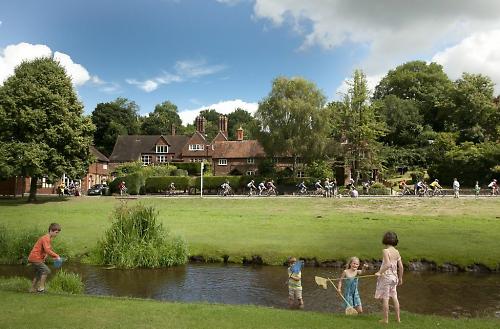 Aesthetically, things perk up in the southern reaches of the loop, where pretty villages are making the most of the car-free weekend with fetes and family days. Less idyllic (unless that's your thing) - this is where the hills start in earnest.

Daunting Leith Hill is first up - and there are a number of riders pushing before long. Other zip up with ease - there's a clear mix of ability here, and that's a good thing. There's a definite cameraderie with the odd push or shout of encouragement from one rider to another - giving just enough of a bosst to make it over the top to the world-famous Box Hill. Once that's out the way it's back to the fun part with a thrilling descent into Leatherhead - and the third hub, where everyone seems keen for a bit of a break.

It's worth noting that the big hills are entirely optional, with diversions that knock off one or both, taking the route to a more manageable 80 or 90-ish miles, depending on which are taken.

Most people cope fine with their own roadside punctures, but mechanics are available on course, and although there's a backlog of mechanicals causing some delays nearer the end, they're powering through all manner of breakdowns and most people seem happily back on the road in a few minutes.

There's more downhill than uphill in the final thirty miles, thankfully, and a pleasing tailwind sees decent speeds on the stretch back into the capital. Wimbledon's a short sharp climb and then a coast along the Common, then everything seems to move all too fast as the riders are back on Putney Bridge and onto the Embankment. 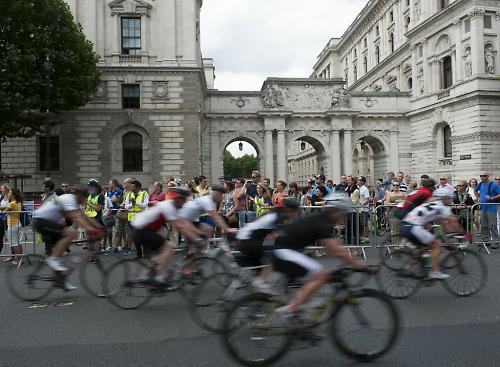 Parliament and Whitehall make for seriously inpiring sights if one looks up for long enough to notice, because it's time to sprint now to Trafalgar Square, where a bum-clenchingly tight left turn switches onto the red asphalt of the Mall, with thousands of spectators chanting and bashing the boards in time to the pumping of the music. 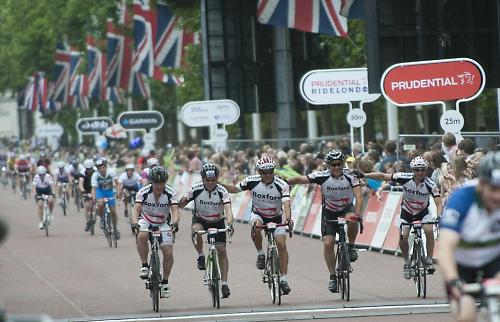 It's worth putting one's head up to enjoy the moment - and catch sight of Buckingham Palace dead ahead - but there's plenty of time for victorious photographs afterwards, wearing the unusually attractive medal with a little embossed route map on the back. 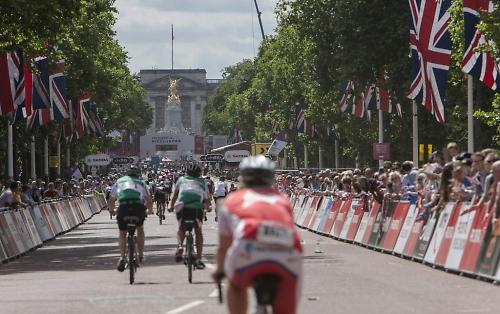 You're then efficiently funnelled through goodie bags areas, baggage reclaim, and eventually spat out into the 'festival' area, with a big screen to watch the pro race on (although they weren't working while we were there) and a welcome selection of healthy and unhealthy fast food (no prizes for guessing where the biggest queues were).

The option to stay to see how the pros do it (a lot faster, it turns out) a couple of hours later is an attractive one, and it's fun to find a TV and spot the countryside one has just huffed and puffed one's way though on a regime of minimal training and plenty of carbs.

Wandering around the course afterwards, both people who were here for the event, whether riders, friends or family, and locals and tourists who had just stumbled across it, seemed united in the view that it was a wonderful thing.

Perhaps not all, however - sharing a post-ride drink with a friend on Whitehall, we found ourselves next to a guy who as he watched riders on the closed roads go through the traffic signals on the last bend at the top of Whitehall observed sarcastically that it wasn't the first time he'd seen cyclists run a red light in London.

Maybe he was a taxi driver who had decided to take Sunday off rather than battle against the road closures?

Back to the event itself; it's the perfect ride for the laissez-faire, but there seems plenty to attract the more ambitious as well - it'll be interesting to see how the route changes based on feedback next year. But the £45 entry fee seems a price well paid for a sportive on this calibre of closed roads, with the kind of starry finish and sporting attitude it seems London has recently become incredibly good at.

While Sarah and most of the other riders were out on the course tackling the Surrey Hills, some of the keener riders were hitting The Mall and the finish; 20 or so riders contested a group sprint, 42-year-old Wladimiro D’Ascenzo from Italy taking the honour of being the first rider across the line by just half a wheel.

His time? A shade under four and a quarter hours, for an average speed approaching 25 miles an hour in old money, or 40 kilometres an hour.

But it was a rider who came across the line perhaps 20 minutes later who best typified the spirit of the event, inspired by the London Marathon whose owners helped stage it alongside Tour of Britain organisers, SweetSpot.

A little over half a kilometre from the finish, there was a tight left hand corner going from Whitehall into The Mall and under Admiralty Arch.

A rider had evidently come down there, and pushed his bike towards the finish, while clutching his shoulder in a tell-tale sign of a probable collarbone injury.

The race announcer noticed him when he was still 500 metres from the finish, and urged the crowd to give him applause and encouragement.

Approaching the line, and with a microphone picking up his words, the cyclist revealed his name was Joe.