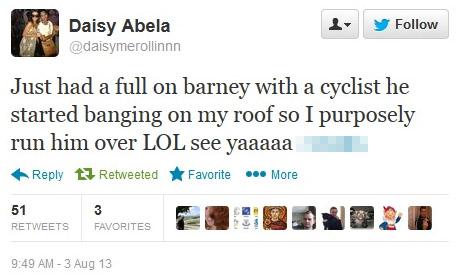 Daisy Abela: “I was not drunk, and nor was it a hit and run”

Driver regrets tweets, says she will apologise
by John Stevenson

Driver Daisy Abela, who has been at the centre of a Twitter storm over after she claimed to have “purposely run over” a cyclist, says she has spoken to the police about the incident, that she was not drunk and it was not a hit and run.

Asked to explain what had happened, Ms Abela told road.cc: “Just to clarify I have been in touch with the Metropolitan Police. This incident happened at 9am. I was not drunk and nor was it a hit and run.”

Yesterday, Ms Abela wrote on Twitter: “Just had a full on barney with a cyclist he started banging on my roof so I purposely run him over LOL see yaaaaa #c**ts”

Contacted today by road.cc, Ms Abela said: “There are too many internet trolls involving themselves in this situation when it is being dealt with by the police.”

Ms Abela declined to give an account of what had actually happened, “at the moment ... I will be speaking to the police and will contact you further based on their advice.”

She and several of her friends claimed that Abela had been harassed by other Twitter users after her initial postings.

“I will be speaking to the police today in order to discuss the harassment I have been receiving and how best to resolve this situation,” she said.

Ms Abela said that her tweets about the incident, “have been placed together by internet trolls and blown way out of proportion.

“The only thing I am guilty of is writing a silly tweet, which I regret and apologise for.”

While denying that the incident was as serious as her initial tweets made it sound, Ms Abela said she did understand how bad they looked.

She said: “The tweets look ridiculous reading them back but I thought the conversation was between me and a friend who understood I was joking. I did not realise this conversation would end up public and lead to thousands of people harassing me.

“I will be making a public apology for any offence that I caused other cyclists.”

Several friends of Ms Abela’s took to Twitter to defend her today, variously claiming that she had already spoken to the police, the incident was not a hit and run, the cyclist involved had not been injured and had not even been knocked off his bike.

However, initially none of those claiming to know Ms Abela were prepared to say whether they had been in the car at the time of the incident, or which police force Ms Abela had spoken to.

Then Robyne Frew took to Twitter to claim that she was in the car at the time of the incident. “She was taking me to work,” said Ms Frew. “[The cyclist] hit the wing mirror but didn't fall off and carried on riding.”

Asked if she’d seen Ms Abela deliberately hit the cyclist, Ms Frew replied, “He hit the wing mirror himself! He had his head in the passenger window.”

“I'm not trying to justify what the tweet said,” replied Ms Frew. “I've read it. And it never happened.”

She explained Ms Abela’s claim to have been “definitely still drunk” as “banter between her and 1 other person.”