£3.80/day for a round-town bike
by John Stevenson

A Dutch-style inexpensive bike rental scheme - dubbed Bike & Go - is set to roll out across 50 railway stations in the UK from August 13 thanks to transport company Abellio, according to BikeBiz.

That’s a lot cheaper than the charges you could rack up if you keep a London Barclays Cycle Hire Boris Bike for more than a couple of hours. Between 2 hours 30 minutes and 3 hours continuous Boris Biking will cost you £15, for example. But unlike the London scheme you’ll have to return your Bike & Go bike to the station where you picked it up.

However, where Boris Bikes are intended for hop-on/hop-off short trips, the idea of Bike & Go is that you’ll use the train to get from A to B, and then grab a bike to get to C, D or E, rather than catching a bus or taking a cab. 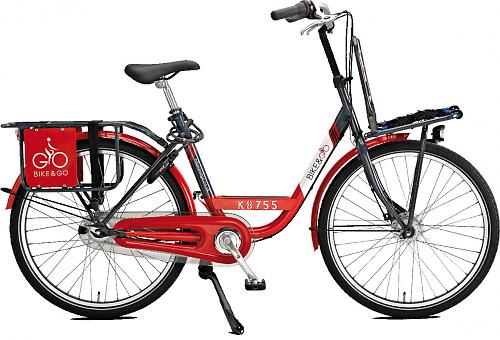 The Bike & Go bikes will be supplied by Raleigh

Bike & Go might also appeal to commuters who want to ride to the station and not have the worry of their bike being stolen. However, the weekly cost wouldn’t take long to add up, so it might turn out to be a way of trying out bike-train commuting rather than a permanent way of combining them.

If you’re not travelling alone, you can hire a bike for a friend too; you won’t both need to be Bike & Go members.

Abellio is the international arm of the Dutch government rail operator Nederlandse Spoorwegen and operates Merseyrail, Greater Anglia and Northern Rail. Bike & Go is based on the OV-Fiets bike rental network in the Netherlands, which has 230 locations.

Most of the 50 stations where Bike & Go will operate are in the North of England, starting with stations in Merseyside.

Stations that will have Bike & Go facilities include Bradford, Sheffield Meadowhall, Liverpool South Parkway, Bishop Stortford, London Liverpool Street and Colchester (all opening in August) with Harrogate, Altrincham, Ely and Ipswich among the locations to open in September, October and November.

Bike & Go is based on the OV-Fiets bike rental network in the Netherlands, which has 230 locations.

For more on Bike & Go, take a look at the scheme’s website, or have a watch of this explanatory video: