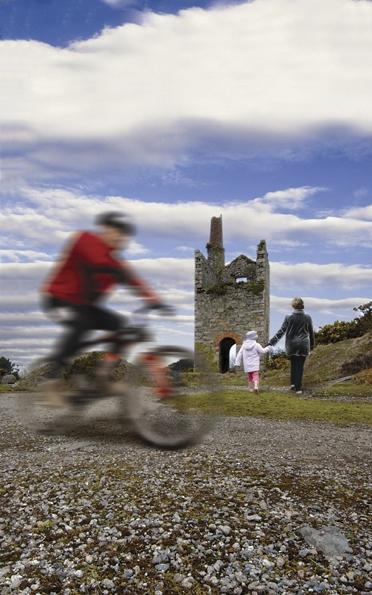 Cornwall is set to increase its cycle path infrastructure with the opening of a network of multi-use trails this Saturday. The £6 million regeneration project, which will also help to restore and conserve historic mine structures in central Cornwall, is being officially opened with a series of events for the community.

The Mineral Tramways Heritage Project adds 25km to the existing 31km of multi-activity trails and links in with existing routes such as the Coast to Coast and the Great Flat Lode Trails. The trail is one of the most popular in the south west and used by hundreds of people throughout the year.

Cornwall Council cabinet member for health and well being Neil Burden said: “Whether you are a walker, cyclist or horse-rider, the expanded network will offer a wealth of opportunities to exercise both mind and body. Being mainly traffic-free, the network will offer improved and safer access to schools, places of work, local facilities, historic settlements and visitor attractions.”

Cornwall councillor and chairman of the Mineral Tramways Partnership Mark Kaczmarek will join Wendy at the official opening.  He said: “I am delighted that the creation of the 56km network of trails will offer people a unique opportunity to access a wide area that is rich in mining heritage.

"The project has combined better access to the carefully conserved buildings and the landscape of our proud mining past with spectacular views, exceptional wildlife diversity and the health benefits of getting out and using the trails.”

The day will feature a variety of different activities at each of the three main hubs - Elm Farm Coast to Coast Cycle Hire, King Edward Mine, Troon and Bike Chain Bissoe Bike Hire, and they include guided cycle rides, cycle demonstrations, walks and horse rides, face painting, live music, a mountain bike assault course for children and BBQs.

Much of the network closely follows the tramway and railway routes once used to transport ore and vital supplies to and from the area’s many tin and copper mines to ports such as Devoran and Portreath.

The Mineral Tramways Heritage Project is a £6 million Regeneration Project. It is managed by Cornwall Council and funded by Objective One, the South West Regional Development Agency, the Heritage Lottery Fund and Parish and Town Councils in the Project area.

Wendy said: "The Grand Launch of the Mineral Tramways Network of Trails is an excellent initiative by Cornwall Council which will allow the beautiful Cornish countryside to be explored by those who are interested in the outdoors.

"The trails will provide a fantastic off-road alternative for individuals and families who enjoy cycling, horseriding, walking and running whilst having the opportunity to appreciate the mining history associated with the Trails. I'm very much looking forward to being involved in the formal opening of the Trails and to taking part in Saturday's action-packed event on the 26 September."

Thirteen mining villages within the project area have also had improvements made to them and new interpretation panels will help bring to life the exciting story of an area that sparked pioneering developments and was once the richest in the country.