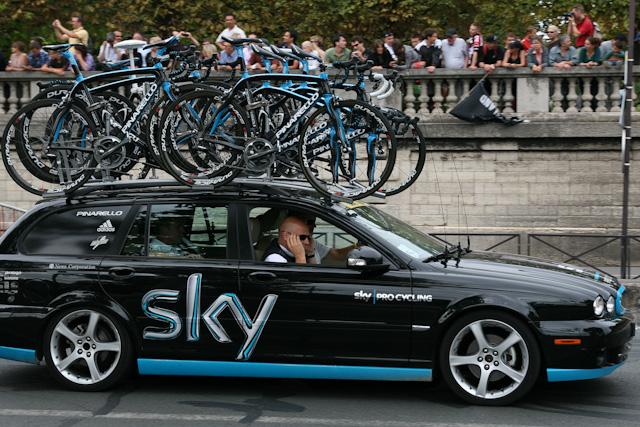 Froome had to fight off attacks from Movistar riders Rui Costa, Alejandro Valverde and Ruben Plaza after support rider Peter Kennaugh crashed and  Richie Porte was unable to maintain the pace on the climbs.

“Yesterday once I got into that front group and was isolated, it did sink in that was going to be a really long day and I’m going to have to dig in,” Froome said. “I just had to make the most of the situation I was in, try to limit any losses if there were going to be any.”

Make the most of it he did, calmly fighting off attacks and retaining the race lead.

But it seemed that overnight Team Sky had gone from undoubted race favourites to looking vulnerable. “I’d put it to you that the day before our team was good enough to put a minute or so into our opposition,” said Brailsford.

Brailsford praised Froome’s resilience. “You could argue, using a boxing analogy, he’s taken the biggest right hook on the chin he’s going to take and he didn’t flinch,” he said. “You always learn more from adversity than success and we learned a lot yesterday.”

He declined to guarantee there would be no repeat of Sunday’s problems. “I haven’t got a crystal ball,” said Brailsford. “It’s a valid question. We’ve got a team of committed riders, we’re leading the race, we’ve got some time trials and difficult stages to come and we’ll try to manage our racing the best we can for the rest of the race.”

Team Sky lost domestique Vasili Kiryienka on Sunday as he finished outside the time limit. They also almost lost Peter Kennaugh who crashed off the road and down a hillside. Fortunately, he was not seriously hurt.

“I’ve got some cuts and bruises but I’m feeling good,” he said. “I can’t wait for the mountain stages to come.

“There are a few flats to come and the time trial where I can take it relatively easy. In another week I should be ready to go for [Mont] Ventoux.”

Another of the team’s top rider, Geraint Thomas, is riding with a fractured pelvis after a crash in the opening stage of the Tour.

“This is the worst injury I’ve ever had and it has definitely been my most painful week on the bike. When I had my spleen out in 2005, I was obviously not riding my bike and I was in hospital on morphine,” Thomas told the BBC.

“I’m feeling better every day, and yesterday I had the best day so far. If I keep going as I am in the final week I should be able to play a strong role again.”

Thomas has been assured that riding with the injury poses no extra risk.

“The bone doctor said I will not do any more damage by riding, because the fracture is on the bone that goes up my back and I am not sat on it. It will be healing; if I’d have caused damage in long run I wouldn’t have carried on and jeopardised my career.”

Brailsford seems to relish the coming fight, especially as his team no longer looks like a dominant automaton.

“It’s the whole idea of sport, isn’t it?” he said. “This notion that we just turn up and win easily isn’t something that sits well with us.

“You can’t just rock up and expect to win easily because it’s about the challenge of your opponents and how you handle them.

“When your backs are against the wall, how does the team respond to that challenge?”

Thomas thinks the team will return to full power over the next days. “By the time we get to the next mountain stages we’ll be stronger. I’ll be stronger, hopefully Pete won’t have fallen off again and Richie won’t have one of those bad days.

“I’m up for it. We see it as a fight. It’s like with the track and the Aussies who we’ve always had a rivalry with.

“Coming up to the London Olympics we turned it around when it mattered. I’m confident we can do the same here.”