A quick roundup of some of the latest products from the road cycling world this week, including a collapsible helmet (yes, really), a lighter helmet from Catlike, the making of Peter Sagan's custom painted Tour bike, special Tour de France glasses from eyewear giant Oakley, Shimano's blue shoes and David Millar's custom Fizik shoes. And Mark Cavendish on not racing hydraulic rim brakes.

Oakley have released Tour de France special edition versions of their RadarLock XL, RadarLock Path, Half Jacket and Fuel Cell, finished in limited edition frame and lens colours. The Tour de France logo is laser etched on the corner of the lens.

The RadarLock XL has been inspired by the French flag, and combines white arms with red and blue details, along with a Positive Red Iridium lens. They cost £205 and are supplied with a second lens and custom Microclear bag.

We've already covered in detail the 'Hulk' bike belonging to Peter Sagan, a gift from his Cannondale team. This video below shows the creation of the specially painted frame, from the handpainted touches to it being built up.

If you’ve ever been sitting outside a café in France and wondered why the locals’ Perrier is turning red, green, or whatever, the answer is Teisseire syrups – nothing better than a bit of mint or grenadine to spark up your sparkling water.

Teisseire also happens to be supplier of the ‘Sirop Officiel’ to the Tour de France – and just look at the jersey themed bottles they’ve done to celebrate the 100th edition.

Hopefully, there will still be some to be had come the final weekend in Paris – if so, they’re coming back on the Eurostar with us.

If you’re in France in the coming weeks and find a decent sized food store such as a Carrefour hypermarket, you should be able to track these down for a couple of euros.

The Collapsible Helmet has been designed for those cyclists who have “limited storage or carrying capacity” says the inventor, Michael Rose. The centre section is a folding structure made from polypropylene with an expanded polystyrene (eps) impact liner and acrylonitrile butadiene styrene (abs) outer shell. When it’s folded away, the straps wrap around and keep it closed. This isn't the first time we've seen a folding/collapsible helmet, there's that odd looking one from BioLogic.

As well as allowing the helmet to halve in size for storage, the central section is designed to be replaceable so, after an impact that leaves stress marks on the folding structure - that's how it works - that can be replaced. Worryingly, the helmet hasn’t passed the EN1078 drop test, which involves a 2 metre drop with a deceleration force of not more than 250G. So, still work to do then.

More helmet news, this time from Spanish company Catlike. They’ve launched the new Mixino, which is featuring on the heads of the Movistar team riders in the Tour de France.

Alex Dowsett isn’t riding the Tour, but does appear in this video in which he talks us through the technical details of the new lid, which he declares is “the best helmet I’ve ever used.” He would say that though, wouldn’t he?

The new Mixino is lighter than the previous Whisper that has been around for the past couple of years, at just 225g. Catlike have made a number of other changes too, including an updated retention system that, as well as being lighter, is much more adjustable. The micro-dial adjuster can be operated with one hand on the move.

We covered Shimano's special Tour edition R320 shoes, easy to spot thanks to their blue colour, in last week's Tech Roundup. But here's a little video from Shimano about the shoes. Could blue shoes catch on? What do you think?

And lastly, we finish this edition of Tech Roundup with a look at the custom Fizik shoes David Millar has been gifted for the Tour de France. Remember the similarly custom shoes Fizik supplied to Jeremy Roy (who rides for FDJ) for the Tour that we covered last week?

Well, David has got some too. They feature custom painted soles and his name printed on the middle strap. Should making him easy to spot.

Mark Cavendish off hydraulic, back on calipers

Oh, one more final, final thing before we really must finish this article. Remember the hooplah from SRAM about Mark Cavendish riding their new hydraulic rim brakes at the start of the Tour de France. Well, he definitely hasn't been riding them since the first stage. We've been paying very special attention to his bike and, apart from that crash where he swapped onto his spare bike fitted with the hydro brakes, he's been racing on his regular caliper setup. 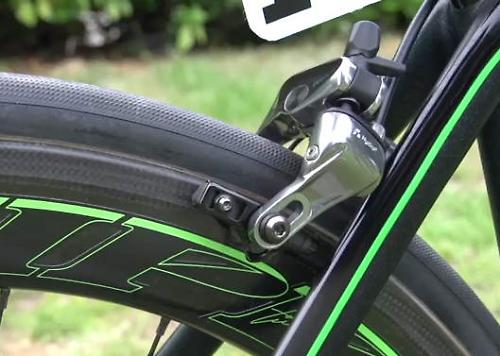