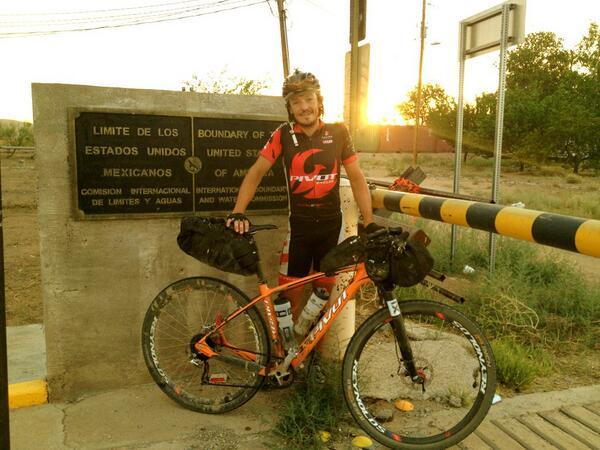 Forest fires forced endurance star to divert his route - and the Adventure Cycling Association won't accept it...
by Sarah Barth

Round World record breaking cyclist Mike Hall has reached the finish line of the 2013 Tour Divide in the fastest time yet - but just missed out on the record thanks to route diversions he was forced to take due to forest fires.

Mike finished up at the Mexican border with the USA in 14 days, 11 hours and 55 minutes, a big improvement on the previous record of 15 days, 16 hours, 14 minutes set by Jay Petervary in September 2012.

He's missed out on securing an official record, because racers must ride the full official route as mapped by the Adventure Cycling Association to collect a win.

The Tour Divide is a self-supported mountain bike race which runs the full 2,745 mile length of the Great Divide Mountain Bike Route, from Banff in Canada to Antelope Wells in New Mexico.

The route is unmarked and circuitous, requiring navigational acumen. It travels through remote backcountry with Grizzly and Mountain Lion density. Intervals between services are frequently 100+ miles and demand calculated food/water resupply-or else. Riders must also find shelter each night or bivouac trailside.

In minutes the Rockies' dynamic mountain weather can wreak havoc on route surfaces, skewing even the most near-term travel projections. And, of course, it wouldn't be a grand tour without the geopolitics of negotiating an, albeit lower-security, international border crossing at Port of Roosville, Montana.

There are no compulsory rest periods or specified distances racers must travel daily. The race clock runs non-stop.

Mike attempted the Tour Divide last year prior to his round the world effort. “I want to go back next year,” he told us at the time.

“I got injured last time. Experience counts for a lot on the Tour Divide. You learn a lot the first time and it seems a waste not to go back and use that experience. It’s the type of route that gets under your skin and into your blood.”

There are still a lot of riders out there whose progress can be followed on the tracker - look out for 2nd place finish maybe tomorrow -only 200miles behind Mike.

Mike was riding a Pivot Les hardtail with a a Kinesis IX carbon 29er fork and 1 x 10 speed XTR transmission.

The wheels were Reynolds 29er carbon rims drilled with 32 holes for extra strength. On board was also a Garmin 705 and Exposure’s dynamo hub to power their Revo light.

He goes through all his kit in detail here.