The Dogma 65.1 Think 2 is the bike being ridden by Team Sky’s young sprinter in the making, Ben Swift. One of his team bikes was on show at Shimano distributor Madison’s annual dealer and press show this week, one of the few chances we’ve had to get up close and personal with the latest Dogma. It looks the same as the previous Dogma 2, with the distinctive love-or-hate wavy forks and seat stays and muscular shaped head tube, but underneath the black and blue Sky livery is an all-new carbon fibre layup. The goal with this updated frame was to make it a bit stiffer, and they’ve achieved that by using a 65-ton Torayca 65 high-modulus 1K Nanoalloy Carbon, which has a higher strength-to-weight ratio. The Dogma 2 used 60 Ton carbon fibre.

Torayca is a carbon fibre produced by Japanese company Toray, one of the biggest producers of carbon. They developed the 65-ton carbon for the new frame that is stronger and more rigid than the previous grade of carbon. This combines with Pinarello’s asymmetric design principles. There’s more carbon where it’s needed to resist the rear of the frame flexing when you stamp on the pedals. This also means they can use less carbon where it’s not needed, helping to reduce the frame weight. As well as the new carbon fibre, Pinarello have worked on making it more integrated. As this photo shows, it will easily accept electronic or mechanical groupsets with new interchangeable cable stops. Looks very neat and tidy, and works with Campagnolo (as per Movistar’s team bikes) as it does Shimano. 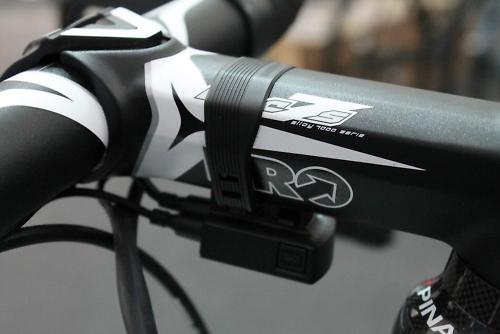 A brand new Shimano Dura-Ace Di2 9070 11-speed groupset adorns the bike. Notice something, um, missing? Yup that’s right, there’s no battery. There is, it just now resides inside the seatpost making for a far cleaner frame. The control box can be used to charge the system, that small flap on the right lifts up. 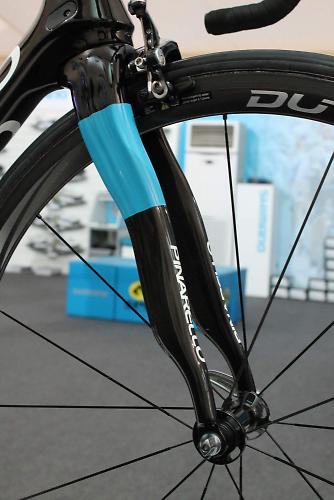 Plenty of carbon fibre flowing between the downtube and seat tube, this junction contributes hugely to the frames stiffness. 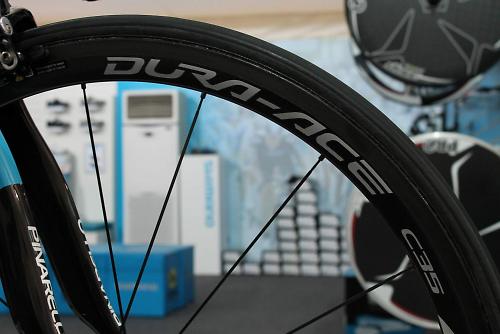