We’re in Corsica ahead of the Tour de France starting this weekend and most of the teams are here, well the mechanics and their bikes are, giving us the chance to have a snoop around at the latest bikes and equipment you can expect to see in the race. And first up is Ridley who have redesigned their Dean time trial bike. It’s not being officially unveiled until Friday so we won’t have the full details about it until then, so in the meantime here’s a sneak peek. 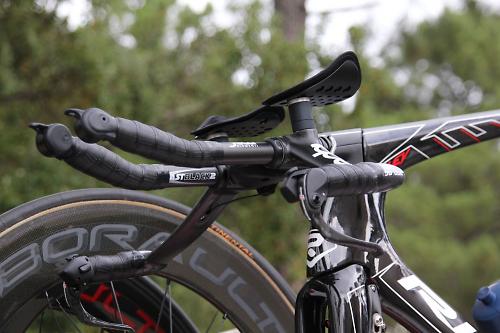 Compared to the previous Dean, it’s clear they’ve followed the latest trend in TT bike design with an integrated stem and fork that smooths the line from the faceplate to the top tube. There’s still the unique F-Splitfork, first developed by Oval Components and first featured on the original Dean, before being used on the Noah Fast road bike. 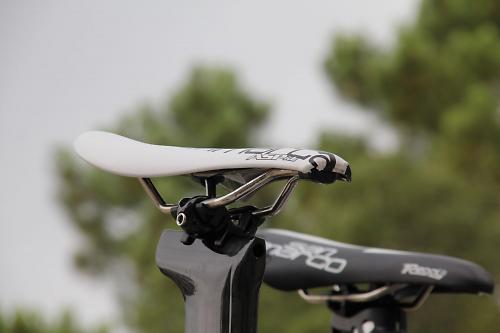 The UCI have strict rules about saddle position on time trial bikes, bascially the nose can't extend too far beyond the bottom bracket, so this rider has had the nose of his San Marco Aspide chopped off to get it in the desired position. 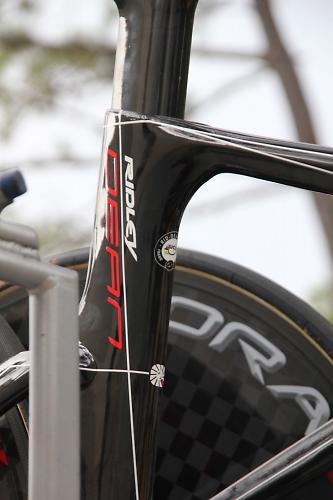 The integrated seatmast has gone and there’s now a separate aero seat tube with the clamp hidden inside the top tube. The seat tube hugs the rear wheel and the seat stays bridge out and offer substantial clearance around the the disc wheel. Naturally, all cables and wiring is routed internally. Integrated too are the brakes, which are the same F-Brakes (mini V-brakes) as used on the Noah Fast. They’re actually a carbon fibre component of the frame and fork, and produce a very seamless design. The front brake sits behind the fork while the rear brake is behind the bottom bracket. The frames are built up with Campagnolo Record EPS drivetrains and wheels. And spotted on this bike are Campagnolo’s time trial shifters, introduced last summer. The shifters return to centre so they’re always easy to reach when riding.

More on the new Dean on Friday.