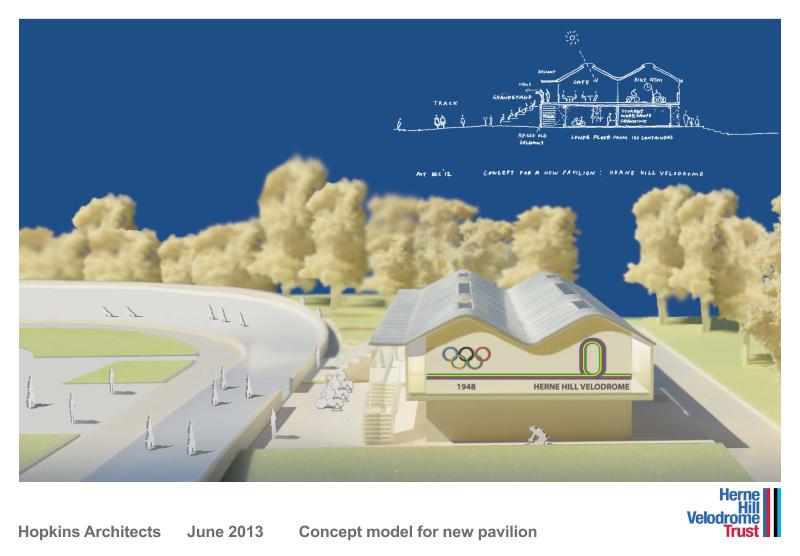 Herne Hill Velodrome's main track is now floodlt for the first time in its history – the lights, along with a new junior velodrome and a multi-use games area have been opened, marking the next phase of the redevelopment of the last surviving venue of the 1948 Olympic Games.

This latest round of improvements was funded with the help of Southwark Council’s Olympic Legacy Fund which aims to build on the success of London 2012. Also revealed today is the concept design of a new pavilion.

Herne Hill Velodrome Trust has also announced what it describes as a “stellar line up” of ambassadors, drawn from the world of cycling and beyond, and including key figures associated with London 2012 such as LOCOG chairman Sebastian Coe and former Olympics minister Tessa Jowell.

The track had already been resurfaced after British Cycling took that 15-year lease, so the various new facilities opened today, developed in consultation with users including cyclists, schools and disabled groups, represent the second phase of Herne Hill’s redevelopment.

The third will be that new pavilion, with the concept design that was unveiled this afternoon the work of Hopkins Architects, who were behind the Velodrome at the Olympic Park in Stratford. 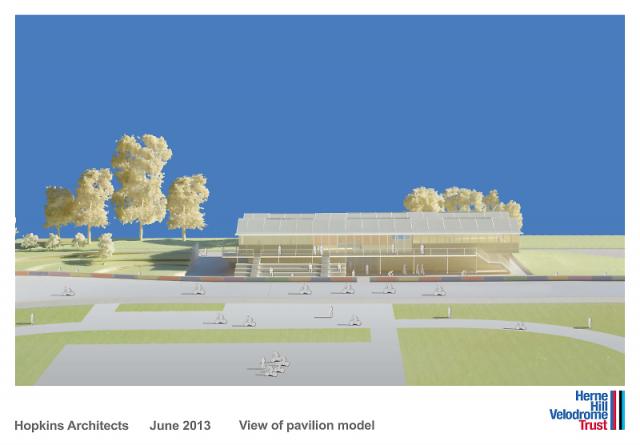 Herne Hill Velodrome Trust, the charity set up to help save the historic site, says the pavilion will cost £3 million and it is looking for partners and sources of funding for the facility.

Prior to proposals being submitted to The Dulwich Estate and Southwark Council, consultation will be held with cyclists as well as local residents.

Hillary Peachey, Chair of the Herne Hill Velodrome Trust, the charity set up to help save the historic site, said: “Thanks to all our partners, we have completed two phases of the project, and the third – a new pavilion – is just beginning.

“We desperately need new indoor facilities – a café, space for winter training, showers and toilets, changing rooms, none of which we have at the moment.

“The track itself is thriving and we want to inspire a greater range and ability of cyclist, from toddlers on balance bikes to disabled riders on hand bikes.

“What better 125th birthday celebrations could we have in 2016 than to celebrate the opening of a new pavilion?”

British Cycling president Brian Cookson, who earlier this week announced he was standing against Pat McQuaid for the UCI Presidency, said: “Herne Hill is living proof that cycling is a sport which can be trusted with legacy venues.

“Last year we had a first British winner of the Tour de France in Sir Bradley Wiggins.

“His journey to the Champs Elysées started here at Herne Hill, and the work British Cycling does to sustain facilities like this one are essential if we want to continue to produce world beaters like Brad who have inspired record numbers to get on their bikes.”

Councillor Peter John, Leader of Southwark Council added: “We are very proud to be a part of the restoration of such an iconic sporting venue.

“As the last stadium for the 1948 Olympics, it’s vital that efforts are made to restore the Velodrome which resonates so well with our residents.

“It’s been a real pleasure partnering with the Trust and we look forward to visiting the new pavilion.”

The track and facilities are now operated by Velo Club Londres, whose chairman, Peter Cattermole, said: “So many things have improved since the volunteers from the Velo Club Londres took over the management and running of Herne Hill Velodrome 8 years ago.

“We have introduced 18 affordable weekly public sessions along with sessions for schools, corporates, community groups, women and girls, disability groups plus cycling and triathlon clubs.

“This is in addition to hosting more open race events than any other Velodrome in the UK, plus the country’s largest interschool track cycling competition.

“These new facilities will allow us to run even more sessions and events, for an even wider range of cyclists all year round.” 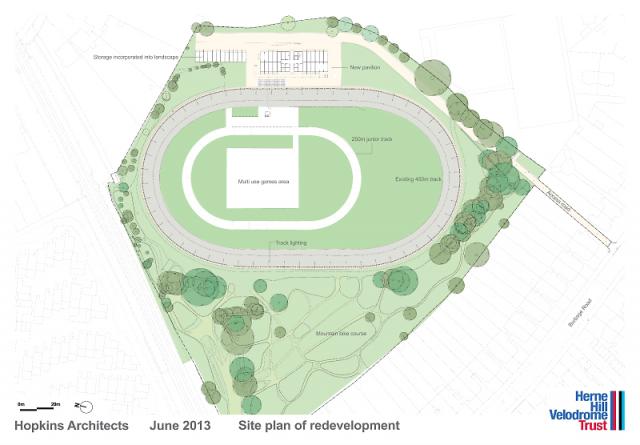