The UK has been named the tenth most cycle friendly nation in Europe - just ahead of France - in a benchmarking exercise by the European Cyclist Federation. No points for guessing the winners: The Netherlands and Denmark tied for first place in what the ECF call their Cycling Barometer.

There were surprises though, Spain may be a powerhouse when it comes to producing top class pro cyclists but it languishes near the back of the pack of the er, Barometer with Portugal for company and only Bulgaria, Romania; and Malta behind it.

Countries were judged on five different criteria: Modal share; Safety; Cycling Tourism; Bicycle sales per 1000 inhabitants; and Advocates - membership of cycling organisations as a percentage of the overall population - you can see how each country scored in these categories below.

Points were then awarded based on a nation's ranking in each category and those points totalled up to give the overall scores. Denmark and the Netherlands both scored 125, while the UK back in 10th got 80 points - bike sales pushed the UK overall score up. it came fifth in terms of bicycle sales per 1000 inhabitants - just behind Finland and remarkably close to the Netherlands - Denmark was second, and the country with the biggest bike buying habit in Europe?…Slovenia (but you knew that).

The ECF launched the Cycling Barometer ahead of next week's Velo-City 2013 conference in Vienna which brings together cycling organisations and policy makers, including EU Transport Commissioner Sim Kallas. One of its aims (apart from making the Dutch and Scandinavians feel smug) is to demonstrate the need for verifiable European wide measures of the levels of cycling in EU member states. The ECF's measures are based on five areas it sees as important and it used European wide data gathered on member states to collate it's figures rather than national data from each country - in a bid to factor out the different approaches taken to gathering such data.

ECF Cycling Barometer Project Manager Chloe Mispelon said: "We are confident in our results which show a strong correlation with other data and knowledge about cycling but we call on the EU Horizon 2020 research program to establish data that is updated and maintained through to 2020. The barometer shows that we really need reliable statistics on cycling in the EU to enable governments and advocates to assess progress on cycling and to allow collaborative working between countries to improve cycling for European citizens.”

One result of the methodology is that if there is no data available for a country in a specific field then it will be at the bottom of the rankings for that area and its place in the overall rankings will suffer too. This goes some way to explaining Malta's pitiful overall score of 15 some way behind Cyprus despite its rather alarming score for Safety - no data was available for either Malta or Bulgaria in this category.

Possibly the biggest issue with the data is that the different categories aren't weighted, so even though the UK's modal share is poor and it's mid-table in terms of safety, the bike sales and advocacy push the overall rank up. Many would argue that the true barometer of whether a nation has embraced the bike isn't people buying them, or talking about them, but being able to ride them in safety, and doing so in large numbers. 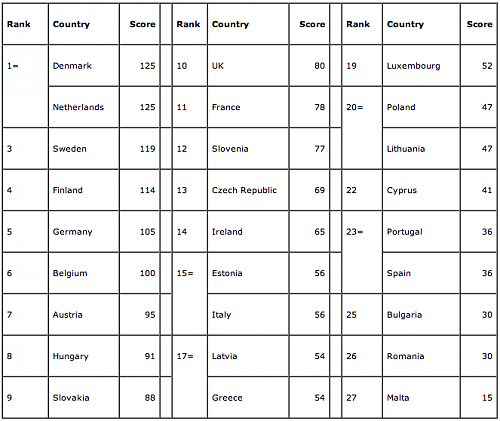 No surprise that the Netherlands and Denmark are at the business end, but Hungary have sneaked into second place with a modal share of approaching 20% - who knew? The UK is languishing seventh from bottom. The ECF's calculation of each country's modal share is based on a European-wide survey rather than national government statistics.

You do NOT want to be spending too much time cycling around Cyprus, it would appear from these stats. It has over three times the casualty rate of any other country included. We're mid-table. Figures for this were calculated by muliplying modal share by the population of the country and then dividing the number of cyclists killed by the population of cyclists to get what the ECF term a "relative safety index".

As quite a densely populated country with a small modal share, it's not hard to see whay we'd be at the bottom end of this one; although leisure cycling and transport cycling aren't intrinsically linked (the Finns top the table here but not in modal share) more regular cyclists seems to correlate fairly well with more leisure journeys too.

We're fifth here. The UK has always has a fairly strong bike market, although it's tended to be dominated by lower-end products and it's clear from the other graphs that lots of bike sales doesn't automatically mean lots of bike journeys.

The UK is fifth again but it's clear that while the top four have managed to turn their high advocacy levels into high bike usage, that's not really been the case over here.