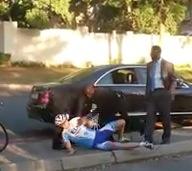 South Africa’s diplomatic police unit has opened a case against a cyclist involved in an altercation with occupants of a black Mercedes-Benz saloon carrying a foreign diplomat, despite video footage that shows the rider being forced to the ground and manhandled by men, including one believed to be a bodyguard of the vehicle’s occupant.

According to News24, the cyclist, Hein van der Merwe, is accused by the driver of the vehicle, one SR Khoza, of the offences of crimen injuria [used in cases including ones relating to road rage, it is defined as “unlawfully, intentionally and seriously impairing the dignity of another”] and intimidation.

The incident took place in Pretoria, the country’s executive and administrative capital and therefore home to foreign embassies, last Wednesday, although as yet the cyclist appears to have been unable to establish the nationality of the diplomat involved, whom he describes as “a Caucasian with a darkish skin, thick black hair, and a thickish dark black beard.”

In a comprehensive account of his version of events to the news website eNCA, the cyclist says that the vehicle ignored a stop sign and cut across him while he was out on a training ride, leading him to try and attract the driver’s attention, first by shouting as he rode alongside the vehicle, then by banging on its wing mirror.

At that point, he says, the driver attempted to swerve into him – the cyclist claims that the driver himself later told him that this was on the instructions of the diplomat in the vehicle – and later threatened to brake his neck after the vehicle stopped.

He adds that the diplomat – whom he says was asked by a police officer why he had not been driven straight to his embassy, as required by diplomatic protocol – “directly threatened me and told me I was going to go to jail and that he will see to it.”

The cyclist took photographs of the vehicle, which carried diplomatic plates, as well as one of the diplomat himself. Spotted doing this by a bodyguard, he says the driver then knocked his phone out of his hand, breaking the screen, and that he was assaulted by the bodyguard, the point at which the video, taken by a schoolboy who was at the scene, kicks in.

The incident was attended by officers from the diplomatic police unit, summoned by the diplomat or his driver, who Mr van der Merwe said were “rude and arrogant” and, after taking his details, “drove off as of nothing happened.”

He added that he went to a police station to report the incident and open his own case, but was told that officers there were unable to assist them and he needed to go to police headquarters instead due to the involvement of the diplomatic police and foreign diplomats.

News24 says that it has been unable to secure a comment regarding the incident from the South African Police Service communications department that has responsibility for the diplomatic unit.