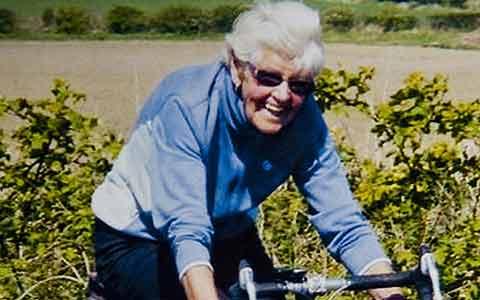 The families of Audrey Fyfe and George Dalgity, the Edinburgh cyclists killed nearly three decades apart by driver Gary McCourt, will today join CTC chief executive Gordon Seabright in delivering a letter to the Crown Office & Procurator Fiscal Service (COPFS) requesting it to appeal against what the national cyclists’ organisation describes as the “scandalous” sentence given to the motorist earlier this month.

McCourt, aged 49, was given a 300-hour community sentence and banned from driving for five years after being found guilty last month of causing the death by careless driving of Mrs Fyfe, aged 75, in August 2011. The sentence was greeted with a mixture of disbelief and outrage by cyclists and cycling organisations.

After the jury at Edinburgh Sheriff Court delivered its verdict in the case last month, it was revealed that McCourt had previously been found guilty in June 1986 of causing the death by reckless driving the previous October of 22-year-old student Mr Dalgity, who died of head injuries a week after being struck close to his home in Edinburgh by a Ford Cortina driven by McCourt, also aged 22 at the time.

According to CTC – Mrs Fyfe had been a member of the organisation for more than five decades at the time of her death and met her husband Ian through it – 2,800 separate emails have been sent to the COPFS protesting about the sentence handed down to McCourt on 3 May.

The judge who sentenced him insisted there were no aggravating circumstances that would require a custodial sentence to be imposed – presumably many of those emails will have questioned whether his previous conviction was in itself one – and instead suggested that Mrs Fyfe had contributed to her own death by not wearing a cycle helmet.

Rhia Weston, CTC’s Road Justice Campaigner, said she believed that Mrs Fyfe’s choice not to wear a helmet may have been a factor in the sentence Sheriff James Scott imposed on McCourt.

“It is debatable whether or not a helmet might have made a difference,” she said, “but more importantly it is legally irrelevant.

“The Sheriff’s role was to sentence McCourt for the seriousness of a motoring crime which cost a cyclist her life. Given McCourt's previous conviction, he should have received at least a lifetime driving ban."

That sanction is the very minimum that CTC is urging COPFS to press for, although the Scottish Government department, which performs a similar function to the one carried out by the Crown Prosecution Service in England and Wales, has said that it is giving “careful consideration” over whether to appeal McCourt’s sentence on the grounds that it is “unduly lenient.”

There were plenty of aggravating circumstances involved in the death of Mr Dalgity, however, according to details secured by CTC through a Freedom of Information Act request.

CTC says that McCourt, who held a provisional licence at the time,

“… was driving unsupervised and without licence plates. He pleaded guilty to the offences of driving without insurance, driving without a full licence and without supervision or licence plates, and for leaving the scene without exchanging details or reporting the collision to the police, and failing to produce his licence afterwards.  He pleaded not guilty to causing Dalgity’s death by reckless driving – but was nonetheless found guilty.  For the ‘causing death by reckless driving’ offence, he received a 1-year custodial sentence.”

According to contemporary newspaper reports, clippings of which were given to CTC by a former neighbour of Mr Dalgity, McCourt was also given a ten-year ban from driving.

The comments of the judge presiding over that earlier trial at the High Court in Edinburgh, Lord Cowie, contrast sharply with those of Sheriff Scott, although it should be borne in mind that the charges in that previous case were more serious than those in the more recent one.

“A young life has been destroyed by your unjustifiable and boorish conduct on the road,” Lord Cowie told McCourt.

“I think the appropriate thing to do is give you a very sharp lesson that you cannot behave in this way on the roads in this country.”

Mrs Fyfe’s husband, Ian, to whom she had been married for more than 50 years, will accompany Mr Seabright in delivering the letter to COPFS at 11am this morning, together with Mr Dalgity’s sister, Ann.

Yesterday, Mr Seabright met with Ian Fyfe and his daughter Linda Hamilton, who together with her sister Aileen Brown got in touch with CTC to urge it to fight for justice on their mother’s behalf.

Last week, Ms Brown, a member of Bath Cycling Club who had accompanied her mother on cycling trips abroad, said it was “beyond comprehension” that McCourt would be free to drive again in five years’ time.

In a press release from CTC, which is also calling on all of its members in Scotland to write to the Lord Advocate about the case, she added: “A holiday with mum was a lovely habit we enjoyed. There can't be many mother and daughter friendships close enough to want to spend holidays together for 45 years.”