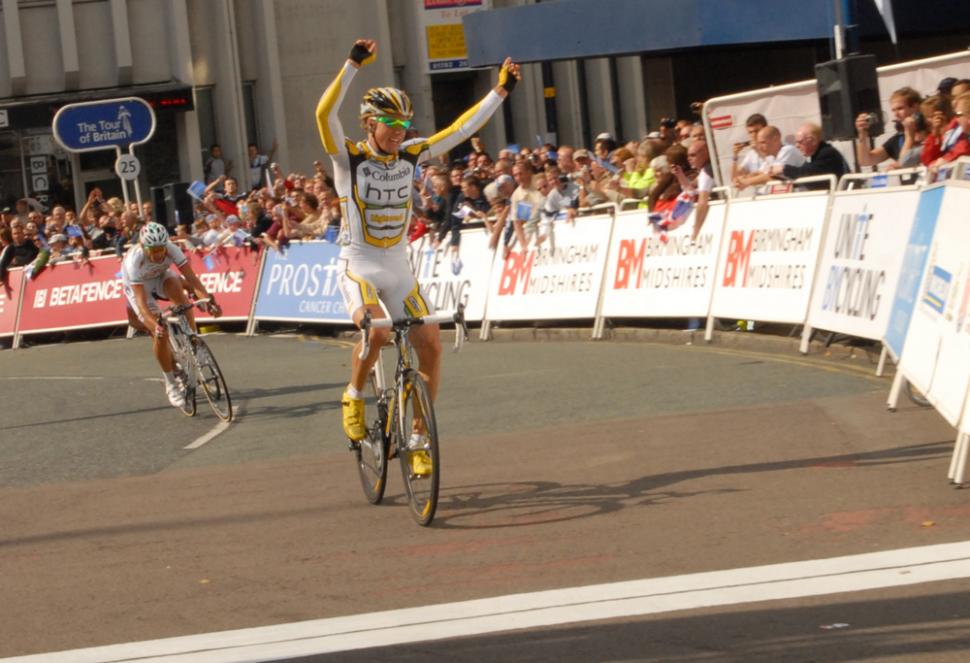 Edvald Boasson Hagen completed a hat-trick of stage wins in this year's Tour of Britain in Stoke today and in the process moved into the overall lead of the race, the 10 second time bonus for the stage win being enough to give him a 9 second lead over Dutchman Kai Reus of Rabobank.

Boasson Hagen won in Stoke last year and afterwards said that he'd watched the stage finish from a year ago on Youtube to help him prepare for today: it worked. With 5Km to go the day's break was caught, with local rider Dan Fleeman (Cervelo Test Team) amongst its number and it was obvious the sprinters would once again have their day. Columbia's dominance of these things was further enhanced before the stage even started with the news that Bradley Wiggins had withdrawn from the race – reducing the Garmin team to four men and depriving third placed overall Chris Sutton of a valuable part of his sprint train.

As it was Boasson Hagen dropped the hammer with 500m to go, out sprinting the Italian Filippo Pozzato to finish two bike lengths clear at the line.

Even though Boasson Hagen and Columbia look a very powerful proposition, given the close fought nature of the race it is still all to play for. Reus is only nine seconds back, with Sutton on 14 seconds, Martin Reimer on 17 and Russell Downing on 29, with last year's winner Geoffrey Lequatre one second down on him.

On Thursday the Tour of Britain comes to the West Country for the first of two stages before the finale in London. Tomorrow it's a 183.7Km leg stretcher from Frome to Bideford.

Top 10 on General Classification after Stage 5

For full results visit the Tour of Britain website