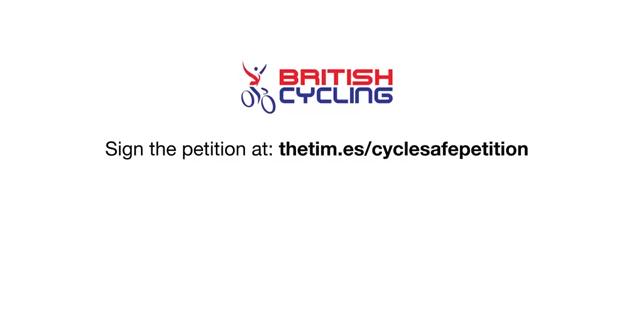 Boardman, Trott, and Brailsford call for action to transform cycling in the UK
by Tony Farrelly

In a video produced by British Cycling urging people to sign, Chris Boardman calls for the reallocation of a proportion of the transport budget to cycling, saying that the current piecemeal approach doesn't work and again calling on government to ensure that a minimum of £10 per head is spend on cycling infrastructure in the UK and that all new roads schemes include mandatory provision for cyclists. Laura Trott meanwhile calls for cycling proficiency to be made part of the national curriculum.

The petition currently has 46,684 signatories and needs 100,000 to stand a chance of being debated in Parliament - that chance can only be further increased if it reaches it's 100,000 target quickly - so far it is almost half way there in a little more than a week, it has a year to make the target.

So, if everyone who has already signed it finds just one other person to support the petition, that target will be very close.

Boardman, who now acts as policy advisor to British Cycling and was one of the contributors to the report, said: “ We’re getting there but we need your help to really keep up the momentum on this vital issue.”

Trott added: “There are two million people in this country cycling at least once a week. If even 10% of those people signed the petition we’d be well on our way to making the government stand up and listen.”

The text of the petition, which you can sign here, reads:

We the undersigned call on the Prime Minister to pledge that the Government will implement the recommendations in the 'Get Britain Cycling' parliamentary report.

The inquiry, chaired by a cross-party panel of MPs and peers, heard that promoting cycling as a healthy and affordable way to travel can tackle Britain's obesity crisis, save millions from NHS budgets, boost the economy and reduce congestion on our roads and trains.

This will require cross-departmental consensus led from the Cabinet Office and Downing Street, not just from the Department for Transport.

In the Commons on February 22, 2012, the Prime Minister said of The Times's ‘Cities Fit for Cycling’ campaign: “If we want to encourage the growth in cycling we’ve seen in recent years, we need to get behind campaigns like this.”

Now is the time to act on those words.