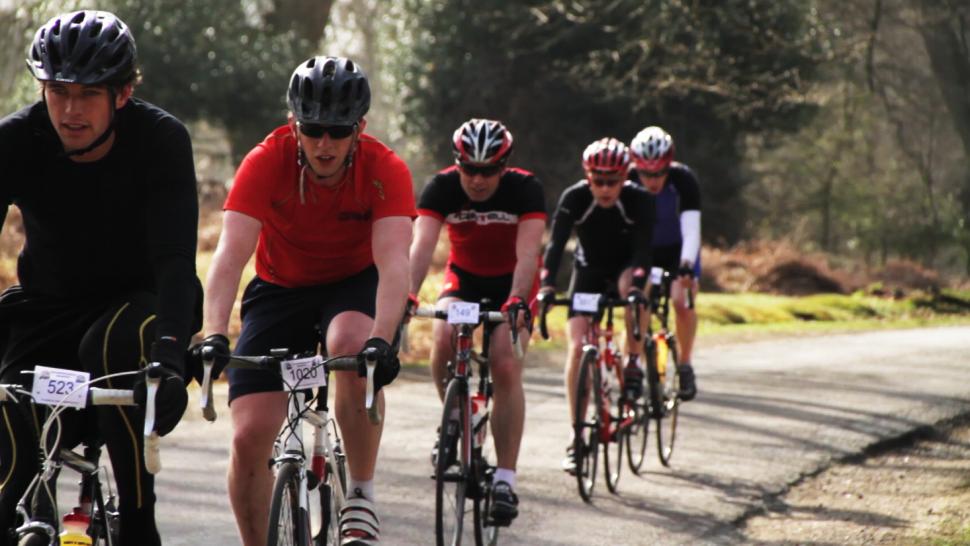 New Forest Spring Sportive 2010, the first in the Wiggle Super Series and sponsored by Verenti Bikes

It has emerged that attempts were made to sabotage the Wiggle New Forest Spring Sportive this weekend, with in excess of 1,000 signs vandalised, drawing pins scattered on the road and motorists driving slowly to form a kind of rolling road block, reports the Southern Daily Echo. The event has been the subject of vociferous opposition from some locals.

The incidents took place on Saturday, the first of two planned days of riding, although as we reported yesterday, the second day was cancelled due to heavy rain causing the field that hosted the event headquarters in Brockenhurst to become waterlogged.

The Southern Daily Echo says that while event marshals swept drawing pins from the road at Boldre, some of the near 2,000 riders taking part on Saturday still suffered punctures. Earlier, organisers had also had to replace signs that had been defaced or torn down.

Martin Barden from the organisers, UK Cycling Events, confirmed that no-one was injured, but said that he was “appalled” at the attempted sabotaging of the event, which he said included cars being driven slowly to block riders.

“A small minority of people have taken to vigilante lengths to stop the events,” he said. “Their behaviour is unacceptable.”

He added that the saboteurs “have tried to ruin the day for everyone and tried to endanger cyclists.

“Luckily that hasn’t happened, due to sheer luck, but the attempt to injure a cyclist has been there.

“I think it is appalling. It’s all been reported to the police.

“It is a very small-minded type of attitude. If we hadn’t been on top of it, it could have caused serious harm.”

However, he said that most participants had been unaware of the issues, that most locals had given a welcome to riders in the event, now in its fifth year, and that his company kept numbers low so as to minimise impact on the area.

“We could have had 10,000 people here but we reduced the figures. We did it consciously to be considerate to the local residents. The same courtesy has not been extended the other way, in some parts. ”

He said: “It could have caused accidents and could have potentially been very serious. Anyone who cycled over the tacks could have been injured. If someone had done that, that’s reprehensible.”

Much of the opposition to the event, and similar mass rides in the area, surrounds the perceived danger posed by cyclists to local livestock, including horses; however, it is motor vehicles that are responsible for the death of around 70 New Forest Ponies each year, according to the New Forest National Park Authority.

While many locals, whether in the New Forest or elsewhere, welcome sportives which also bring money into the local economy, attempts to sabotage such events do happen, although they are rare; Saturday’s incidents are reminiscent of similar incidents at the Etape Caledonia in previous years.