The carbon wheel market is hotting up. Strada Wheels, the West Sussex-based wheel building company, used Bespoked Bristol to announce they have become the exclusive UK distributor for these new Rail 52 carbon clincher rims. They're a  proprietary rim design by Mike and Dave of November Bicycles in the US.

They've actually had their own mould cut for these rims, so you won't find this shape anywhere else. Getting your own moulds cut is jolly expensive. The Rail 52 is a carbon clincher and uses a toroidal rim shape (a sort of bulbous rounded profile) with a wider rim section, generally a shape regarded as being faster than the previous generation V-section rims. 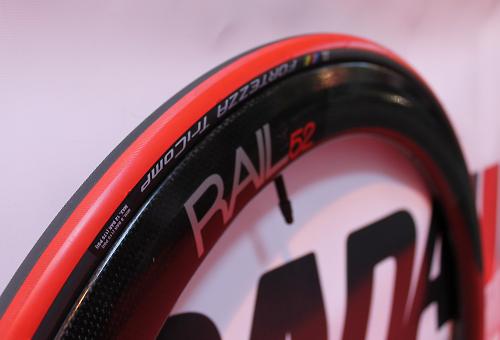 The Rail 52 takes things a step further with an angled braking track, to smooth the airflow around the tyre and further increase its aerodynamic performance in a range of yaw angles (the direction of wind hitting the wheel rim). The rim is 25mm wide at the brake track with an 18mm internal width.

The rim has been constructed with high Tg resins, capable of withstanding up to 350 degrees farenheit without warping or delamination. The wheels will be sold  with new SwissStop Black Prince brake pads that are claimed to reduce heat buildup during braking by 35%.

Strada have the exclusive distribution rights in the UK and this is actually the first pre-production rim out of the factory. So fresh in fact that is doesn't have the correct finish, production versions will have a matte unidirectional carbon finish rather than what you see in the photos here. 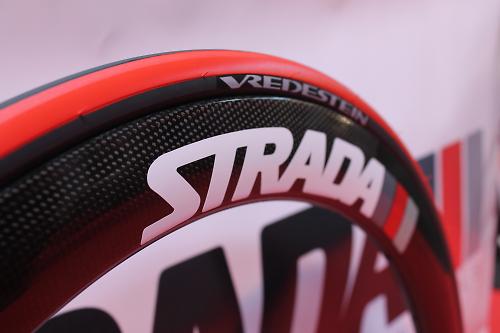 The rim weighs just 480g and built up with a set of Chris King R45 hubs and 20/24 Sapim CX Ray spokes, weight is 1500g on the nose. As usual, Strada will offer a range of hub and spoke options. There are plans for a 30-32mm rim for those wanting a shallower design.

Wheelsets will cost between £1,100 and £1,540. They're expecting to have availbilty in about six weeks. We're going to get a closer look at the wheels when they land properly in the UK. In the meantime, there's some interesting stuff on the aero properties of the rim on November Bicycle's blog  and you can visit www.stradawheels.co.uk for more info.

Strada's Jon was also keen to show us their new range of coloured logo stickers, including red and this flouro yellow. My abilities with the camera don't do it justice. Custom is something Strada do, they showed us some very fine hand polished bladed spokes that looked just divine, and told us one story of  a Australian customer that they produced a wheelset with spoke nipples based on the Australian flag. Neat.