Component manufacturer Ritchey have unveiled their latest all-carbon components, including two handlebars and a stem. We brought you a quick first look at the new range last year, and the full range is now available to buy.

The new Carbon C260 (€299) is Ritchey’s first full-carbon stem, and was designed for the rigours of Classics racing. If a component can survive there, it’s fair to say it can survive anywhere, and that rubber seal of approval was enough for Ritchey to make it available in their 2013 model year.

It’s made from high modulus carbon fibre and uses the same 260 degree handlebar clamp as the aluminium stem we tested last year. Rather than the stem wrapping just 180 degrees around the bar, the increased wrappage lets Ritchey claim reduce bolt stress with the larger surface contact area. 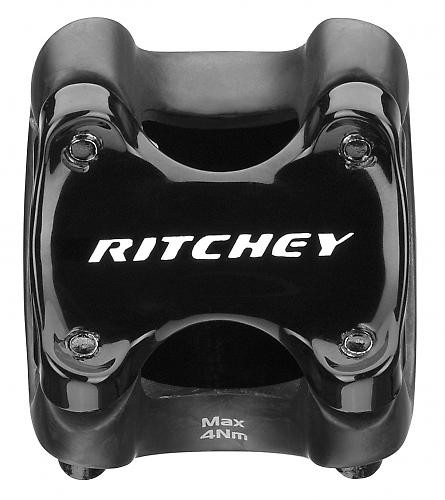 There are four faceplate bolts, and they thread in from the back. Three opposing bolts secure the stem to the steerer tube. It’s available in lengths from 90 to 130mm, and the weight for a 110mm version is 125g. That’s really not much lighter than the aluminium version, but if you really must have carbon everything...

You can match the stem with the SuperLogic Evo-Curve (€345) all-carbon handlebar. A one-piece high modulus carbon fibre with a matte unidirectional carbon finish gives a weight of just 195g. It’s a short reach bar with a shallow drop and 4° sweep. The centre section is fine to clamp aero bars to and there’s a no-slip finish at the stem and brake lever areas.

The SuperLogic Logic II (€354) handlebar has a reach and drop proportional to the bar width. The wider the bar, the greater reach and deeper it is. It has an anatomical bend and the ends are angled to give forearm clearance when you’re on the drops. It’s also aerobar compatible and has the same non-slip grit finish at the stem and brake lever mounting areas. It weighs 190g.

Finally, complete the set with the SuperLogic One-Bolt seatpost (€280). It’s Ritchey’s lightest seatpost owing to the carbon construction and weighs just 148g for a 27.2mm/300mm option. Their SideBinder clamp design uses a single 5mm Allen bolt so adjustment should be quick and easy, and the wide clamp design is claimed to reduce stress on the lightweight saddle rails. The clamp can be swapped to suit different rail diameters.